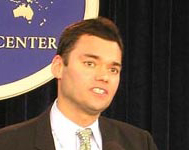 Peter Beinart and J Street have teamed up to deliver a message to Israel and its supporters: The West Bank is just like the segregated South.

"You understand that an American Jewish community that sent its sons and daughters to Mississippi when African Americans were denied equal citizenship merely because they were not white cannot turn away when millions of West Bank Palestinians are denied rights simply because they are not Jews," Beinart wrote in a press release sent yesterday under the J Street masthead.

Beinart, a former editor of the New Republic, has become increasingly critical of the Jewish state over the years, and has wholeheartedly embraced J Street’s controversial credo—one that calls on the Jewish state to make peace with the Palestinians at any cost, even at the expense of Israel’s longstanding security needs.

Asked Thursday to both confirm and clarify his remarks, Beinart doubled down on the comparison between Israel’s West Bank and the Jim Crow-era South.

"As a Zionist who believes in the dream of a democratic Jewish state, I believe that part of what makes Israel precious is the commitment in its declaration of Independence to ‘complete equality of social and political rights.’

Within the green line, Israel strives to live out those principles by granting citizenship to its Arab residents," Beinart wrote via e-mail. "In the West Bank, by contrast, citizenship is ethnically based. Jews have it; Palestinians don't. That violates the pledge in Israel's founding document and must be remedied by creating a Palestinian state."

Beinart said this is a point he has "made many times in speeches."

Pro-Israel observers on Capitol Hill and elsewhere slammed Beinart and J Street for employing language that both delegitimizes the Jewish state and provides ammunition to Israel’s harshest critics.

"So long as J Street and Beinart and their allies on the left employ rhetoric that draws parallels between Israel and the segregated South, they will not be taken seriously by people who matter on the Hill, in the [Obama] administration, or within the mainstream pro-Israel community," said a source on Capitol Hill. "It is sad that Peter Beinart went from a respected intellectual on these issues to someone who provides cover for fringe ideas on the left."

Noah Pollak, executive director of the Emergency Committee for Israel, went even further. He accused Beinart and J Street of engaging in "moral blackmail." (The chairman of the Center For American Freedom, Michael Goldfarb, is also an adviser to ECI.)

"Beinart," Pollak added, "is not actually outraged that the Palestinians don't have a state. He's cynically using them—just as J Street does—as a means to spread lies and hatred against Israel and sell copies of his book."