Taxpayer-funded app includes tips on how to create 'enjoyable sexual encounters,' 'self-pleasuring,' 'condom and lube use'

The National Institutes of Health is spending over $1.1 million creating a mobile app to connect transwomen and a "sex-positive" app that creates "hooking up simulations" for black gay teenagers.

dfusion, inc., a "science-based" technology company based in California, received the funding for two apps, including, "T3," which stands for "Tune In! Turn Up! Turn On!"

Once developed, the app will include "hooking up simulations" and tips for young gay teenagers on "self-pleasuring," "condom and lube use," and how to create "enjoyable sexual encounters."

The app will also include features common on dating apps, such as a chat tool and a GPS locater. The researchers said they want to meet young black men who have sex with men, or YBMSM, "where they are."

"For example, we'll include content on connecting to the LGBTQ community, creating able sexual encounters, building healthy relationships, self-pleasuring, and sexual communication while also talking about HIV/STI testing and risk reduction, emphasizing strategies like condom and lube use, partner reduction, and avoidance of concurrent partners," the researchers said.

Screenshots of the app prototype posted by dfusion show simulated chats with users. 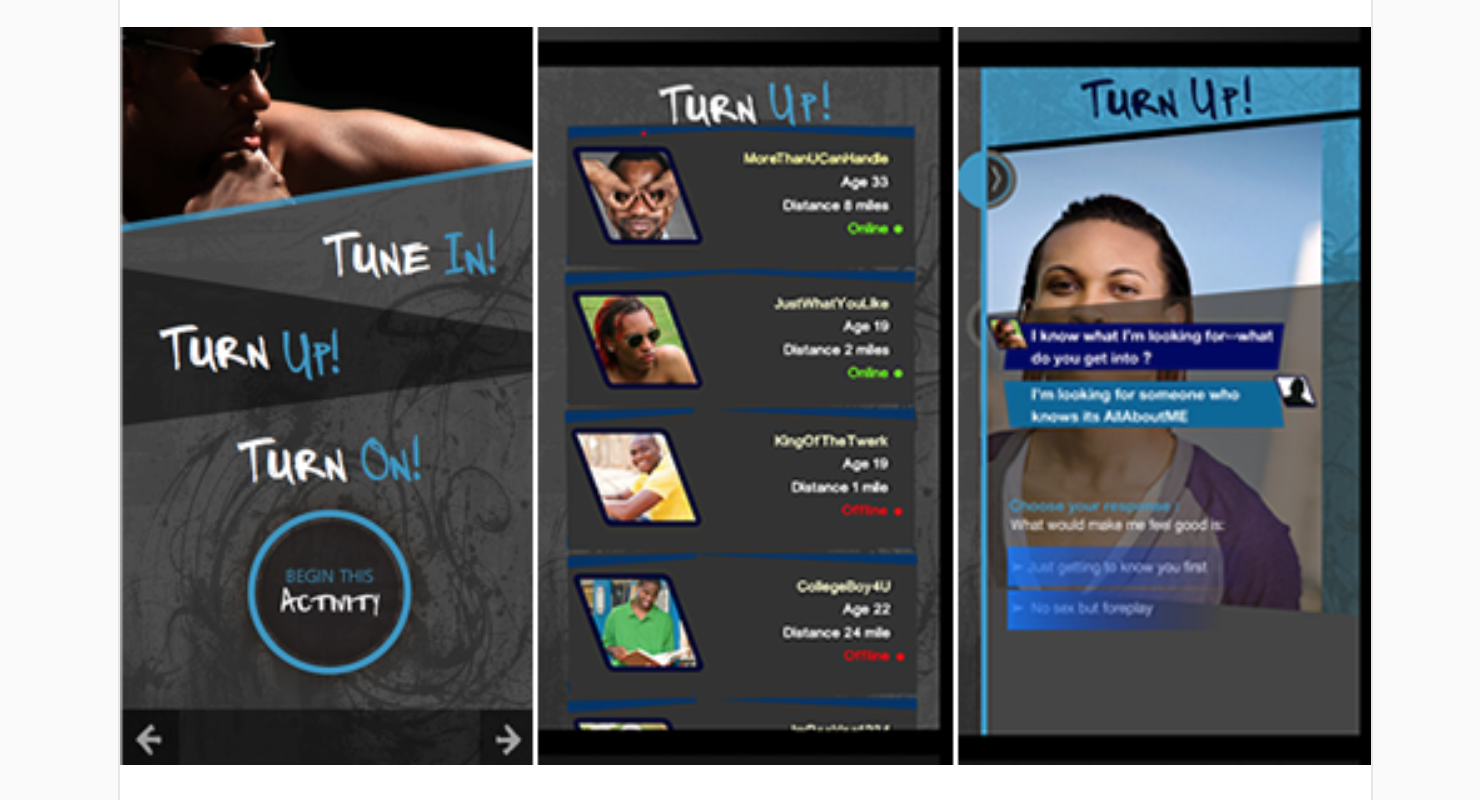 A simulated discussion on the app begins, "I know what I'm looking for, what do you get into?"

"I'm looking for someone who knows it's AllABoutMe," a user responds.

The app then prompts the user to choose a response. "What would make me feel good is: Just getting to know you first or No sex but foreplay."

Another screenshot of the app asks users, "What's your pleasure profile."

One "pleasure principle" to chose from is "It's all about ME!"

"All About Me: are learning how to love on themselves," a message on the app explains. "If this is you then you're a fan of pleasure via touch and can likely live with or without penetration." 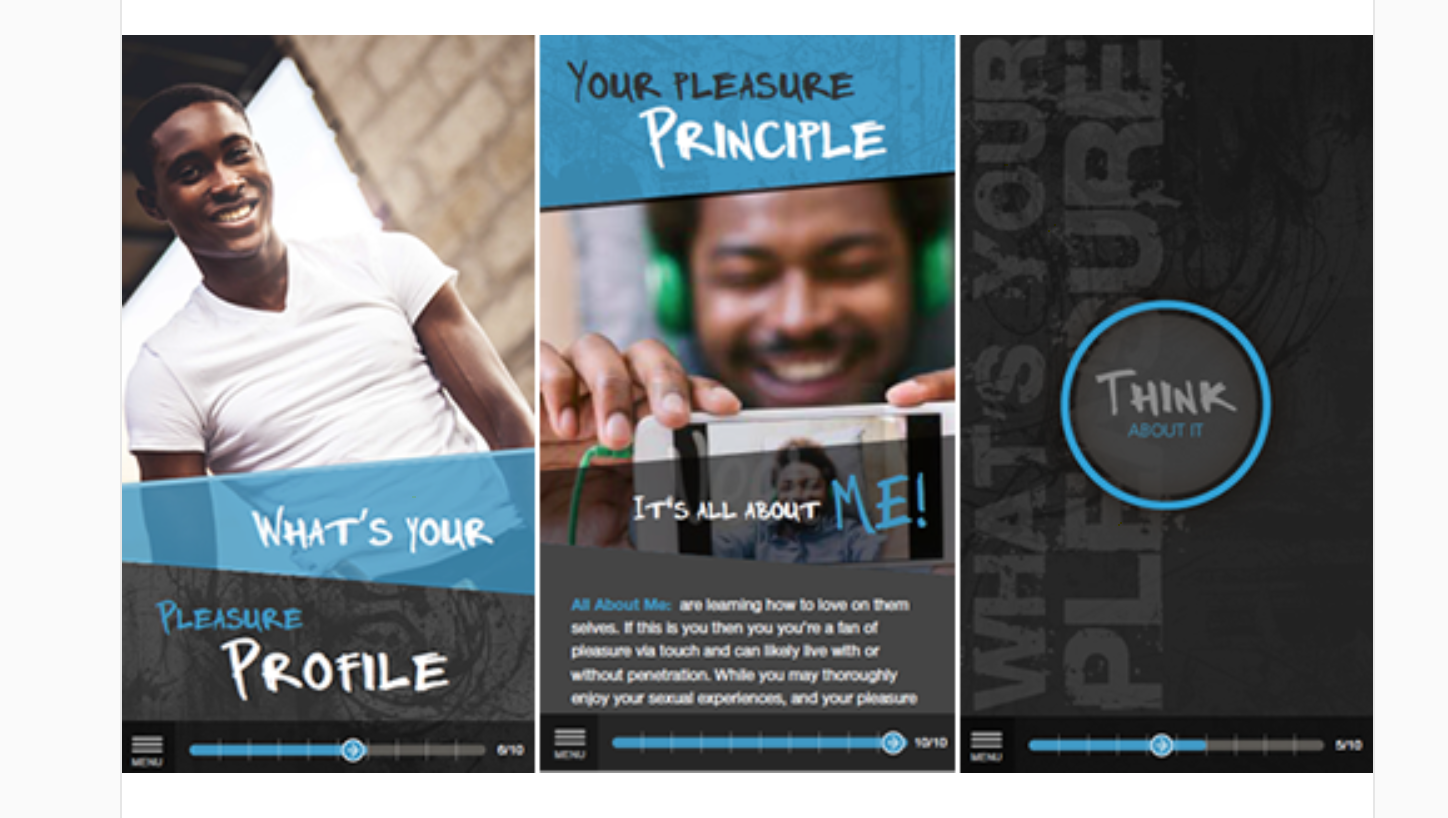 The project began in 2015 with $224,838 from taxpayers, which was used for focus groups and to develop the app prototype.

The focus groups of black gay teens between the ages of 14 and 17 took place in Oakland, Calif., Newark, N.J., and Washington, D.C., to "learn about their sexual health and relationship concerns and challenges."

"These findings helped inform the questions we posed in one-on-one interviews with an additional 12 [young black men who have sex with men] YBMSM," the researchers said. "These interviews were conducted in Newark, Philadelphia, and Dallas by a researcher who identifies as a gay Black man."

The "major takeaways" were young black gay men "really want to see examples of healthy relationships" and the struggles of being a "gangster and gay" at the same time.

"In both the focus groups and interviews, we heard considerable discussion about conflicts over personal and public identities," the researchers said.

"Participants talked about how they often felt they had to manipulate their sexual identity in order to not be in conflict with other identities. For example, one young man talked about the importance of being perceived as gangster, but then noted: ‘Most people say you can't be gangster and gay.'"

Others said they do not often talk about sexually transmitted diseases with their sex partners.

"I ain't never talk to no guy that had a disease, so I wouldn't even know what to expect," said one participant.

"Most people living my lifestyle, which is in the fast lane. … Most of the time we meet girls at clubs or meet dudes at the clubs," said another. "Hey man, it is what it is. We might not have sex that night. We might have sex about three days later or a week later. No, it never really just popped up in mind to be like, ‘Hey man, you HIV positive?' I feel like I'm embarrassed."

After receiving an additional $724,745 to create the app in April, the researchers said they will now focus on a "more rigorous examination of the concept of intersectionality and identity in the lives of YBMSM."

dfusion also received taxpayer funding for "Transwomen Connected," which will "fill an important product niche" of providing a sexual health app for men who identify as women.

The grant for the NIH study explains the researchers are using the theory of gender affirmation "guided by an expert panel of transgender women of color" to create the app.

The company says it has been awarded 26 projects from the NIH. Another taxpayer-funded app dfusion is creating is "Making Proud Choices," an app that uses avatars to teach teenagers about safe sex. The project has received $224,957.