Susan B. Anthony List posted two ads to Facebook telling the stories of two babies, Charlotte Ryun and Micah Pickering, who survived premature births. The videos featured testimony from the babies' parents, as well as ultrasound footage and other baby pictures provided by the families. One 30-second spot featured Iowa native Danielle Pickering discussing the birth of her son, Micah, at 22 weeks gestation.

"We didn't know if he could survive," Pickering says as a photo of Micah in the NICU flashes across the screen. "Micah today is a wonderful little boy."

Facebook is one of the largest depositories of ultrasounds and newborn photos in the world. Nevertheless it removed the ads without explanation, according to SBA List. When pressed on the reason for the deletions, the social media giant told the group the videos ran afoul of its prohibition on video that shows "medical procedures or conditions."

It initially denied the request to reinstate both ads, though on further appeal it lifted the ban on the spot featuring Charlotte. Facebook has yet to reinstate Micah's ad. The deletion of the SBA List ad comes just months after Facebook banned international pro-life ads from running in Ireland during the successful referendum to overturn the country's ban on abortion. SBA List spokesman Mallory Quigley said there was nothing offensive or sensational about the stories depicted in the videos. The testimony was meant to draw attention to the fact that current U.S. law allows doctors to abort babies of similar gestational age.

"They are simply powerful, real stories of children, Micah and Charlotte, who were born prematurely," she said. "Our nation’s laws permit abortion at the same gestational age at which these children were born and, thankfully, provided lifesaving care."

Danielle Pickering takes issue with late-term abortion after telling the story of her son.

"For somebody to say that a baby at 20 weeks doesn't have the right to live, I want to tell them to come and see my kid," she says as the boy plays with a toy lawn mower in the background.

A Facebook spokesman emphasized that SBA List continues to post a number of advertisements on the site without issue. The company said that it takes no official position on the abortion debate, though it requires groups to include a "paid for" disclosure in its ads. The company emphasized that ads are held to a higher standard than individual user's posts, which is why something like an ultrasound or NICU picture can cause an ad to be deleted.

"We allow this type of content on Facebook but in some cases our Advertising Policies (the rules around advertisements which receive paid distribution) are stricter than our Community Standards (which relates to what can be posted on Facebook)," the company said in an email.

SBA List said the pro-life movement is being directly targeted by social media groups. Deleting these ads just weeks before the midterm elections advance the pro-abortion argument, just as it did in Ireland, according to Quigley.

"Facebook is censoring our campaign, slowing us down in the final days ahead of the election," she said.

Silicon Valley groups have faced increased scrutiny from lawmakers on both sides of the aisle. A number of social media executives were called before Congress following the 2016 election. They have been grilled by Democrats about Russian troll operations and by Republicans about perceived bias. Berin Szóka, president of the Tech Freedom think tank, said that nothing should force websites like Facebook to host advertisements of any kind, calling criticism of Facebook "part of a larger assault on private companies" and the First Amendment.

"What you cannot do is compel private speakers to carry opinions or material they find objectionable," he said.

He also took issue with the idea that advertising should be treated the same as content posted by users. In the realm of social media, ads are sold based on the idea of a captive audience whereas users are free to curate their friend list if they want to avoid certain materials.

"Advertisements by definition are shown to us by people who are not our friends. It makes sense Facebook and everyone else are more stringent about moderating that content," he said.

Some social conservative organizations have stressed that they are not looking to compel any group, but instead are asking companies like Facebook to live up to their values as open platforms. Dan Gainor, vice president at the watchdog group Media Research Center, said social media companies have mishandled cultural debates by choosing sides.

"The pro-life side simply isn't treated the same as the pro-abortion side," he said in an email. "Facebook, in particular, needs to back off its restrictions on issue ads on topics like abortion. We don't want them to limit speech. We want them to allow it." 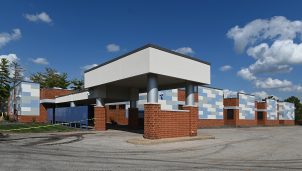 Abortion Clinics Back Off Supreme Court Challenge to Pandemic-Related Restrictions