Zainab Javed has previously called for guns to be taken away but she took it a step further when she retweeted a left-wing Twitter user saying protesters were engaging in acts of terror by being armed.

"To be clear, this is Terrorism. This isn’t a peaceful protest; they’re amassing this heavily armed for the specific implication that if the Virginia Government doesn’t meet their demands, they will incite violence," wrote a Twitter user with the handle @PanasonicDX4500. 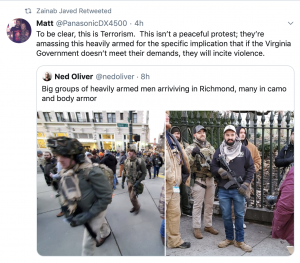 Javed and the DGA did not respond to requests for comment.

Washington Free Beacon reporter Stephen Gutowski spoke to attendees and reported the rally was free of violence and racist displays, tweeting that it "was focused on gun rights."

People are begining to clear out as the rally comes to an end. The attendence was massive. There was no violence, disturbance, or really any consternation from what I witnessed. I did not see any racist displays whatsoever. Everyone in attendance was focused on gun rights.

NBC also reported that the rally "was largely peaceful, with no reported violence."