Despite 10-year-low unemployment, California took advantage of loopholes in federal regulation to keep more than 800,000 federal welfare recipients from having to work.

This conclusion is based on the response of the U.S. Department of Agriculture to an application to waive SNAP's work requirements for 55 of California's 58 counties, issued to the state in July and recently obtained by the Washington Free Beacon.

California's waiver, which will last until August of 2019, exempts more than 800,000 able-bodied, childless Californians from having to work while on SNAP. This in spite of the fact that California's unemployment rate—4.2 percent—is at its lowest level in at least 10 years. 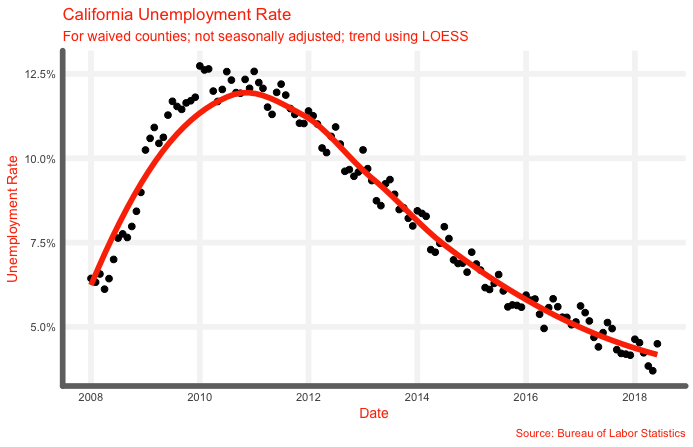 About 42 million people nationwide receive federal welfare benefits under the Supplemental Nutrition Assistance Program. Some SNAP recipients—able-bodied adults without dependents, commonly called "ABAWDs"—are required under law to work at least 20 hours a week, or spend equivalent time in education and training programs, in order to continue receiving SNAP benefits. If an ABAWD fails to meet these requirements for three months, they lose their benefits.

In principle, states should receive waivers in times of economic hardship, when jobs are hard to find. But California, one of 33 states to have a partial or total waiver, has extended its waiver in spite of its low unemployment rate.

All of this indicates that many Californian ABAWDs—78 percent of whom do not work—are not stymied by a weak economy, but rather are being protected from work requirements for some other reason.

And third, the two-year period can't begin earlier than the period the federal government uses to assess which areas of the country have an unemployment rate 20 percent higher than the national average. The new 24-month period is set by the Department of Labor every fiscal year, beginning Oct. 1.

This meant that the 55 counties had a cumulative unemployment rate of 5.9 percent for the two-year period, compared with a 4.95 percent rate for the same period nationwide. This, USDA concluded, was enough to garner a work waiver.

This delicate balance shows how California massaged statistics to produce a high unemployment rate amid huge prosperity. For example, had California filed in October, it would have been required to use a range beginning no earlier than January 2016. If it had done this—by virtue of its steadily declining unemployment rate, as depicted above—then the unemployment rate in its defined contiguous area could not have been 20 percent higher than the national one.

Assuming, for example, that California had selected the range January 2016 to January 2018, the nationwide rate would be 4.61 percent, while the unemployment rate across the 55 counties would be 5.3 percent, just 14 percent higher.

The consequence of all this is that, in the middle of a booming economy, hundreds of thousands of able-bodied, childless Californians won't be obliged to work. Many will opt not to.

The key loophole California took advantage of—the combination of contiguous areas—is addressed in the House of Representative's version of the 2018 farm bill. The bill stipulates that, in general, waivers can only be sought for individual counties or the whole state, not for contiguous areas. The farm bill has passed the House and, in a different form, the Senate, but now must go through a reconciliation process that will turn in part on major differences in how SNAP is administered.

The California Department of Social Services did not respond to a request for comment for this article.