THEY GIVE UP … "Associated Press unable to declare winner of Iowa caucuses," via AP: With 97% of precincts reporting from Monday’s caucuses, former South Bend, Indiana, mayor Pete Buttigieg leads Vermont senator Bernie Sanders by three state delegate equivalents out of 2,098 counted. That is a margin of 0.14 percentage points.

OFF THE RESERVATION … "Women of color bolt Warren’s Nevada campaign in frustration," via POLITICO: Three of them said they felt marginalized by the campaign, a situation they said didn’t change or worsened after they took their concerns to their superiors or to human resources staff …

"During the time I was employed with Nevada for [Elizabeth] Warren, there was definitely something wrong with the culture," said Megan Lewis, who joined the campaign in May and departed in December. "I filed a complaint with HR, but the follow-up I received left me feeling as though I needed to make myself smaller or change who I was to fit into the office culture."

THE MATH DIDN’T ADD UP … "Yang fires dozens of staffers after Iowa debacle," via POLITICO: Among those dismissed were the national political and policy directors of the campaign, as well as the deputy national political director—all senior-level positions …

Former campaign employees who were granted anonymity to speak candidly said many people expected staffing changes after New Hampshire, not Iowa. They were disturbed by how some people learned they were let go, such as when their email and Slack accounts were cut off.

GET A FOOD TASTER … "Hillary Clinton on being vice president: ‘Never say never’," via NY POST: Talk show host Ellen DeGeneres asked whether she’d agree to be on the ticket of the of the eventual Democratic nominee, if she were asked … Pushed on the question, Clinton, 72, reluctantly said she’d consider it.

"I never say never because I believe in serving my country, but it’s never going to happen," she said.

SWALWELL LETS IT RIP … "Swalwell to release book giving ‘inside account' of Trump's impeachment," via THE HILL: "It’s my inside account of America’s public servants stepping up and Congress taking action to rein in a president who put his own interests over national security and our elections’ integrity," [Rep. Eric] Swalwell, a former 2020 White House hopeful, said in a statement.

PROBABLY SOON TO BE FORMER CEO … "Shadow Inc. CEO’s ‘Plan Ahead’ Mantra Backfires During Iowa Debacle," by WFB’s Alex Griswold: The CEO of Shadow Inc. urged his Twitter followers to "plan ahead" even as his tech firm's app derailed the Democratic Iowa caucus.

Gerard Niemira protected his Twitter account after Shadow's Iowa caucus reporting app failed due to multiple glitches Monday … Despite these measures, social media users could still see the CEO's banner image, a humorous cross-stitch pattern in which the phrase "Plan Ahead" fails to fit in a box it was intended for. 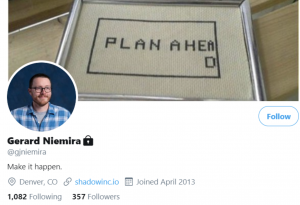 THE 1980s CALLED … "Senate Report Criticizes Response to Russian Meddling and Blames Partisanship," via NYT: "[Barack] Obama warned [Vladimir] Putin in a note that "the kind of consequences that he could anticipate would be powerfully impactful to their economy and far exceed anything that he had seen to date," the report said, citing an interview with Susan E. Rice, Mr. Obama’s national security adviser at the time.

But those warnings fell short, said Marc Polymeropoulos, a CIA official who retired last year. He said that it had become clear that officials should have undertaken a more effective public campaign.

COMFORTING … "Report: DHS Not Prepared to Secure 2020 Elections," by WFB’s Adam Kredo: While DHS’s Cybersecurity and Infrastructure Security Agency (CISA) has made strides in implementing election security plans in recent years, it "is not well-positioned to execute a nationwide strategy for securing election infrastructure prior to the start of the 2020 election cycle," according to the Government Accountability Office, which investigates election security.

China Daily has spent millions to publish state-sanctioned propaganda in top American newspapers without registering as a foreign agent, prompting Rep. Jim Banks (R., Ind.), Sen. Tom Cotton (R., Ark.), and 33 other members of Congress to demand a probe into the outlet's activities.

BOLD STRATEGY … "Brave New World: Anonymous Journo Bashes ‘No Backbone’ Republicans in NYT Op-Ed by Democratic Politician," by WFB’s Andrew Stiles: In an effort to make his case, [Sen. Sherrod] Brown cites a "journalist" who allegedly asked him, "how in the world can these [Republican] senators walk around here upright when they have no backbone" …

NYT editorial writer Binyamin Appelbaum remarked that the paper was "inverting standard Washington practice" by publishing an anonymous quote from a journalist in an article by a Democratic politician. Again, a distinction without much of a difference, given the Washington press corps's general hostility toward Republicans.

Under current state requirements, students in grades five, seven, and nine are required to take a physical fitness test, which includes the one-mile run, curl-ups, push-ups, and a measure of body mass index.

WHY RUSH MATTERS … "The Era of Limbaugh," by WFB’s Matthew Continetti: [Rush Limbaugh’s] shocking announcement this week that he has advanced lung cancer, and his appearance at the State of the Union, where President Trump awarded him the Presidential Medal of Freedom, are occasions to reflect on his impact. It's one thing to excel in your field. It's another to create the field in which you excel …

[Trump’s] presidency is another reminder of Limbaugh's staying power. The American right has been molded in his anti-elitist, grassroots, demotic, irreverent, patriotic, hard-charging image. Rush Limbaugh is not just a talk show host. He defines an era.