Ocasio-Cortez responded to the story of a black man given 10 days in jail for missing jury duty by saying that lawmakers needed to explore the mass release of America's prison population.

"Mass incarceration is our American reality," she said in a tweet. "It is a system whose logic evolved from the same lineage as Jim Crow, American apartheid, & slavery. To end it, we have to change. That means we need to have a real conversation about decarceration & prison abolition in this country."

"Prison abolition" is a proposal popular with the international far-left, which calls for "deep, structural reforms to how we handle and even think about crime in our country." In general, abolitionists favor abolishing prisons and other systems of punishment, replacing them with "restorative justice" and social welfare programs meant to target the "root causes" of crime.

The Democratic Socialists of America, with which Ocasio-Cortez is affiliated, passed a resolution at its 2019 convention establishing a prison-abolition working group.

In a series of follow-up tweets, Ocasio-Cortez backtracked on her initial message. She said her aim was to reduce the prison population size, rather than abolish correctional institutions.

"First of all, many people in jailed or in prison don’t belong there at all," she wrote. "Whether it’s punitive sentencing for marijuana possession or jailing people for their poverty & letting the rich free through systems like cash bail, we wrongly incarcerate far, far too many people."

In fact, 55 percent of all state-level offenders—who represent 88 percent of all incarcerees—are in prison for violent offenses. Roughly half of federal offenders are incarcerated for drug offenses, but "more than 99 percent" were drug traffickers, according to the BJS.

In a follow-up tweet, Ocasio-Cortez responded to those pointing to the violent incarcerated population by writing, "Our lawmaking process means we come to solutions together, & either way we should work to an end where our prison system is dramatically smaller than it is today." 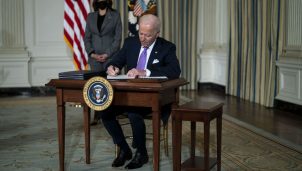