U.S. birth rates hit a record low in 2017, according to new data released by the Center for Disease Control. 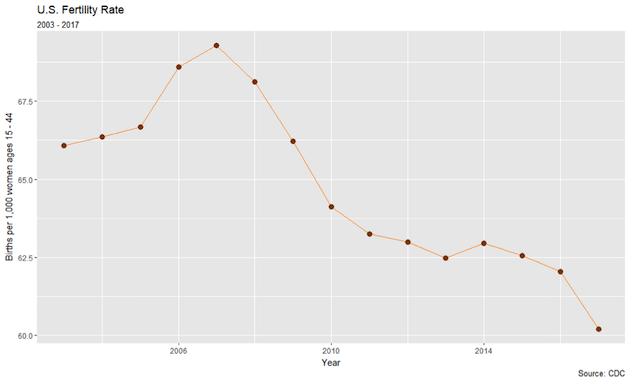 Also in 2017, the total fertility rate—the number of children 1,000 women would be projected to have over their lifetime given current trends—hit a 40-year low, reaching lifetime 1.76 children per childbearing-age woman. This number is below the 2.1 per woman referred to as the "replacement rate," referring to the rate of childbearing needed to sustain population levels.

The precipitous drop beginning in 2008 may be attributable to the Great Recession, as families opted to put off childbearing in the face of a collapsing economy. But as economic indicators continue to recover to pre-recession levels, fertility has continued to fall, suggesting deeper trends may be at play.

Indeed, a fertility rate that persists below replacement may pose substantial cultural and economic challenges going forward. A decline in births means fewer people, translating into less human capital overall, harming America's productive prowess. On the entitlement end of the scale, the glut of people born during the postwar baby boom now reaching retirement means that the number of workers per retired American will continue to decline to unsustainable levels.

So what is causing America's baby bust? Experts are divided, but point to a number of factors with at least some explanatory value. More effective contraception is a factor, although abortion's legality is not—abortion rates have in fact fallen along with fertility, hitting historic lows in 2014. 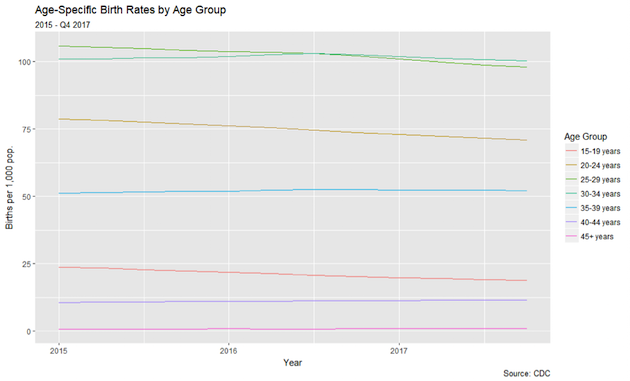 These stats are part of a long-running trend in the age-differentiated birth rates: Fewer younger women are choosing to have children, while their older peers are having slightly more children, but not enough to make up the shortfall.

This deferral is apparent in more than just childbirth. Analyses show that Americans are opting to marry and have sex later than their predecessors. That teens are having less sex is likely good news, all things considered; the CDC found that teen birthrates have also hit historic lows. However, that trend seems to extend into Millennials' early 20s, as members of that generation appear to be having less sex than preceding generations did in their 20s and 30s.

Americans are getting married later and fewer of them are married overall, a fact that is likely connected to the baby bust. The proportion of children born out of wedlock has risen substantially over the past 60 years, accounting today for about 40 percent of all births. At the same time, unwed people as a category are less likely to have children than their married counterparts, meaning that a rise in unwed childbearing likely means fewer children overall.

Demographer Lyman Stone, presenting at the American Enterprise Institute on Thursday, noted the overwhelming majority of births which would have happened had fertility rates remained at 2008 levels are attributable to a decline in out-of-wedlock births.

There might be another reason for the fertility drop between 2016 and 2017: President Donald Trump's toughened immigration policy. Pew's Gretchen Livingston has shown that as births to native-born mothers fell from 1970 onwards, foreign-born mothers picked up the slack. Indeed, she found that immigrant mothers are responsible for the entirety of the growth in annual U.S. births since 1970. Speaking on Thursday, Livingston noted that foreign-born women age 15 to 44 make up just 17 percent of the population, but have 23 percent of the children.

Immigration to America has in general been rising as fertility has fallen, but that doesn't necessarily mean that foreign-born women have been increasing in fertility; Livingston suggested that since the Great Recession, the opposite has been true. Either way, given that immigrants seem to be largely responsible for increases in fertility, reductions in immigration will likely have at least some impact on America’s overall birth rate.

Bradford Wilcox, a scholar the Institute for Family Studies, thinks there is another explanation: the recent, massive increase in screen time. Speaking on Thursday, Wilcox suggested that the amount of time that young Americans spend online or buried in their phones may be contributing to their choice not to interact in person, thereby delaying sex and marriage.

"The surge in smartphone ownership coincides with the marked, recent declines in sex among young adults and teenagers. The evidence is growing that the spread of highly entertaining and diverting technology discourages in-person socializing, including—we think—one of the most fundamental forms of socializing—sex." Wilcox and co-author Samuel Sturgeon wrote in Politico in February.

Regardless of the cause, one thing is clear: Americans are having fewer babies, a trend unlikely to abate any time soon. Such a demographic bust, Wilcox worries, could end up with America looking like Japan: elders uncared for and young people shut away from the world, unable to form lasting human relationships.