Why American Men Choose Not to Work

Probably since time immemorial, each generation has thought the next one lacked industriousness. But for the last half-century, this belief has been true of American men. Even as the economy has grown, a rising share of prime-age males have opted out of work.

Men Without Work: America’s Invisible Crisis, a brief book by Nicholas Eberstadt of the American Enterprise Institute, drives this point home forcefully, drawing on an impressive array of data to explain what’s happening and why.

The chart that forms the core of Eberstadt’s case depicts the percentage of men age 25-54 who do not have a job: 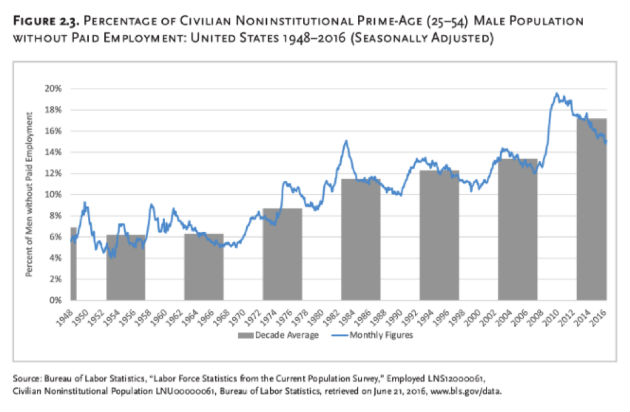 The ups and downs of the economy obviously matter; more men stop working during recessions. But for half a century, there’s been a trend of increasing joblessness, as is especially obvious from the bars depicting decade-long averages. This trend does not go away when Eberstadt adjusts the data to account for things like rising college enrollment and an aging population.

Men who aren’t even looking for jobs are driving a lot of the trend. To judge from various surveys, these men fill their days with mindless leisure, sometimes including drugs. They are actually less socially engaged than men with jobs, with lower rates of church attendance and volunteering. In fairness, non-working men do spend about 30 minutes more each day on housework than working men, which puts them roughly on par with employed women.

Why is this happening? Eberstadt offers a number of explanations, some more controversial than others.

One obvious factor is that the economy has changed in ways that make life harder for low-skilled men, the group that has experienced the most pronounced drop-off in employment. We can argue about how much to blame immigration, trade, or technology for the shift, but the bottom line is that the days of easily available, decent-paying factory jobs for men with little education are over. This isn’t a full explanation—for instance, low-skilled immigrants don’t seem to have trouble finding jobs—but it’s a big one.

Another factor may be the rise of mass incarceration, though as Eberstadt notes, any policy change in this area must be made with an eye toward preserving public safety. Only about one-half of one percent of the American population is imprisoned at any given time, but that’s still five times the rate of the 1960s. Additionally, most prison sentences are short, meaning that while the "stock" of prisoners is low relative to the size of the total population, the "flow" of prisoners is substantial. During the course of their lives, many men enter the system and then return to society with criminal records.

Eberstadt marshals a lot of data about this problem, which is a welcome surprise given that few surveys ask about Americans’ incarceration history. But the number I found most helpful was one the book inspired me to dig up myself. In 2012, the General Social Survey asked Americans a question often seen on job applications: "Not counting minor traffic offenses, have you ever been convicted of a crime?" Among men 25-54, one-fifth said they had. Drawing on other data, Eberstadt estimates that 13 percent of adult men have been convicted not just of any crime but of a felony. Criminal records are concentrated among African-Americans and those with less education.

How does this affect the labor market? Eberstadt provides unsurprising data showing that greater involvement with the justice system correlates with less work, both among individuals and at the state level. I wish he had also cited "matched pair" studies in which actors pose as job applicants with and without criminal records. Such studies show convincingly that employers discriminate severely against men with criminal records. As a group, men who break the law are probably destined to have below-average work histories whether they get caught and convicted or not, but a criminal record makes employment even less likely for these men, and there are a lot of them.

A third argument Eberstadt makes is sure to enrage the left—indeed, the book contains a response from liberal economist Jared Bernstein taking issue with it. Eberstadt argues that the social safety net is financing men’s decisions to stop working. While the 1996 welfare reform law did a lot to promote work among single mothers, there has also been a steady rise in men collecting disability, even as jobs have become less dangerous.

Just a few months ago, the president’s Council of Economic Advisers seemingly destroyed this talking point, noting that "from 1967 until 2014, the percentage of prime-age men receiving [Social Security Disability Insurance] rose from 1 percent to 3 percent, not nearly enough to explain the 7.5 percentage-point decline in the labor force participation rate over that period."

Eberstadt counters that other programs are available to the disabled as well—and that in the Survey of Income and Program Participation, 57 percent of men who were out of the labor force lived in homes reporting disability benefits. That number has increased 20 percentage points since 1985, and it is twice as high as the council’s figure. It may also be an underestimate, because people don’t always admit to using safety net programs in surveys.

Eberstadt doesn’t spend much time talking about solutions, keeping the book unnecessarily short at 206 pages, including two dissents, Eberstadt’s response to his critics, and endnotes. The solutions he does offer are great in theory but difficult in practice: more jobs and economic growth, safety net reform, and efforts to draw ex-prisoners into the workforce. It’s "only one person’s initial thoughts and suggestions," he writes. Indeed.

But that doesn’t undermine the value of Men Without Work. Eberstadt is right that this is "America’s invisible crisis": an enormous problem that is rarely discussed and will not go away on its own. Eberstadt has done more than anyone else to raise awareness of the issue and to sketch its contours.

Life in a Closeted Capital