Thousands of Americans living on the streets would be able to get into a home if aggressive housing regulations were rolled back, according to the White House.

A new report on homelessness, authored by the administration's Council of Economic Advisers (CEA), comes in advance of President Donald Trump's visit to California. The state is home to roughly 12 percent of the nation's population but nearly half of its homeless people. The CEA argues that major locales in the Golden State could see large reductions in homelessness if they deregulated their housing markets.

According to the CEA, about half a million people are homeless in America today, including roughly 200,000 who live on the street rather than in a shelter. Although this represents just a small share of the population overall, major cities in California and the Northeast, such as Boston, New York City, and Washington, D.C., are experiencing staggeringly high rates of homelessness.

"Between 2007 and 2018, the stock of permanent supportive housing (long-term housing with supportive services) and rapid rehousing (short-term rental subsidies) increased by just under 282,000 beds, a 149 percent increase," the report says.

That approach, which the report calls a "major shift" in federal homelessness policy, is a product of a "housing first" approach which calls for providing homeless people with supportive housing without condition. It costs taxpayers billions of dollars a year—but has it actually worked?

By some measures, the answer is yes. By official estimates, the homeless population has fallen by about 94,000 people since 2007. The CEA doubts that the federal government is responsible for that decline. The new paper argues that while permanent supportive housing necessarily reduces the number of homeless people in the short term, it may encourage homelessness in the long run. It can do so by increasing demand for, and therefore the price of, houses. It can also keep people in supportive housing for longer than they would have been homeless otherwise.

The report suggests recent declines in homelessness may have nothing to do with federal policy. The results may just be a result of "transitional housing being defined as ‘homeless' but similarly time-limited rapid rehousing not being defined as ‘homeless,'" combined with the "miscounting of unsheltered homeless people." The CEA looked more closely at factors that actually determine homelessness.

The new report considers a number of possible factors, including level of policing, "right to shelter" laws, and a collection of individual-level factors, including "severe mental illness, substance abuse problems, histories of incarceration, low incomes, and weak social connections." These all have predictable effects: More policing lowers homelessness, "right to shelter" laws increase it, and suffering from one or more socioeconomic or health problems also increases it.

The most interesting factor the CEA investigated was the role that aggressive regulation plays in homelessness. It cites multiple papers finding that a 1 percent increase in the median rent in a city leads to roughly a 1 percent increase in the homelessness rate. Aggressive regulations, such as restrictive zoning, rent controls, and green mandates, drive up rents, pricing people out of the housing market and into homelessness.

Using census data, the CEA simulated the effects of deregulation on homelessness across America. In general, it found that deregulation in the most regulated areas would cut homelessness by 13 percent nationwide. Major cities with stringent housing regulations would see the steepest drops. 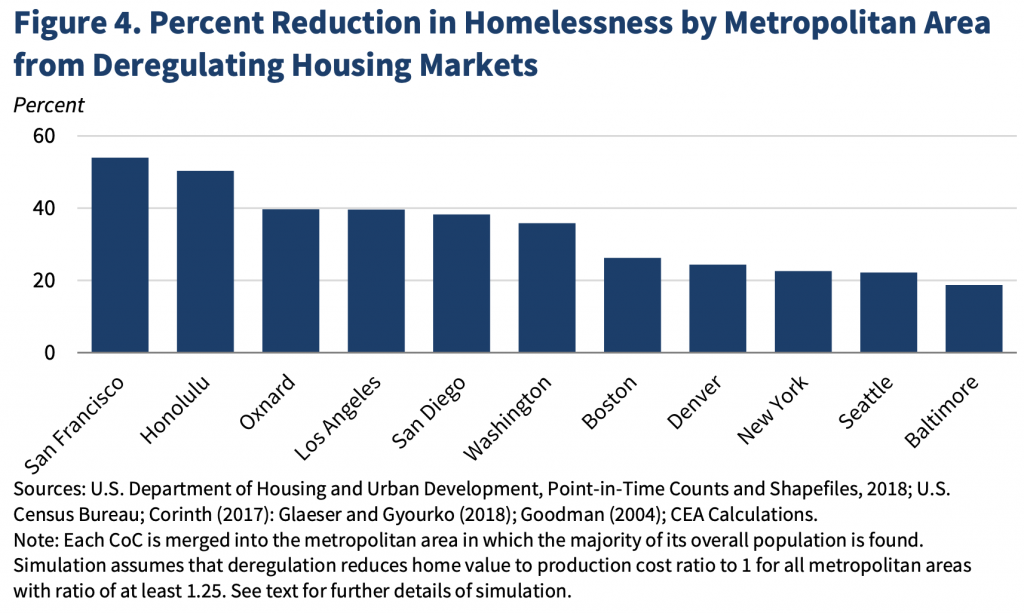 "We find that for the 11 metropolitan areas with housing regulations that drive home prices significantly above home production costs (which contain 42 percent of the United States homeless population), deregulation would reduce homelessness by an average of 31 percent," the report explains. "Homelessness would fall by 54 percent in San Francisco, 40 percent in Los Angeles, and 23 percent in New York City. Overall homelessness in the United States would fall by just under 72,000 people, or 13 percent."

If the CEA's estimates are accurate, this translates into major homelessness reductions, far outpacing the effects of the Obama-era "housing first" approach.

"To reverse the failed policies of the past, the Trump Administration is addressing the root causes of homelessness," the report says. "One of the major factors that increases homelessness is regulation that impedes home construction, which reduces the supply of homes and thus increases homelessness. While housing market regulations are largely set at the local level, the Trump Administration has recognized the importance of these regulations for the health of the economy and Americans' wellbeing, and taken action to address overly burdensome regulations."