A Democratic congressional candidate posted the home address of his Republican rival on Twitter hours after she expressed concerns that Antifa activists were protesting at her home.

Florida Democrat Adam Christensen published a screenshot of a Google Maps web page that listed the home address of Republican congressional candidate Kat Cammack on Sunday. He wrote the tweet in response to an earlier Cammack tweet that said activists were protesting at a driveway located on her private property. Christensen posted the image—which featured a bird's-eye view of Cammack's home—to argue that the activists were actually protesting on a public street.

While Twitter has deleted Christensen's tweet, according to the Cammack campaign, the Democrat has remained unapologetic on Twitter. When a Republican consultant reproached Christensen for the incident, the candidate responded, "You make me laugh, I really needed this today. THANK YOU."

This is not the first time Democrats have posted the personal information of Republicans online. Congressman Joaquin Castro (D., Texas) tweeted out a list of Trump donors in his district in August 2019, shaming them for "fueling a campaign of hate" against Hispanic Americans. And during the contentious confirmation hearings for then-Supreme Court nominee Brett Kavanaugh, two Democratic Senate aides illegally obtained the home addresses and phone numbers of Republican senators and posted them on Wikipedia.

"Our campaign thinks that this behavior is appalling and it is definitely way too far," she said. "Of course we understand that we are not going to agree on [issues] with the Florida Democrats or the national Democrats, but to have to be dealing with a candidate like this is not comfortable."

Christensen's campaign did not respond to a request for comment.

When Cammack uploaded a video of what she says are Antifa activists protesting on her property, Christensen first responded by uploading a 15-second video of him laughing. He soon tweeted that the protesters were actually members of a local homeowners association protesting on public property—allegations that Cammack's campaign denies. Christensen then tweeted out Cammack's home address in an attempt to bolster his claim that the protest took place on a public street. 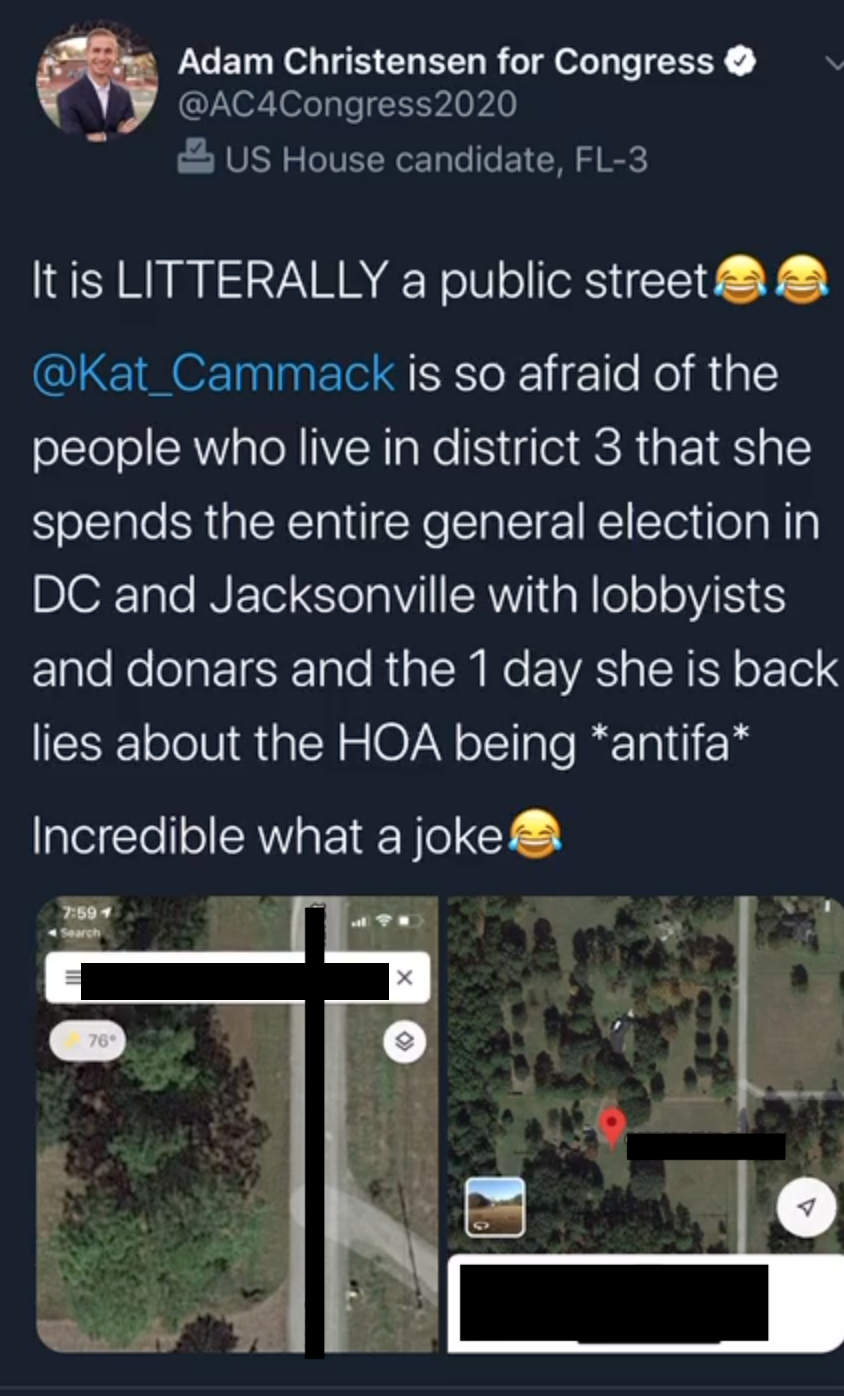 Hannah Jacobs, the communications director for Christensen's campaign, also posted Cammack's address. "Not saying you should do this but ANYONE *cough cough* can look up her or her husband … and find the truth about whether these peaceful protesters were on public or private property," Jacobs wrote in a now-deleted Sunday night tweet. 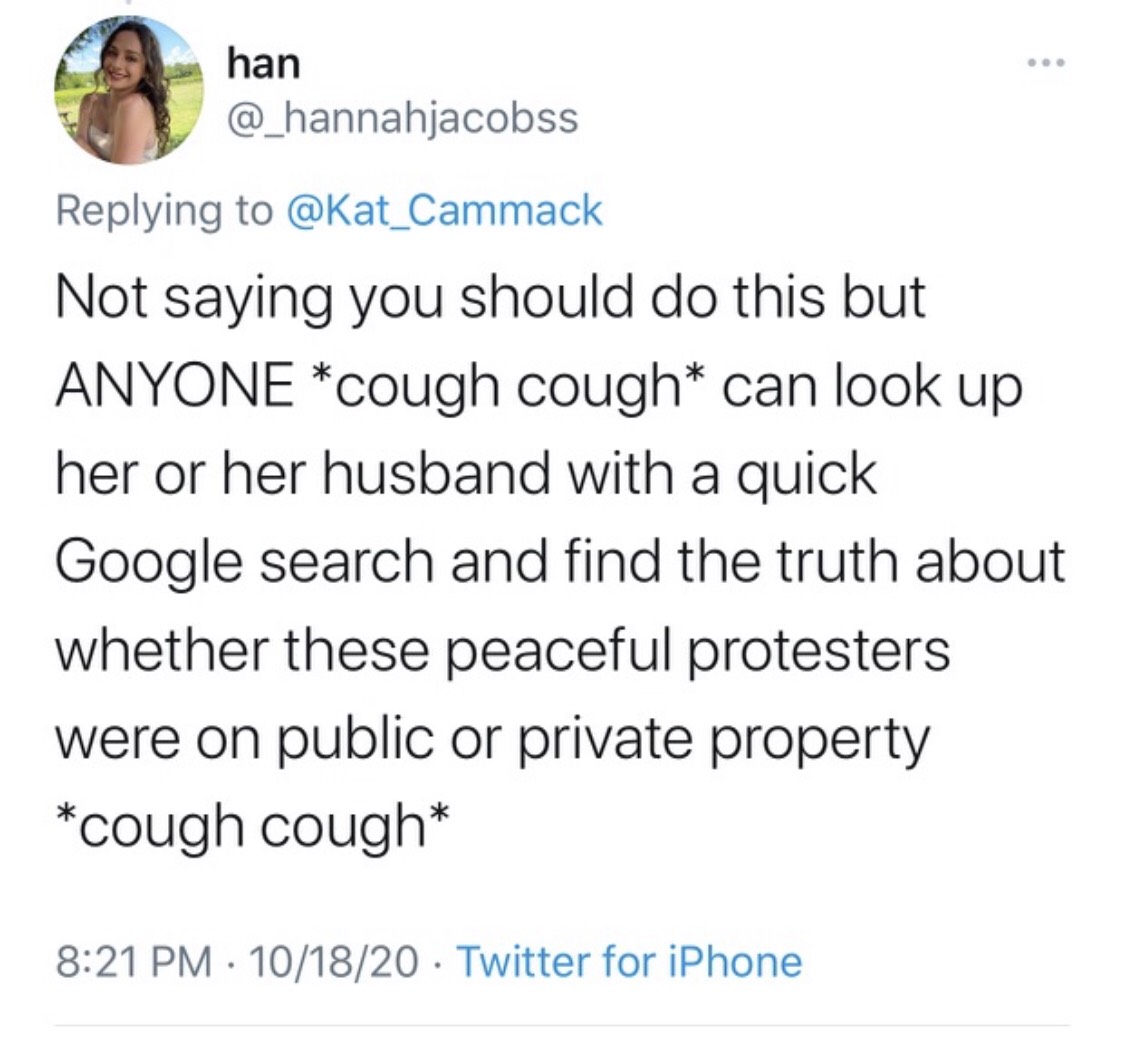 Christensen also went to bat against Kentucky senator Rand Paul (R.) when the legislator tweeted support for Cammack, saying that "Rand Paul knows what it's like to get his ass kicked by his neighbor." The senator broke six ribs and suffered injuries to his lungs when his neighbor brutally attacked him in 2017 over a dispute about lawn care.

"Literally amazing. Calling BS brings out the crazies. The entirety of Rand Paul's staff is being Karens," Christensen tweeted, adding three laugh emojis at the end.

‘We Have Rewritten the Political Map’: How the GOP Turned Florida Into a Red State