The Democratic Party is desperate to bolster its flagging support among Latino voters heading into the midterm elections. Finally accepting the fact that the word "Latinx" is weird and stupid—something white liberals do to feel better about themselves—is a good first start. Alas, the Democratic National Committee has chosen a rather unfortunate name for its new "signature outreach program" targeting Latino voters.

It's called "Adelante," which means forward or onward. As it so happens, slogans such as "¡Adelante!" or "¡La Revolución Seguirá Adelante!" were popular rallying cries under the communist regime of Cuban dictator Fidel Castro, or as he is known to some elected Democrats, "el comandante en jefe." The Cuban newspaper founded in 1959, the year Castro took power, is called Adelante, which boasts that it was "primero con la Revolución."

The DNC, which announced the program on Wednesday, has already rolled out some fancy graphic designs urging Latino voters to move "adelente con los Demócratas." They are pictured below alongside some of Castro's communist propaganda. 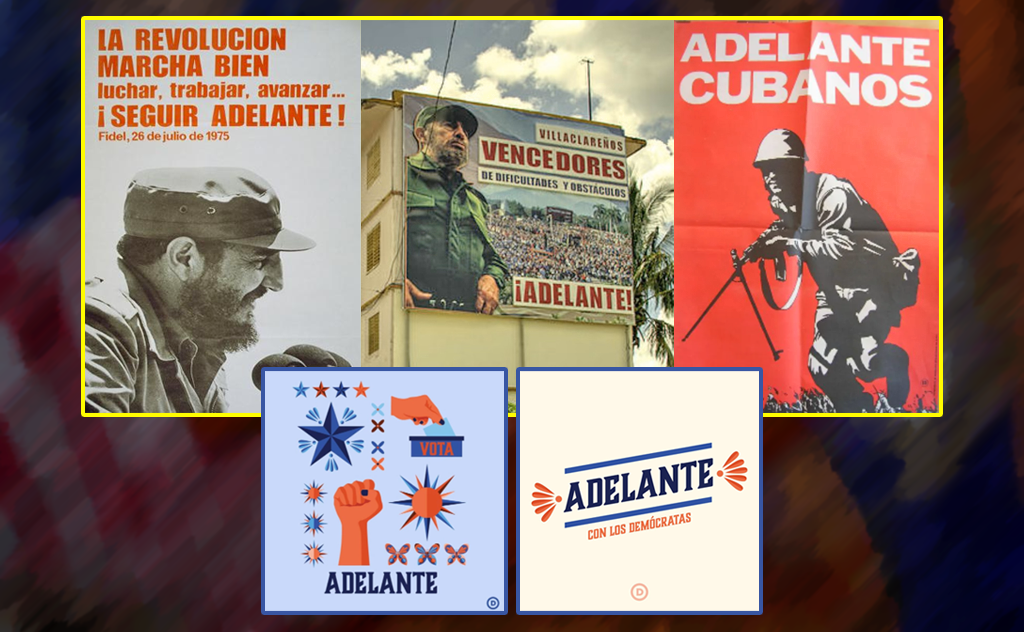 Many Democrats were appalled by the party's relatively poor showing among Latino voters in the 2020 election. Some argued that embracing "woke" terminology such as "Latinx," a word most Latinos do not use or even understand, made Democrats seem out of touch. Others, including House Speaker Nancy Pelosi (D., Calif.), faulted Democrats for alienating Hispanic voters with "loose talk of socialism," according to the authors of This Will Not Pass, a recently published book about the 2020 election and its aftermath.

Pelosi wasn't just spitballing. She had presumably seen survey data suggesting that a huge chunk of Latino voters—about 40 percent, according to the Democratic polling firm Equis Labs—were concerned about Democrats embracing socialism. There are plenty of ways Democrats could address these concerns. One would be to stop openly embracing socialism. Another might be—just throwing this out there—to not name your Latino outreach program after a communist dictator's propaganda slogan.