In what is sure to be one of the biggest self-owns of the 2022 midterm elections, Iowa Democratic congresswoman Cindy Axne is criticizing her opponent for taking money from a Chinese company—the same company Axne herself toured in 2019 and praised for "powering Iowa agriculture."

Axne on Tuesday released an ad titled "Weaken," which argues that the congresswoman's Republican opponent, Zach Nunn, is in China's pocket because he accepted a campaign contribution from a Chinese company. By Axne's logic, the Democrat herself is also compromised. Axne in November 2019 visited the company in question, Syngenta, to "discuss trade, USMCA biofuels, technology, and rural broadband with their team." Axne even praised Syngenta for "powering Iowa agriculture" and said she was "glad to hear from our neighbors" in a Facebook post touting the tour. 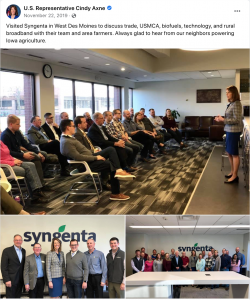 Axne's decision to attack a company she herself has praised will almost certainly blunt the anti-Nunn ad campaign's effectiveness. It also suggests Axne is feeling desperate as she fights for her political life in Iowa's Third Congressional District, which former president Donald Trump won narrowly in 2020. The sole Democrat in Iowa's congressional delegation, Axne is a top target for Republicans as they work to take back the House in November and has not won a race by more than 2 points in her career.

Axne's campaign did not return a request for comment. In addition to the ad, Axne on Tuesday released a statement arguing that Nunn's ties to Syngenta mark "another example of how Zach Nunn looks out for himself, even if it means leaving Iowans behind." The statement did not mention that just three years ago Axne embraced the company as her "neighbor" and credited it with energizing Iowa's top industry.

Beyond Axne's past relationship with Syngenta, the Democrat has her own financial skeletons in her closet. In September, a nonpartisan watchdog group filed an ethics complaint showing Axne sold "more than 40 assets with a total value ranging from approximately $43,043 to $645,000 … without disclosing the transaction," an apparent violation of the STOCK Act, which requires members of Congress to report large financial transactions within 30 days.

Just days after the complaint was filed, Axne spent thousands of dollars in taxpayer funds to hire liberal attorney Marc Elias. The Democrat went on to avoid punishment, though only because the House Committee on Ethics determined Axne was "generally unclear on the requirements" and did not knowingly omit the trades. Axne, who serves on the House Financial Services Committee, has also bought and sold tens of thousands of dollars' worth of stocks in financial services companies.

Nunn, a state senator and Air Force veteran, will face Axne in November after winning his primary contest by 47 points in June. He has raised $1.1 million to Axne's $4.9 million.