They Did It! They Finally Did It!

Feature: A lifelong Eagles fan experiences the joys of a Super Bowl win

"The defense just needs to make one play. Just one play."

That's what I kept saying as Tom Brady took the field for what deep down inside felt like another disappointment in the making. Another close Super Bowl loss. Another heartbreak.

If you're not from Philly, you'll never really understand it. My father felt the same way. He was born just a few months after the last Eagles championship in 1960, before the Super Bowl even existed. He's lived through 57 losing seasons and as the Patriots drove the field in the fourth quarter he could feel that sadness coming on again. The kind that you push down and pretend isn't there after each season ends. You pretend it doesn't bother you. You pretend you don't care. But everybody knows it still hurts because, dammit, you love this team. You love this city. You can't help it.

I mean, my Eagles anxiety is so deeply held that I still get knots in my stomach watching that fourth quarter even now. The drive where the Patriots took the lead. The 4th and 1 with 5:39 left that could've been the end were it not for that pass from Nick Foles to Zach Ertz called by Doug Pederson when no other coach on the planet would've gone for it. The strip sack. The failed Hail Mary. Each one is still hard for me to watch. I still tense up each time one of those plays starts.

That anxiety is so ingrained in me that it's a part of my physiology now. My body is simply going to need time to adjust. Time to figure out that we actually won the whole thing this time. To figure out that there's no letdown coming. No sadness. No heartbreak. Nothing to push down.

This time the defense made that one play. Brandom Graham bust through the interior of the Patriots' line and knocked the ball out of Tomy Brady's hands, and Derek Barnett pounced on it. Then the offense topped their incredible 41-point performance with a solid Jake Elliott kick. Then it was over.

Then my dad and I could finally celebrate.

One of the best parts of this win is the knowledge that younger Eagles fans won't have to grow up with that feeling. They won't know the heartbreak. The smallest ones, like my friends' 2-year-old daughter Briella (who was the lucky charm at our Super Bowl party), won't spend decades waiting for that Lombardi trophy to make its way down Broad Street. 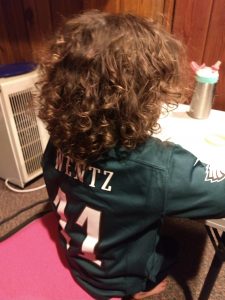 Briella and all the others who were just recently born into the Eagles fandom will know what it feels like to win it all.

It's the same feeling that was welling up inside of me as I raced down to Center City over icy roads and through a thick fog to join the spontaneous celebrations that had begun on Broad Street as soon as that clock went to double zeros. It's the greatest feeling in the world, and I was prepared to let it out.

The city was electric that night. Everyone was just happy. There was chanting and dancing. Fireworks going off in the street, just overhead. Live bands roamed up and down Broad on pavement usually designed for morning commuters and SEPTA buses. Strangers were hugging and taking pictures together.

In the middle of Broad, the city had parked two garbage trucks. Naturally, we all climbed on top of them.

My voice had long been gone but that didn't stop me from screaming. It was 30 degrees out but I wasn't cold.

Then there were the light poles. The city had decided to grease them to try and keep us from climbing them. Yeah, well, that didn't work. I made it up the pole at Broad and Pine. 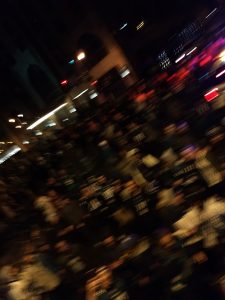 Climbing that light pole was a truly life-affirming experience. Strangers of all different races and creeds were helping each other get up and down that light pole safely. The crowd did any chant or song that the person on the pole started. Somebody decided to tell Philly fans they couldn't climb the light poles, but we did it anyway. It was beautiful.

Despite the stereotype of Eagles fans, there was little vandalism or destruction of property in Philadelphia that night. Only a handful of people were arrested. It seems there was more damage done in New England that night. That matches my own experience. While I was partying on Broad between 12:30 and 2:30 a.m., I didn't see a single act of violence or significant vandalism (other than some spray paint, those garbage trucks were fine). All I saw was happiness.

The same can be said of the parade on Thursday.

It was expected to be the largest event in Philadelphia history. It delivered on that, for sure. I've been to massive events before: Live 8 in 2005, Glenn Beck's 9-12 rally in 2009, Jon Stewart and Stephen Colbert's Rally to Restore Sanity and/or Fear in 2010. This felt bigger and better than all of them combined.

I had to be a part of this, and I wanted to be as close to the Art Museum steps as I possibly could be. So, I woke up at 4 a.m., had my dad drive me down to the closest Market Street line station, and preceded to walk the dozen or so blocks from 30th Street Station to the steps of the Art Museum.

Then the waiting began.

Crammed into a crowd full of black, white, Asian, Hispanic, Indian, and everything between Eagles fans I preceded to wait out the next five hours until the parade down Broad Street got to where I was. We passed the time with chants and songs and dancing. We got to know one another. The pretty medical professional from Cherry Hill. The nice dude from North Philly whose toes were freezing cold. The mom who brought the green Jello shots that helped warm us up just a little bit at 7:30 a.m. The guy who flew in from California to meet up with his pal who lives in North Carolina now (they both ended up next to your humble correspondent who now lives in Virginia).

I did end up in a brief shouting match with a dude after he drunkenly pushed his way through the crowd, but nobody, least of all me, wanted to see any fighting. We were all too happy for that. And even that dude and I ended up fist bumping after Jason Kelce's epic speech. A speech that I got to be a small part of as the camera panned to where I was standing during that last, incredible Eagles chant.

Everybody at the parade was a part of history but making it into the video of Jason Kelce's speech is something incredibly special to me. That moment is now immortal, and I got to be a part of it.

It made the eight hours I stood in the same spot on frozen mud in the blistering cold well worth it. Just as the Super Bowl win made the 30 years I spent rooting for the same losing team well worth it.

I've seen every single Eagles game in my entire life.

And, now, I've finally experienced the joy that comes with the Eagles winning it all.