The Schlock of the New

It is not novel to point out that most artists dislike Republicans and aren't shy about letting you know it. They hated Reagan so much they created an entire music genre, punk rock, to trash him. They hated W. so much they assassinated him on film—twice.

Still, this animosity is remarkable and kind of funny, especially in the age of Donald Trump—a figure so anathema, antagonistic, and culturally alien to the nation's creative class that he has inspired them to new heights of creativity and wokeness. He holds his fat red ties together with Scotch tape, for heaven's sake. For this and other crimes he racked up a mock assassination in the first 100 days of his presidency.

And that's not all. Below, recent highlights from the art world:

So the nation's artists are in the mood to resist, but are still poking around for the best way to do it. There are disputes over tactics. Some rallied behind the idea of an "art strike" to withhold art in protest as darkness rolled over the United States on January 20, Inauguration Day. At least one fellow has pledged to do the opposite, by sending art to Trump every day in an attempt to save funding for the National Endowment for the Arts. Some of the art has focused on positive things like America's founding ideals, including the freedom to walk the streets in a niqab while flashing some thigh. Much more has been nasty and dark, heavy on Nazi smears and vulgarities worthy of the commander-in-chief himself. 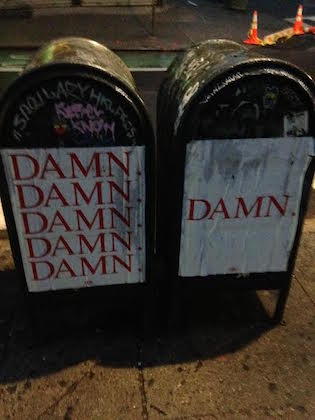 Take the street art I encountered in Manhattan the other day: Not the "F*ck Trump" graffiti one sees scrawled on every street corner of major metropolitan areas (I saw that, too), but a simple, repetitive "DAMN. DAMN. DAMN. DAMN. DAMN…" in bold red letters wheatpasted across the Lower East Side. Maybe these fearful, reflexive profanities didn't have anything to do with Trump. But I wouldn't bet on it so close to Brooklyn.*

Nearby, a collective of artists was opening a gallery, titled "The Red Hats" (think "brown shirts"), organized around Trump's signature headwear. "Our artists reinterpret this now-symbolic propaganda device," the collective said. The main installation was a wall of red hats with the words changed. Instead of "Make America Great Again," there were absurdist jokes and profanities: "Pussyhat," "Dumpster Baby," "Make America Fellate Again." On the opposite wall, rinky-dink drawings and paintings, plus a MAGA hat painted with an anthropomorphic cannabis plant that read "BAKE AMERICA." A few dozen attendees, looking like extras from the cast of Girls, milled around the gallery, looking at the art with half-interested, wry smiles and Snapchatting amusing entries. A disco ball cast a spinning, distorting grid of white light on the walls. It was all very strange and imperviously ironic, as though Chapo Trap House had decided to put on an art show.

The goal of shows like this is not to persuade, obviously. Talk of "civil engagement" and "nuance" and "start[ing] a conversation"—all words taken from the list above—is meaningless. Saying "Make America Fellate Again" is a way of ending a discussion, not beginning one. Shows like this are agitprop, meant to express the anger of the artist and fan the flames of anger among the converted. They are ostentatious ways for artists to prove they are members of a certain cultural tribe: the urban creatives. If only the urban creative were—what's the word—creative?

*After writing this, I was reliably informed that this is street art promoting the new Kendrick Lamar album, not a statement on the psychological anxiety of New Yorkers in the Age of Trump. Could've fooled me!