The Right writes better than the Left, in the aggregate. That is, if aggregation were something you could get writers to do. Generally speaking, you can’t. They’re not team players. Still, if you corralled enough conservative writers to put together a ballclub, it would be, say, the 1981 Dodgers: Solid, long-lasting infield. Sharp pitching. Good bench. Got the job done. But lacking the individual stars of the Yankees.

Or, in terms of the cars that P.J. O’Rourke always loved, conservative writers tend to be Buicks. They just keep running, they get grandma to the store, and they make little sad coughs deep in their envious carburetors when they see a Maserati peeling off the freeway at the exit for the New Yorker.

Maybe it’s just that writing for something like National Review makes you chaff, while writing for The Nation makes you wheat, when the star-making machine decides to grind, but there just haven’t been many acknowledged pure writers on the conservative side—writers’ writers, in that godawful phrase—over the past 50 years. Andrew Ferguson, of course. Christopher Hitchens, once he made his early 2000s turn to supposed warmonger. (Raiding the Left for writers who’ve been mugged by reality has always helped provide new blood, if only because conservative editors know that it’s the Left’s job to make stars of young writers. It’s the Right’s job to steal them when they grow up. See, ad passim, Saul Bellow.)

And then there was P.J. O’Rourke, who died this week at age 74. He was, in Rob Long’s words, sneaky smart, which is another way of saying he wouldn’t accept the peculiarly flimsy premises of political correctness. But mostly he was funny. Born in 1947 to an Ohio car-dealing family (from Irish ancestors who probably learned their high-fueled trade from dealing horses and untaxed poteen), P.J. came of age in the hippiedom of the late 1960s, for his sins. Present at the creation of the New Journalism, he learned Gonzo reporting from Hunter S. Thompson, fast-moving prose from Tom Wolfe, and first-person madness from… well, no, probably not Joan Didion. Let’s just say that to read P.J. O’Rourke’s 1979 National Lampoon essay "How to Drive Fast on Drugs While Getting Your Wing-Wang Squeezed and Not Spill Your Drink" is to see that the 1970s were just as freaky as you've always suspected. Madness was in the air, and the people who actually inhaled tended to bogart their atmospheric intoxicants.

Most of them eventually drifted off, deciding with what was left of their minds to believe the college leftism they had originally espoused because—in P.J.’s later reminiscing in his 1995 book, Age and Guile Beat Youth, Innocence, and a Bad Haircut—that’s where the easy drugs and easy girls tended to be found.

But P.J. went the other way, taking the road less traveled. Most times, that leads you off the cliff at 70 miles an hour, landing in the rainwater pond in the abandoned quarry at the end of County Highway 12, which none of the yokels told you about because what kind of damn fool would take that road?

In P.J.’s case, however, his whiskey-soaked conservatism, with a splash of libertarian soda, landed him gigs at National Lampoon, the foreign-affairs desk at Rolling Stone, a stint of comic movie-script writing, a steady stream of Gonzo columns for Car and Driver, a pair of #1 bestsellers (Parliament of Whores and Give War a Chance), and two decades of slumming as a contributing editor among us at the Weekly Standard. "There are thousands of people in America who feel this way," he wrote about conservatism in 1986, "especially after three or four drinks. If all of us would unite and work together, we could give this country… well, a real bad hangover."

It’s easy enough to make a chrestomathy of P.J. O’Rourke lines. (Chrestomathy is a high-falutin word for anthology or compilation. Every writer knows it because H.L. Mencken, whom every public writer secretly wants to be, found it in a dictionary back in 1948 and decided, What the Hell, why not use it?) Take, for some examples:

If you are young and you drink a great deal it will spoil your health, slow your mind, make you fat—in other words, turn you into an adult.

The 1960s was an era of big thoughts. And yet, amazingly, each of these thoughts could fit on a T-shirt.

Being a humorist is not a voluntary thing. You can tell this because in a situation where saying a funny thing will cause a lot of trouble, a humorist will still say the funny thing.

Among his car writings, you find such paragraphs as "Cars didn’t shape our existence; cars let us escape with our lives. We’re way the heck out here in Valley Bottom Heights and Trout Antler Estates because we were at war with the cities." And then, he adds, "We fought rotten public schools, idiot municipal bureaucracies, corrupt political machines, rampant criminality and the pointy-headed busybodies. Cars gave us our dragoons and hussars, lent us speed and mobility, let us scout the terrain and probe the enemy’s lines. And thanks to our cars, when we lost the cities we weren’t forced to surrender, we were able to retreat."

A typical P.J. O’Rourke passage starts with a comic, sometimes shaggy-dog set-up. It often shows a little wanderlust, tracing a few steps out the paths of its extravagant metaphors, which worked for him (if not for other writers) because he wrote such fast-moving prose. But the passage usually returns to snap closed with a zinger, hence the many entries we could put in An O’Rourke Chrestomathy. Except, often enough, that wasn’t actually the end of the paragraph. The prose would tumble on a sentence or a clause past the quotable bit. P.J. O’Rourke was always pulling us on as readers, zipping past the zingers into the set-up for the next bit.

To be with P.J., which was usually to drink with P.J., was to think that maybe, contrary to the lived experience of most of us, being a writer wasn’t such a bad thing. He watched me read a poem once, but even after the after-poem drinks, I couldn’t get him to do much more than smile. And sip. You didn’t want to speak to P.J. O’Rourke. You wanted to listen. And laugh. He was just so good, so competent, at the writing life.

Most writers, in the choice phrasing of previous generations, could screw up a two-car funeral. Strong were our sires, and as they fought they writ, said the poet Dryden, conquering by force of arms and dint of wit—thereby proving he didn’t have much clue about what writing would become by the time the late 20th century got ahold of it. We conquered little, and mostly we dented wit. Still, good, solid earthy death metaphors were a standard of previous generations, till, somewhere in the late 1990s, it got you reported to Human Resources instead. You know the place: home to a recent Goucher College graduate named Mercedes who orders you to undergo sensitivity training where, in the spirit of the dead Chairman Mao, you learn not to use the dead for metaphors and thereby insult those colleagues who are, as you suspected, zombies raised from local graves by the accounting department.

But P.J. O’Rourke could make anything run with the full-throated sound of a 1964 Pontiac GTO. He ends one essay: "Just a little more courage, just a little more strength of character, you could have been dead by now. No such luck." And I wanted to make a final joke about his dying, thinking that’s what he would have liked.

But thought of that late death has taken all my heart for laughter.

Joseph Bottum is director of the Classics Institute at Dakota State University. His most recent book is The Decline of the Novel. 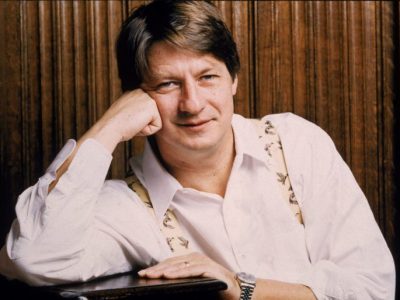