P.J. O'Rourke, who died Tuesday at the age of 74, will be remembered for his legendary career, his many books, his generosity, and his oversized presence in the Penguin Dictionary of Modern Humorous Quotations. Deservedly so.

P.J. was not just an exemplary journalist. He was a gentleman. Over the past few days, I've brooded over some memories of his fine character. In the spring of 2005, for example, P.J. made one of his occasional visits to the Weekly Standard. Our cover story that week was senior writer Matt Labash‘s account of a recent trip to Canada. "Welcome to Canada," the cover line read, "The Great White Waste of Time."

The article was not exactly favorable. Speaking for his fellow Americans, Labash wrote, "If we have bothered forming opinions at all about Canadians, they've tended toward easy-pickings: that they are a docile, Zamboni-driving people who subsist on seal casserole and Molson." (You can find the rest of this fantastic essay in Labash's collection, Fly Fishing with Darth Vader.)

P.J. loved that story. The first thing he wanted to do when he arrived on the fifth floor of 1150 17th Street was to tell Labash how much he envied the takedown. Amazingly, Labash wasn't in the office that day. So P.J. left a note for him instead. I forget the exact wording. It went something like: "Matt, you bastard, you wrote the piece I wanted to write!" When Labash found the message, he couldn't have been happier.

We all knew why. There was no higher praise than P.J. O'Rourke congratulating you for a job well done. Writers of both Labash's generation and mine had grown up on P.J.'s journalism for National Lampoon, Rolling Stone, Car and Driver, the American Spectator, and the Atlantic. Each of us had a stack of his books. We recognized that P.J. was the measure of excellence. What we didn't anticipate was that someone so talented could also be so friendly and kind.

P.J. was a humorist who took his work seriously. I'm reminded of his craftsmanship when I recall the evening in May 2015 when the American Enterprise Institute held a book forum for The Dadly Virtues, a collection of essays about fatherhood edited by Jonathan V. Last. P.J. contributed to the project and traveled to D.C. to appear on the AEI panel.

Before the event began, I mentioned to P.J. how much I'd been enjoying his writings about space exploration. I told him that he really ought to make the final frontier the subject of his next book. It would be All the Trouble in the World, except it would take place out of this world. Instead of Somalia, the Amazon, and Haiti, he could write about the Jet Propulsion Laboratory, Blue Origin, and Mars simulators. I felt like a Hollywood producer pitching a marquee star on his next big project. And I flopped.

P.J. just smiled. Here's the problem with that idea, he said. It's too big. The reporting would be too demanding. Maybe he could make it work if he were 20 years younger. But times change, life goes on, interests wax and wane. P.J.'s future work focused more on politics and business than on science and travel.

I left that exchange thinking about the concentration and energy P.J. must have put into his classic dispatches from the Philippines, Lebanon, Nicaragua, and Saudi Arabia. Turning his 72 hours in Afghanistan and his journey on the USS Roosevelt aircraft carrier into clear, insightful, and funny prose for the Weekly Standard required immense effort even if P.J. made it look easy. Finding the right word mattered to him. Reporting was no joke.

These are important lessons. Whenever a young writer shows promise, I hand him a copy of P.J.'s Republican Party Reptile and tell him to skip to the chapter titled "Ship of Fools." It's drawn from the essay P.J. wrote in 1982 for editor Michael Kinsley, then at Harper's, who told the refugee from National Lampoon to hop aboard a Nation magazine cruise in the Soviet Union and write about it. Anyone who hopes to wield a pen ought to study, analyze, dissect, and above all appreciate this piece. I tell aspiring reporters to forget the jokes. What they need to focus on is the story choices and scene construction.

"Ship of Fools" is a textbook case of P.J.'s devotion to language and dedication to reporting. He lets the absurdity of his surroundings emerge naturally from deadpan prose laced with wisecracks and sideways glances. His descriptions are plain, uncluttered, and exact. His dialogue is authentic. His subjects reveal their common sense and quick-wittedness, or their stupidity and dullness, through their own words and actions. He's a master of first-person perspective who never gets in his own way. His pacing is flawless. He shows that the greatest laughs come from the simplest words.

Beneath P.J.'s charm was a substantive core that deserves special appreciation and tribute. The flip side of his belief in individual freedom was his embrace of personal responsibility. These twin values stemmed from his faith in God. Many years ago, during his first cancer diagnosis, P.J. wrote, "God created the world. Obviously pain had to be included in God's plan. Otherwise we'd never learn that our actions have consequences. Our cave-person ancestors, finding fire warm, would conclude that curling up to sleep in the middle of the flames would be even warmer."

Toward the end of this poignant essay, P.J. wrote, "Death is so important that God visited death upon his own son, thereby helping us learn right from wrong well enough that we may escape death forever and live eternally in God's grace. (Although this option is not usually open to reporters.)"

Some reporters, maybe. The great P.J. O'Rourke has nothing to worry about. 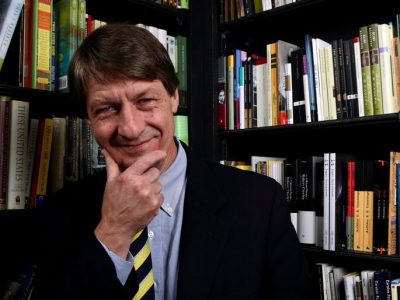