NBC News tweeted out a misleading video on Monday of actor and vocal Trump critic Alec Baldwin telling a group of  Democrats they need to "overthrow the government" under President Donald Trump.

"We need to overthrow the government of the United States under Donald Trump," Baldwin said at a Democratic event in New Hampshire on Sunday.

NBC News tweeted out a video with the quote but left out important context. Before he encouraged the audience to "overthrow" the government, Baldwin stated the way to do it was in a "orderly," "formal" and "lawful" way.

Alec Baldwin: "We need to overthrow the government of the United States under Donald Trump." pic.twitter.com/J332cZA7rf

Later in his remarks, Baldwin criticized Trump and Republicans in Congress.

"There is a small cadre of people currently in power who are hell-bent on continuing a malicious immigration policy that has set this country up for charges of human rights violations by the global community," Baldwin said. "This cadre has looted money from the federal treasury and deposited it directly into the bank accounts of their most ardent political supporters, so that they and several generations of their descendants will have the resources to maintain the GOP in political power for as long as possible."

Baldwin has hinted at a possible foray into politics and teased back in June that he could beat Trump if he ran for president.

He continued his attacks on Trump and the GOP for their treatment of women.

"They view and treat women as human beings that are not entitled to the same constitutional protections that men are. They are sons, they themselves are sons, husbands, fathers, and yet when the time arrived in the thick of the #MeToo movement to set politics aside and establish that women's rights were more important than political expediency, they failed and it was ugly," Baldwin said.

Baldwin was a supporter of Hillary Clinton in 2016 and has a friendship with her husband, former President Bill Clinton, who has faced his own problems with the #MeToo movement. 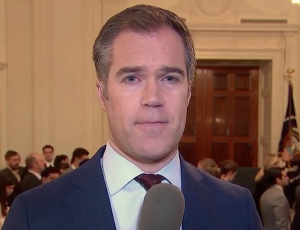