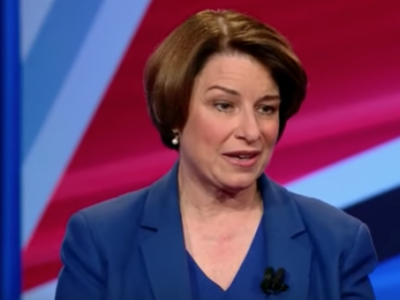 Klobuchar Orders Town Hall Audience: 'It's When You Guys Are Supposed to Cheer'

Bush, who served as Florida's governor from 1999 to 2007, and his team of investors won the auction to purchase the club, according to a Bloomberg report. He was not the only major Republican involved in the bidding process. Tagg Romney, son of the 2012 presidential nominee Mitt Romney, was also in the running to purchase the team.

Bush is attempting to follow in the footsteps of his eldest brother, former President George W. Bush. The elder Bush led a consortium to purchase the Texas Rangers in 1989 for $89 million. He proved an adept co-owner, helping to revitalize the franchise. After going 70-91 in 1988 with 1.58 million attendees in 1988, Bush and his team helped lead them to an 83-79 record in 1989 with attendance surpassing 2 million for the first time in franchise history. Bush left the team after defeating incumbent Gov. Ann Richards in 1994. He and his partners sold the team in 1998 for $250 million. The team had only one losing season—excluding strike-shortened 1994—during Bush's tenure as managing general partner. The club posted a record of 707-685 from 1989 to 1998.

The Marlins are a franchise also in search of a turn-around. The club has not had a winning season since 2009 and homegrown superstar pitcher Jose Fernandez died in a boating accident in September. The team has only surpassed the 2 million attendance mark three times in its history—2012 when it opened a brand new ballpark with considerable taxpayer investments, its 1997 World Series winner, and the clubs debut season in 1993.

Team owner Jeffrey Loria reportedly sought $1.6 billion for the team he purchased for $158 million in 2002. Bush and his team reportedly settled on a $1.3 billion package. The purchase must first be approved by the other team owners, who are scheduled to meet in May.

Klobuchar Orders Town Hall Audience: 'It's When You Guys Are Supposed to Cheer'