Hinson, who was elected in November, said she is "appalled" that lawmakers receive unsolicited copies of China Daily, a Chinese state-controlled newspaper that has been designated as Communist propaganda by the State Department. China Daily has been delivered to congressional offices each morning for many years despite outrage among some members who view its circulation as inappropriate.

"Frankly, I was appalled when I walked into work Friday morning and saw my office had received an unsolicited copy of China Daily," Hinson, a former television news reporter, told the Free Beacon. "How can we expect the American people to trust that Congress will take on the Chinese Communist Party when its dangerous propaganda is being delivered right to our doorstep? I wrote to the speaker immediately and asked her to address this issue."

The letter demands Pelosi use her power as the chamber’s leader to "stop the CCP from distributing its state-run publication within our hallowed halls. This offensive garbage should not be automatically distributed to Congressional offices at the cost of the American taxpayers."

China Daily is among the Communist regime’s most well-known propaganda organs. The Free Beacon reported in December that China Daily breached federal laws by not disclosing the amount of money it spent to publish its propaganda in prominent American media outlets such as the New York Times and Washington Post. The report prompted calls for a congressional investigation into how and why China Daily makes its way in to Congress each day.

Hinson says Pelosi can use her authority as the House’s top official to stop the automatic distribution of the paper to congressional offices.

China Daily is barred from accessing congressional press galleries due to its designation as a foreign agent under U.S. laws. "Yet, their mal-intended work appears on my doorstep, alongside the newspapers of the American free press. This is a flagrant violation of the taxpayers’ trust," Hinson wrote in her letter.

In addition to publishing its own newspaper under the China Daily masthead, the publication has purchased prime advertising real-estate in America’s top newspapers. The New York Times, for instance, deleted hundreds of Communist Party advertorials from its website last year, including those from China Daily, as part of an effort to expunge foreign propaganda from its pages. The advertorials are written by advertisers but often appear to be part of the paper's news pages.

The advertorials brought in millions of dollars in revenue for the newspapers but raised questions about the American media’s often undisclosed relationship with the Communist Party’s official mouthpieces.

China Daily was one of the first Communist Party-controlled papers forced to disclose its work under the Foreign Agents Registration Act, which mandates foreign governments disclose their work in the United States. GOP lawmakers pressured the Department of Justice to investigate the paper, alleging it breached federal law for years by disseminating propaganda across the United States. 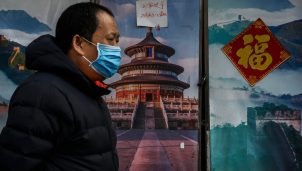 Chinese Propagandists Used ‘Wuhan Virus’ Before Condemning It as Racist