Huma Abedin, the longtime Hillary Clinton "aide" and estranged spouse of Anthony Weiner, is modeling expensive clothes on the internet, the Washington Free Beacon has learned.

Perhaps in an homage to her boss (and long-rumored lover) of more than two decades, Abedin donned a variation of Hillary's signature pant suit for Argent, a feminist fashion brand for woke professionals. In one photo, the model is posed next to what appears to be an old person's walker—just like the one Hillary used to support herself during a now-infamous photo shoot for People magazine in 2015. 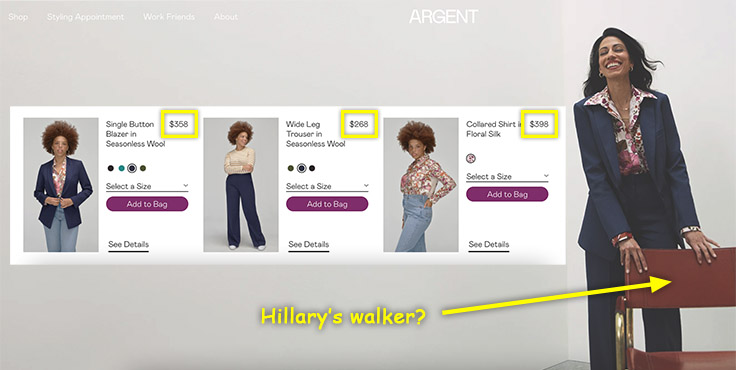 A mathematical analysis determined that the cost of Abedin's "lewk"—comprised of a single button blazer, floral collared shirt, and wide leg trouser—is approximately $1,024 (excluding tax). The model is euphemistically described as Hillary's longtime "professional confidante," but descriptions do not mention the central role she played in her former employer's sordid email scandal.

Several days before Hillary's embarrassing defeat in the 2016 presidential election, former FBI director James Comey was forced to inform the public that federal agents had uncovered some of the candidate's emails on a laptop belonging to Abedin's husband, disgraced amateur photographer and social media user Anthony Weiner, aka "Carlos Danger." The FBI was investigating Weiner for allegedly sending sexually explicit messages to a 15-year-old girl, a bombshell story first reported by the Free Beacon's Alana Goodman.

Since then, Abedin has maintained a low public profile. She formally separated from Weiner in 2017 after the sex pest pleaded guilty to a federal obscenity charge, but has continued to serve as Hillary's chief of staff. Earlier this year, Abedin announced a (presumably lucrative) deal to write a memoir that will include a "candid and moving reckoning" of her marriage (to Weiner).

Both/And: A Life in Many Worlds is due out Nov. 2. The book will also reportedly offer a "deeply personal account of Clinton as mentor, confidante, and role model" that promises to "reveal a crystal clear portrait of Clinton as a brilliant and caring leader, a steadfast friend, generous, funny, hardworking, and dedicated." It is unclear if the author will discuss her ties to Islamic extremists.

"I've long known Huma to be a compassionate and committed adviser and public servant. I've relied on her talents, wisdom, and counsel for a quarter-century," Hillary wrote in praise of the forthcoming memoir. "Both/And is the beautifully written account of a grand journey, and I'm so delighted she's chosen to share her story of grit and grace with the world."