Each year 60,000 members of the gun industry gather in the Nevada desert to show off their latest and greatest in hopes of impressing media while selling stock to gun dealers across the world. The highlight of this event is, by far, industry day at the range. It's a full day of shooting every gun imaginable from every gun company imaginable—a gun enthusiast's paradise.

Last year, I challenged myself to shoot as many guns as physically possible. From sun up to sun down. It was an exhilarating experience but the human body wasn't designed to shoot 100 guns in 8 hours.

I ended range day last year exhausted, a bit delirious, and with a headache.

This approach made for a more relaxing and cathartic experience—at least as relaxing as shooting a bunch of machine guns and high-powered rifles can be. No headache this time either thanks to my favorite hearing protection, the Shotgunners, from the kind folks at the Peltor booth. 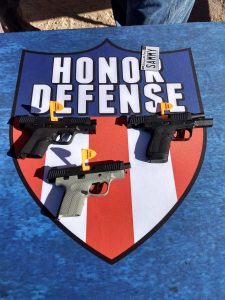 I still managed to shoot plenty of guns. The industry trends were very apparent after a while: Everybody seems to be making their own .380 mini-1911s now, which I don't mind a bit. The 9mm subcompact carry gun is as popular as ever, which I love since that's what I prefer to carry (currently I carry an XDS). The Walther PPS M2 and the Honor Defense HG9SC really caught my eye as legitimate alternatives to the already fantastic Glock 43, Smith and Wesson M&P Shield M2.0, and Springfield XDS. Sadly, I wasn't able to get my hands on the extremely intriguing Sig Sauer P365.

I was suffering from the onset of a nasty cold, though. My sinuses were stuffed up pretty bad. However, the incredible concussion from the Fightlite Raider cleared that up better than any neti pot could. Shooting that Frankensteined concoction made me feel like a space pirate with some sort of futuristic blunderbuss.

CMMG didn't have their iconic full-auto AR/AK rifle, THE MUTANT, up and running this year, which left me quite sad but, luckily, they had a delightful replacement—a full-auto, short-barrel .22lr AR. It's hard to explain just how pleasant a full-auto 22 rifle is to shoot. It produces something akin to a swarm of bees. It captures the joy of that classic carnival game where you try to shoot out the red star on a piece of paper with a full-auto pellet gun that looks like a Thompson submachine gun.

So much fun and wonder have been derived from that air gun over the decades, the joy of many adolescent boys' summer adventures, but CMMG's full-auto 22 manages to top even that—it's a bit like going from your first Tonka truck as a kid to your first F-150 as an adult.

Of course, as a civilian, federal law makes it impossible to own that particular brand new full-auto.

The same thing goes for my personal favorite gun at the show: the Battle Arms Development Paratrooper (though you can pick up its semi-automatic cousin for $3,050 if you want). It's a beautiful throwback. A modern-day Tommy Gun. A masterpiece of metal.

I've long admired the Paratrooper with its handcrafted wooden accents, specially designed compact buttstock, 7.5-inch barrel, and Olive Drab Green finish. It's a true work of art. But in the years I've taken pictures of it and handled it on the showroom floor, I've never been able to fire it.

The wait was well worth it.

Battle Arms Development is a company after my own heart. They specialize in heavily customized ARs with short barrels and innovative Cerakote jobs. If I was cast in a reboot of The Sound of Music, these would be my favorite things.

The Paratrooper is Battle Arms Development's crowning achievement. All their best work rolled into one. A true tour de force of steel and gunpowder.

I also took some time out to enjoy the non-gun offerings this year. It turns out they're even more fun than I expected. I popped a balloon down range on my first shot with the Mission Crossbow Sub-1. It turns out I'm pretty good at throwing knives too! Who knew? And my desire to plug in my phone charger led to an extremely enjoyable bit of wheeling in a 2017 Dodge Ram Power Wagon, which is remarkably capable of both climbing mountains and charging my phone.

Of course, it wasn't all a fun time. The slaughter inflicted on Las Vegas that left 58 dead was brought into deep personal relief when our bus to the range drove right past the Las Vegas Festival Grounds and the Mandalay Bay Resort. On the ground, it's not hard to see how the murderer was able to inflict such carnage on the concertgoers. It's much harder to imagine the terror of those concertgoers as they were ambushed by a monster or the crushing pain felt by victims' loved ones.

While Shot Show is mainly about commerce in firearms, politics is never too far behind. One top gun-rights activist I spoke with gave some insight into the bills currently moving through Congress. While it had been hoped that there might be some movement on national reciprocity or silencer reform in the Senate by the end of February, the recent government shutdown and political opposition make that unlikely. Instead, the hope is now that votes could come by April or May. But they're prepared for even more pushback given how things have gone thus far.

Even when a vote does come, it's a long shot that either bill could get to the 60 vote threshold. With Democrats only being able to give up 7 or 8 votes for these bills and the number of vulnerable Democrats up for reelection this year, it will be captivating to see who exactly is forced to vote against pro-gun legislation.

Interestingly, national reciprocity may have more support in the Senate than silencer reform. With even supposedly pro-gun politicians messing up the difference between silencers and suppressors (there is no difference beyond the name) and claiming they make a gunshot completely inaudible (they most certainly do not), it seems ignorance and confusion are the biggest reasons for the gulf between support for the two bills. It will be fascinating to see how that all plays out over the next few months.