Feature: What I Saw at the Climate March

It's already summer in Washington. You can tell because it's 90 or so degrees and humid enough for Jurassic Park. The dress code here is impatient. Young men chinoed in every conceivable shade—pink, yellow, maroon, cream—patrol the streets. Seersuckered bros strut up and down Constitution Avenue like animate candy canes, giving off strong hints of generational wealth and grade inflation.

Except this year it isn't really summer. It's Protest Season. Last week they came in the rain, from the Scientific Research Society, the National Science Teachers Association, the Earth Day Network, the Wilburforce Foundation, the National Association of Entomologists, the University of Montana, the Hip-Hop Caucus—"a large number," according to the official website, "of dynamic and impactful organizations"—to protest on behalf of Science. On Saturday they came again in the blazing heat, from the Virginia suburbs, from Washington State, from both Portlands, from Canada and Hollywood, grandpas and grandmas and teenagers and middle-aged people and five-year-olds, to protest in favor of "Reality."

"Whose ‘Reality'?" one asks these days. I have no opinion about "climate change" myself. If scientists say the "earth," whatever that means, is getting warmer, I daresay they're right. If I don't know what a statement signifies in positive form, I can't very well affirm its negation. Should we try to make things cooler again? Sure. I hate warm weather. How do we do it? I have no idea. Would limiting the production of iPhones and other specimens of planned obsolescence and buying nice second-hand clothes instead of trash made by Southeast Asian slaves help? Fine by me. I'm no expert. What I can say for certain is that the thousands of pro-reality enthusiasts who lined up to march from Capitol Hill to the White House and back down to the Washington Monument on Saturday know as little about this subject as I do.

Getting into Washington was difficult on Saturday, and leaving was well nigh impossible. The metro was almost totally shut down. There were no trains at Metro Center, the most convenient stop for leaving the proceedings in the afternoon. I had to take cabs, one of which cost me $50. By 11:00 a.m. there were supposed to be tens of thousands of us. Most of the people I talked to were on the lookout for Leo.

"Do you know where Leo is supposed to be?" a young woman asked me outside the Capitol.

"Which Leo?" I said. "The Thirteenth? I haven't ordered his portrait yet, but you can get a nice one on AllPosters.com."

"Of him in The Great Gatsby?"

"No, of him enthroned with alda, stole, mantum, and tiara. The whole works."

All day the signs were an interesting grab bag: "CLIMATE, JOBS, JUSTICE"; "WE CAN'T DRINK OIL"; "REDUCE, REUSE, RECYCLE, RESIST"; "HONOR THE TREATIE [sic]"; "Don't destroy the earth. I buy my tacos here." One pair of old ladies in pink t-shirts had written the words "PROTESTING FOR" above pasted-on photos of their beautiful grandchildren. I told them my daughters were in Michigan this week visiting their grandmothers and that I wished I could have brought them with me. A massive yellow wooden structure that I found later in the afternoon just north of the National Mall was labeled "TROJAN OIL DRUM: CLIMATE ACTIVISTS INSIDE." In front of it was a red pen and invitation to sign with my name or a message, which I did in my jagged block printing. 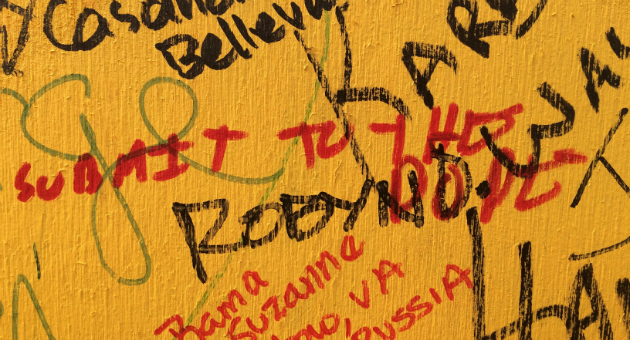 The march itself was slow and hot, record-breakingly so. No one seemed to like the fact that I was smoking, not even when I offered to share an interesting bit of scientific research I had found showing that despite very high rates of smoking, incidence of lung cancer in Japan is almost statistically insignificant. A very large man with a guitar brandished his instrument at me threateningly between exaggerated faux-coughs. I moved off the parade route, following along best I could on the sidewalk. By the time we got to the White House, there was still no sign of Leo. But there were plenty of lions. You should have heard us roaring.

"RESISTANCE IS HERE TO STAY! WELCOME TO YOUR HUNDREDTH DAY!" we shouted, our voices swollen with leonine confidence. We had the place surrounded.

By 3:00 it was time to regroup at the Mall to "share stories," as the organizers put it, before we all decamped. But I couldn't stick around. I needed to get my laptop out of the heat and find a charger for my dead phone. I also needed a beer and a safe space where I could enjoy organic plant matter harvested and stored according to traditional Cherokee methods without fear of reprisal, violent or otherwise. The most convenient thing about covering protests is the fact that the best bar in D.C. is only a few blocks from the place where most protests either begin or end. The Saturday afternoon staff knows me pretty well by now. Realizing I couldn't leave for a while unless I wanted to walk home, I planned on sticking around. Imagine my surprise when I discovered the bar was closing at 4:30 for a private event. Could Leo have booked the place?

At around 4:15 I got my check and went across the street to see about a cab. I couldn't help eavesdropping on two women walking up from the Mall.

"I grew up here because my dad worked for Clinton," one of them said, before pointing in the direction of the bar I'd just left. "I think I've been to that tavern before. It's called, like, ‘America's Tavern.'"

"Do they have good food?" her companion asked.

I couldn't help myself.

"It's the best bar in Washington," I said, beaming.

"What do you usually get there?"

As I strolled away, I saw them getting closer to the door.

"It says they sell cigars. Do you think they have, like, a non-smoking section?

"I don't think you can actually smoke in there."

I hope they met Leo.