Design by Frank Gehry will be modified again

The family of President Dwight Eisenhower has agreed to support a modified proposal for the Eisenhower memorial, reversing years of opposition to controversial design elements envisioned by architect Frank Gehry.

Susan Eisenhower, a granddaughter of the former president, announced the family’s decision in a letter to former secretary of state James Baker, who has supported the Gehry design as a member of the memorial’s advisory board.

"While some of us may have had other preferences in the past, all of us support your proposal," Susan Eisenhower wrote in the letter, which was included in a Monday press release by the Eisenhower Memorial Commission. "We recognize that your recommendation offers a compromise, one which all Americans who loved the general and the president can support."

The memorial design has already undergone several revisions to reduce concerns about its more controversial elements.

The current design features a memorial core with three statues of Eisenhower in different periods of his life: as Supreme Allied Commander, president, and as a young Kansas farm boy. A giant metal tapestry twisted to depict the landscape of Abilene, Kansas, looms over the memorial core, suspended by eight-story-tall limestone columns. Two limestone monoliths stand at the other end of the memorial park. 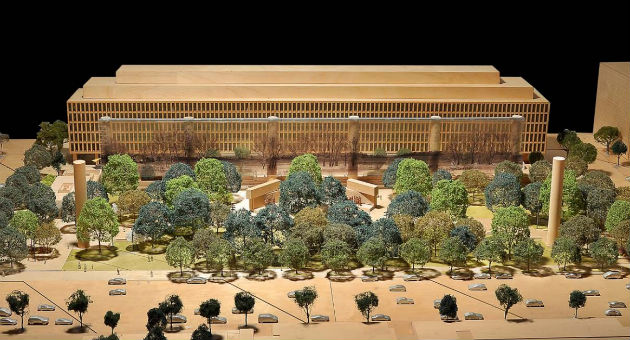 The press release stated that the metal tapestry would be changed to include a representation of the Normandy beaches in peacetime, to celebrate the D-Day invasion that Eisenhower oversaw during World War II. The new design will also include a "renewed focus on Ike’s home state of Kansas." A source with knowledge of the new design told the Washington Free Beacon that the young Kansas boy element of the memorial would be placed "somewhere else on the site."

The Eisenhower commission stated that it will work with Gehry "to begin making the agreed upon modifications and move the project forward with dispatch."

The family objected at the time to the memorial’s emphasis on "Eisenhower’s roots rather than his accomplishments," and expressed concern that its most ambitious element, a modernist metal tapestry suspended by eight-story-tall limestone columns, would fall out of fashion and into disrepair.

Susan Eisenhower, in 2012 testimony to Congress, said the memorial’s metal tapestry and columns evoked Cold War imagery like the Iron Curtain and missile siloes. She requested that element of the design be removed altogether.

Opponents of the Gehry design expressed disappointment in the Monday announcement. 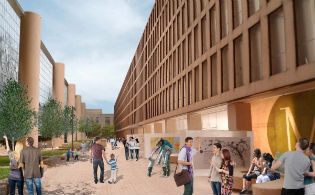 "It is extremely disappointing that Eisenhower family has come to accept the enormous metal tapestry that will, if built, be forever known as the ‘Iron Curtain.' The symbolism could not be worse," said Justin Shubow, president of the National Civic Art Society.

"Furthermore, no design modification can overturn the fact that the celebrity architect was chosen through a rigged, secretive, and undemocratic process," Shubow said.

The revised design and the Eisenhower family’s decision were kept secret before the Monday announcement, leaving even the commission’s congressionally appointed overseers in the dark.

Bruce Cole, a member of the Eisenhower commission who has been critical of its decisions, said he had not been told about the news before being contacted by the Washington Free Beacon.

The Eisenhower family’s support will bolster the Eisenhower commission’s effort to restore congressional funding for the memorial’s construction. The commission has struggled to raise funds from private sources for the $150 million design.

The news will also shore up support for the Gehry design from veterans groups. The American Legion, one of the nation’s largest veterans groups, has stated it would only support the design if it were deemed acceptable by the Eisenhower family.

Veterans remain divided about the Gehry design. Just two weeks ago, 58 admirals and generals announced they wanted the design to be scrapped.