Former RNC chairman and senate candidate Ed Gillespie launched a new ad on Monday criticizing incumbent Mark Warner (D., Va.) for refusing to fight a bill in the U.S. Senate that would revoke the NFL's tax-exempt status if the Washington Redskins keep their name.

"Mark Warner refused to answer if he supports the bill or not," the ad's narrator said. "Why won't Warner fight the anti-Redskins bill? Why won't he answer the question?"

Unlike Senate Majority Leader Harry Reid (D., Nev.), Gillespie prefers not to waste time on legislation against a name that the general public is overwhelmingly against changing.

"I'll oppose the anti-Redskins bill," Gillespie says in the ad. "Let's focus on creating jobs, raising take-home pay, and making our nation safer–and let the Redskins handle what to call their team."

Warner also voted to confirm the FCC chairman, who is considering fining broadcasters for saying the Redskins name. 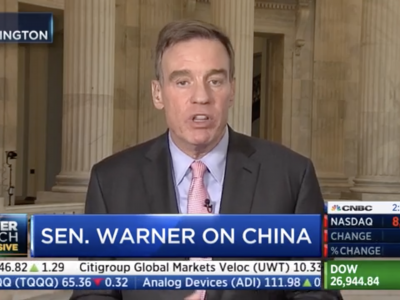