When a gay activist group handed out free bus and ferry tickets to "self-identifying Trans, Black, and/or brown" people headed to New York's Fire Island over Juneteenth weekend, it said the goal was "transportation equity." But lawyers tell the Washington Free Beacon that the move likely ran afoul of civil rights laws that ban race and gender identity discrimination, reflecting a broader rift between elite mores and legal safeguards.

The Black and Brown Equity Coalition of Fire Island says it works to foster "a sense of belonging" on Fire Island, a mecca for New York's gay and transgender community. It advertised the free tickets in a Facebook group—the "Boys of Fire Island"—posting on June 17 that the tickets would "make our events look more like the queer community at large."

"One would have thought that racial discrimination on buses was a thing of the past," said Michael Buschbacher, a former Justice Department official now working in private practice. "Apparently not."

The ticketing plan is rife with potential civil rights violations, Buschbacher and others told the Free Beacon, including potential violations of the Civil Rights Act of 1866, which bans racial discrimination in private contracting, as well as New York State's Human Rights Law, which bans discrimination in public accommodations based on race and gender identity. As a 501(c)(3) nonprofit, the Equity Coalition is bound by both laws.

In the run-up to the holiday weekend earlier this month, the Equity Coalition asked two public accommodations, Bay Bus Fire Island and Sayville Ferry Service, to provide the group with 54 free tickets for "volunteers and staff" running events on the island, according to an email from the group to the bus service reviewed by the Free Beacon. The Equity Coalition then distributed those tickets based on race and gender, the group's Facebook post suggests.

The Equity Coalition is extreme even by the standards of other progressive groups. It launched its own pride parade, the coalition's website states, after learning that Fire Island's main parade would include police officers. It also trumpets the importance of "white accomplices" to its social justice work, which involves helping those "most impacted by racism, transphobia, xenophobia, colonialism, white supremacy culture, and hyper-capitalism."

The free tickets reflect the race-conscious consensus that has formed throughout public and private bureaucracies, even—and perhaps especially—those that claim to be concerned with race discrimination. The Biden administration in 2021 allocated billions in pandemic relief funds to minority owned-restaurants, and multiple states, including Utah, in January gave minorities first dibs on scarce COVID-19 drugs in the name of "health equity."

Such schemes have proliferated amid concerns that they violate federal law: Utah was told that racially rationing COVID drugs was illegal but did so anyway with the blessing of the Biden administration.

As blue states extend civil rights protections to more and more groups, these clashes between law and policy may become more frequent, if the Equity Coalition is any indication. New York in 2019 updated its human rights law to preclude discrimination based on gender identity. Offering free tickets to transgender people—but not cisgender people—is a "presumptive violation" of that law, said Dennis Saffran, a New York City attorney who served as general counsel to the New York State Division of Housing and a special assistant to the New York State attorney general.

The law covers organizations that are leasing public accommodations, Saffran added, not just the accommodations themselves. If New York courts treat the Equity Coalition as a lessee of the bus and ferry services, it can be hit with penalties and even lose tax-exempt status in the state.

It could also lose its federal tax-exempt status, another lawyer said. The Equity Coalition is part of a 501(c)(3) nonprofit, PODER Inc., "a Spanglish, nonpartisan organization that is building local power, block by block." The Internal Revenue Service has revoked the tax-exempt status of nonprofits that violate anti-discrimination law, the lawyer noted. Though nonprofits can give out gifts based on race, they can't racially discriminate in contracts or employment.

"If these tickets are being provided in exchange for an agreement to perform work of some sort on Fire Island," Buschbacher said—as the email to the bus service suggests—"then there's a good chance that this discriminatory program is therefore illegal." 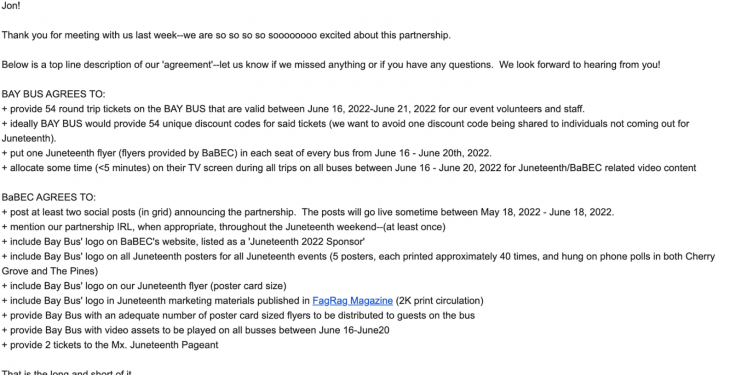 The Equity Coalition did not respond to a request for comment.

A representative of Bay Bus Fire Island, John Luc, said the coalition never told the bus company that it planned to distribute the tickets based on race and gender identity.

"That sort of thing is really frowned upon here," Luc told the Free Beacon.

Update June 28, 10:48 p.m.: An earlier version of this story incorrectly stated that Michael Buschbacher said the Equity Coalition could lose its federal tax-exempt status. We regret the error.