A majority of justices were skeptical that a 2017 Republican tax bill endangered the entire statute. While that law created doubts about the continued legality of the controversial mandate to buy health insurance, other popular provisions, such as coverage for preexisting conditions, do not appear to be in danger.

The High Court's new composition seemed to have little effect on the fate of Tuesday's challenge. Justice Brett Kavanaugh telegraphed that he thinks the bulk of the health care law should stand even if the individual mandate is struck down. Justice Amy Coney Barrett raised doubts that one set of plaintiffs even had a right to be in court. Those developments follow dire warnings from Senate Democrats that Barrett's confirmation would endanger health care coverage for millions of Americans.

The Court's apparent direction greatly simplifies the health care agenda for President-elect Joe Biden. A decision striking down the ACA would send the new administration back to the drawing board on health care, while it faces the likely prospect of a GOP-controlled Senate. Biden favors a plan that would make government-funded health care available alongside private plans.

The case arose in December 2017 when congressional Republicans passed the Tax Cuts and Jobs Act. The law effectively zeroed out the individual mandate, setting the financial penalty for failing to purchase health insurance at zero dollars. The Supreme Court said in 2012 that the ACA's requirement to buy health insurance could be upheld as a tax. In turn, a group of red states and a few individuals brought a fresh legal challenge. They reasoned that because the mandate is no longer generating revenue, it cannot be legitimated on tax grounds.

In a highly unusual move, the Trump Justice Department declined to defend Obamacare in court, so a group of blue states led by California intervened to do so.

The biggest issue in Tuesday's case is the question of what happens if the mandate is unconstitutional. The answer turns on a legal doctrine called "severability," or a general preference for preserving as much of Congress's work as possible when courts find particular parts of a statute unlawful. Two conservative members of the Court, Justice Brett Kavanaugh and Chief Justice John Roberts, plainly indicated that they think the mandate can be severed from the ACA if it has been rendered unconstitutional by the tax law.

"Looking at our severability precedents, it does seem fairly clear that the proper remedy would be to sever the mandate provision and leave the rest of the Act in place, the provisions regarding preexisting conditions and the rest," Kavanaugh said in a key exchange.

Roberts had even more pointed words for Texas solicitor general Kyle Hawkins, who argued for the red states. The chief justice said the Court shouldn't step in to scuttle Obamacare when the Republican Congress itself did not repeal the law, even as it zeroed out the mandate.

"I think, frankly, that they wanted the Court to do that," Roberts said. "But that's not our job."

"Congress left the rest of the law intact when it lowered the penalty to zero. That seems to be compelling evidence on the question," he added.

Critically, however, the chief justice did not give away his thinking on the continued legality of the mandate. He asked only about severability and whether the plaintiffs had a basis for being in court.

Donald Verrilli, the former solicitor general who defended the ACA in court for the Obama administration, appeared before the justices again Tuesday, this time on behalf of congressional Democrats. He noted that millions of people are covered under the ACA and that the entire health insurance sector has operated for years in compliance with its requirements.

"To assume that Congress put all of that at risk when it amended the law in 2017 is to attribute to Congress a recklessness that is both without foundation in reality and jurisprudentially inappropriate," Verrilli said.

As to the legality of the mandate itself, the red states say it cannot be sustained as a tax if it doesn't raise money for the government.

"The mandate as it exists today is unconstitutional. It is a naked command to purchase health insurance, and, as such, it falls outside Congress's enumerated powers," said Hawkins.

The liberal justices sparred with Republican lawyers on this point. Justice Elena Kagan questioned how a toothless mandate could amount to unlawful strong-arming.

Justice Samuel Alito later countered that there aren't other examples of a zero-dollar tax penalty in federal law, making the mandate suspect in its current form.

"Are you aware of any provisions in the [U.S. Code] in which Congress has purported to use its taxing power to say you must do this, and we're going to tax it and we're going to set the tax at zero?" he asked acting solicitor general Jeff Wall, who argued for the Trump administration.

Another issue is whether the plaintiffs even had a legal basis, called standing, for getting to court. In court papers, the blue states said that harm is a necessary prerequisite for a lawsuit, but a mandate penalty of zero dollars isn't harming anybody.

A decision in the case, No. 19-840 California v. Texas, is expected in the spring or early summer. 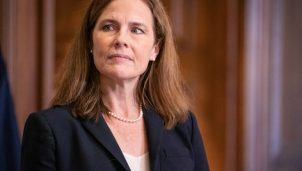 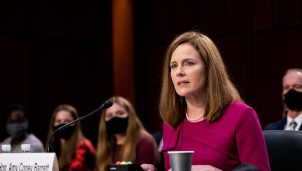 CONFIRMED HOTTIES: Amy Coney Barrett and Other Babes of the Federal Judiciary