State and local governments have spent less than a quarter of the relief funds earmarked to help them fight the coronavirus, a recently released report from the Treasury Department indicates.

Funds from the $150 billion Coronavirus Relief Fund, created by Congress as part of the two-trillion-dollar CARES Act and meant to help defray public health costs, appear largely unused according to the Treasury Department's inspector general. Some states have used less than 5 percent of the funds earmarked for them, including states like New Jersey and Connecticut, which bore the brunt of early coronavirus cases.

The surprising revelation complicates states' claims that they need a hundred-billion-dollar federal bailout to ensure their solvency in the coming months. The question of what money, if any, states should receive in the next round of coronavirus stimulus is likely to be a subject of hot debate in coming weeks, and the inspector general's report challenges Democrats' contention that more money is needed, particularly compared with Republicans' proposal to free up preexisting and evidently unused funds. 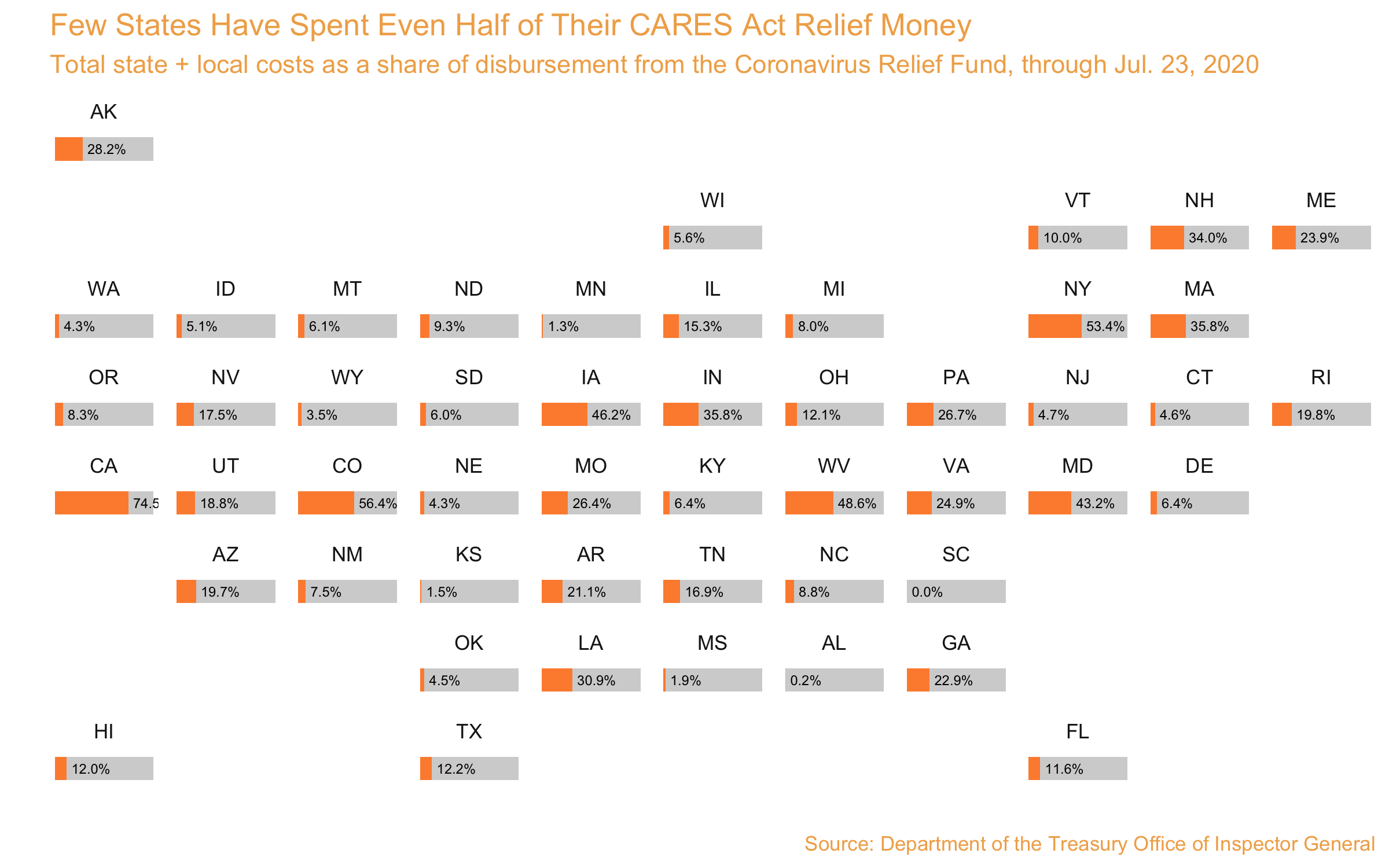 The data indicate that the coronavirus relief fund is heavily undersubscribed throughout the country. Just three states—California, New York, and Colorado—have used more than half of the funds allocated to their state and local governments. By contrast, 23 states have used less than 10 percent of their funding, while 11 have used less than half. Of the nearly $2 billion earmarked for South Carolina, the state reports using just $763,000.

Money available through the coronavirus relief fund was disbursed based on population, with a floor allocation of $1.25 billion per state. Some locales that were heavily hit by the coronavirus appear to have used funds extensively—New York City, for example, has used 99.4 percent of its money—but others, like New Jersey and Connecticut, have not.

The funds are earmarked exclusively for use on public health issues—a subject of contention, as many states see the impending fiscal meltdown instigated by the current recession as an even bigger challenge than the coronavirus itself. The National Governors Association has asked for $500 billion in the next round of coronavirus stimulus.

Democrats want to give it to them—Speaker of the House Nancy Pelosi's (D., Calif.) proposal for the latest round of relief includes $540 billion for a state-and-local bailout. But Republicans are more wary, fearing that federal bailout dollars will be used to shore up flagging state pensions already almost bankrupted by years of malinvestment.

The GOP's solution to this problem, unveiled Monday evening, is to remove the requirement that the Coronavirus Relief Fund only be used for public health issues—thereby freeing up an apparently undersubscribed source of funding without committing to more spending on top of what already appeared in the CARES Act.

Whether or not to provide the states with general funding, and how much of it, is likely to be a major subject of dispute in this week's congressional negotiations over another round of coronavirus stimulus. That will add to disagreements over unemployment insurance and the rapidly increasing size of the federal deficit. The result is likely to be the most acrimonious round of negotiation yet.