Countries Across the World Turn Against China, Data Show

Three in four citizens in over a dozen first-world nations dislike the People's Republic of China, data released Tuesday by the Pew Research Center reveal.

Citizens of nations such as Japan, the United States, and France have grown increasingly skeptical of China over the past decade, with half on average reporting an unfavorable view as recently as 2018. But over the past two years, Pew's survey data show, that figure has spiked, rising to an average of two in three disapproving in 2019, and then to three in four in 2020.

This latest spike is linked to widespread discontent with how China has handled the coronavirus pandemic, which started in Wuhan before spreading to the rest of the world. Majorities across 13 major countries said they believed China has done a bad job dealing with the coronavirus outbreak.

This surging discontent across the world's developed nations is a bad sign for China and for leader Xi Jinping's aspirations for Chinese global hegemony. It further signals that the nation's efforts to paint itself as an alternative to the United States in the wake of the epidemic were unsuccessful, especially in European countries where Chinese gifts of personal protective equipment were turned back due to quality defects in a major diplomatic blunder. 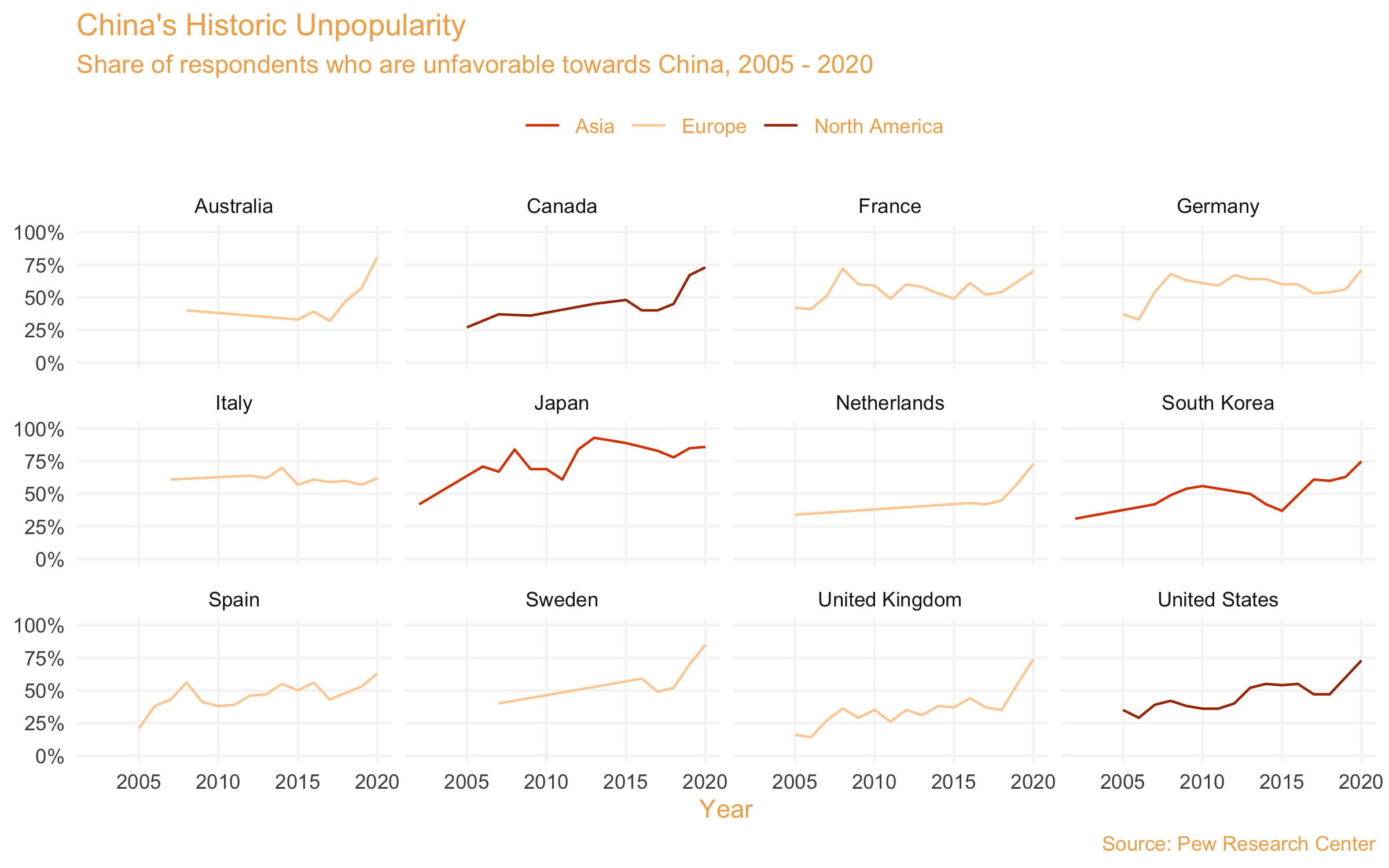 This year was the lowest-approval year on record for 9 of the 14 countries that Pew surveyed. Discontent with the PRC rose in the 12 countries where 2019 data were available, by as much as 19 (in the United Kingdom) and 24 percentage points (in Australia).

Those increases, Pew noted, are part of a "larger trajectory" of growing discontent with China across the developed world. In the United States, majorities of both parties were unfavorable as of earlier this year; across the countries surveyed, disapproval rose with age, but even a majority of respondents ages 18 to 29 were China-skeptical.

Popular criticism of China extends to its leader, Xi Jinping. Large shares of respondents said they had little or no confidence in the Chinese strongman, with an average of less than 20 percent expressing "some" or "a lot" of confidence.

These findings suggest that China's increasing global bellicosity—including its forays into influencing surrounding states and its constant bluster over Taiwan and the South China Sea—have not made it popular with others of the world's most economically advanced nations. The survey offers caution for Americans, however: Across Europe, a majority of respondents said that China, not the United States, is "the world's leading economic power."

Countering China's growing malign influence has become a congressional priority in recent months, particularly as lawmakers seek to reduce American dependency in the wake of the coronavirus pandemic. Republican lawmakers last week floated a comprehensive package of proposals that would, among other things, seek to return U.S. supply chains to American shores; some of those bills are expected to pass in the 2021 National Defense Authorization Act when it receives a full vote later this year.