Dozens of universities, including Columbia and Stanford, are hosting the Chinese government-funded Confucius Institute despite increasing scrutiny from the federal government.

Many elite universities with Confucius Institute programs appear to be unfazed by the Trump administration's decision last week to designate the D.C-based headquarters of the program as a "foreign mission"—a label the U.S. government applies to entities it finds to be directly controlled by a foreign power. Despite the announcement, nearly 50 colleges and universities will continue their partnership with Confucius Institute programs, which comes with up to $1 million in Chinese government funding.

The cushy partnership between American universities and the Chinese regime has restricted academic freedom on campus, frequently forcing administrators and faculty members to self-censor to avoid Beijing's wrath. While many universities rely on the organization to support Mandarin language classes and Chinese culture lessons, the program also bars its staff from discussing topics considered taboo by the Chinese Communist Party, such as the Xinjiang concentration camps or the Hong Kong protests.

Growing bipartisan criticism for the program has pushed more than 50 colleges and universities to cut ties with the Chinese government. In just the first eight months of 2020, 22 universities have eliminated chapters of the Confucius Institute—one more than the number of chapters shut down in all of 2019.

Sen. Marsha Blackburn (R., Tenn.), a consistent critic of the Confucius Institute in Congress, applauded the universities for ending their ties with the program but warned that the colleges might still find alternative means to partner with the Chinese government.

"I am pleased that some universities … have recognized the harm Confucius Institutes cause to higher learning," she said. "However, our work here is not done until every Confucius Institute is closed, even if they present themselves under another name or through another branch of the Hanban, and we must stay vigilant and flexible to keep up with Chinese tactics." 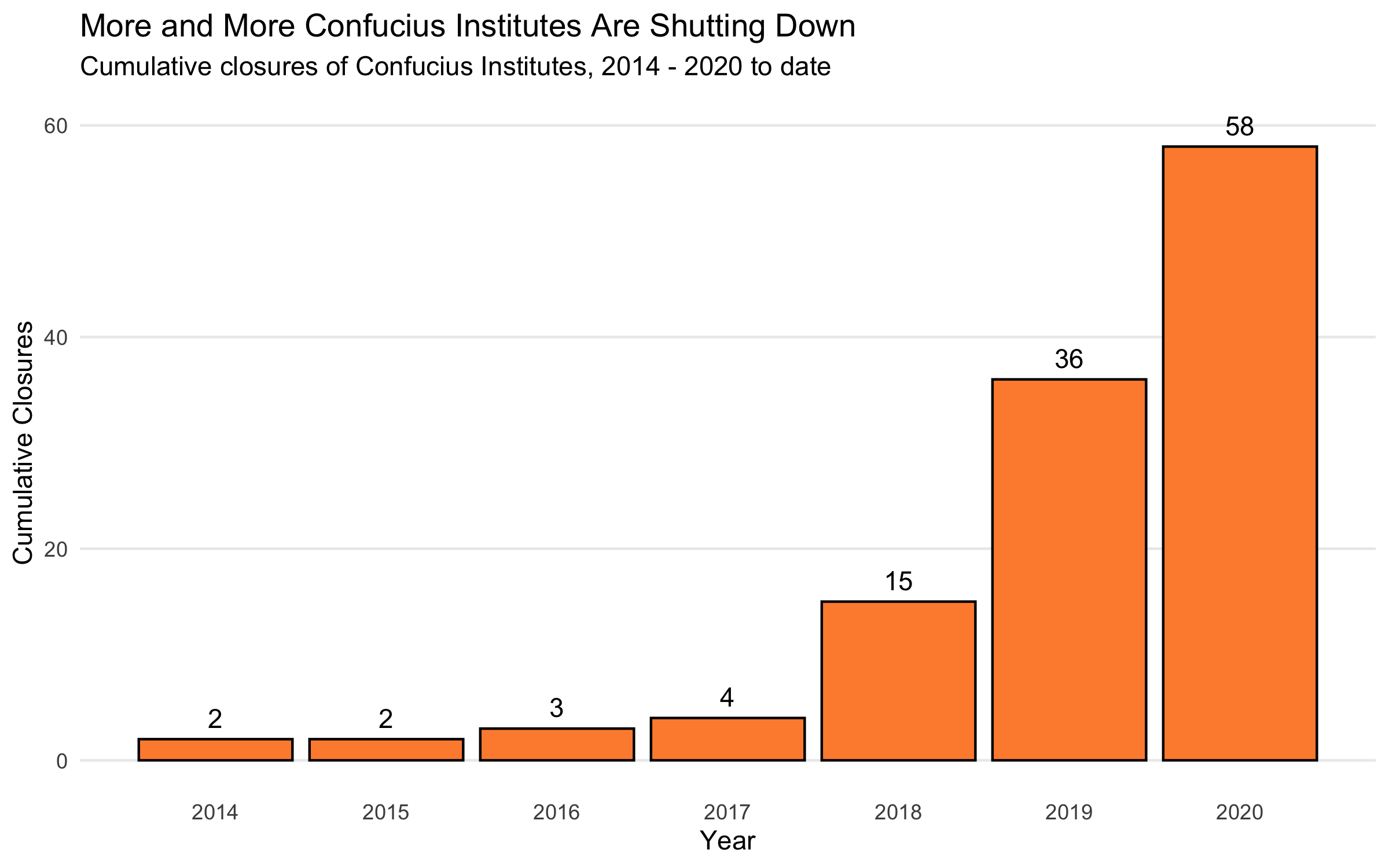 After the White House announced the "foreign mission" designation, the Washington Free Beacon reached out to all U.S. colleges and universities with an active Confucius Institute. Few colleges responded—some said they intend to maintain ties with the program, while others said that they had preexisting plans to phase out their Confucius Institute programs prior to the White House announcement.

The Chinese government has funneled more than $150 million into U.S. universities to fund more than 100 Confucius Institute programs across the country, according to a Senate report. Its impact on academic discourse alarmed legislators, who have passed bipartisan legislation to curtail its influence. Despite bipartisan concerns, several universities, such as George Washington University and SUNY Albany, told the Free Beacon that the program poses no threat to academic freedom.

"The State Department's designation pertained to the Confucius Institute U.S. Center based in Washington, D.C., not campus-based institutes," a SUNY Albany spokesman said.

The number of Confucius Institutes in the country has rapidly decreased in the last two years. While universities cite numerous reasons for the closures—from budgetary concerns to the current pandemic—the political pressure has played a large factor, according to Rachelle Peterson, director of research for the National Association of Scholars.