But saying it like that is a bit unfair to Romney

New York Times reporter turned New York magazine blogger Annie Lowrey thinks people should stop talking about Hillary Clinton’s insatiable appetite for money and the sense of enjoyment and entitlement she presumably gets every time she disembarks a Gulfstream jet on the way to her presidential suite near some publicly funded university that’s paying her five times the median income to give a one-hour speech to a room full of rich people.

At the very least, Lowrey thinks we should stop comparing Hillary to that heartless vulture capitalist Mitt Romney, who is clearly out of touch with average Americans because he pals around with NFL owners. The Clintons, on the other hand, merely pal around with Kazakh oligarchs.

Hillary’s approval rating may have plummeted since her return to the national spotlight, but that’s nothing to worry about because, as Lowrey said on Morning Joe on Monday: "At some point she’s going to be running against a Republican"—i.e., someone who hates poor people and minorities, and applauds when One Percenters like the Clintons shamelessly exploit tax loopholes to avoid paying their fair share.

If Hillary can find a way to be less defensive and speak less awkwardly about her wealth, the profound evil of her GOP opponent will "ultimately neutralize the issue of Clinton’s wealth if and when she runs."

Clinton will offer a set of progressive economic policies that will likely raise taxes on upper-income families to pay for social services for lower-income families. (My guess is that she will propose a universal early-childhood education program.) She will run against someone who will likely cut taxes and social services, perhaps deeply. It's easy enough to paint Clinton as out of touch while she is running against a ghost. But at some point, she will be running against a living, breathing Republican, like Romney, one proposing policies like Romney's. And that policy context will make it a lot harder to paint Clinton as an out-of-touch one-percent-type—even if she does make $225,000 a speech and jet around on a Gulfstream.

This is why the same people who cheered the Occupy Wall Street movement won’t make a huge fuss about the Clintons’ deep ties to Goldman Sachs et al (So what? She supports higher taxes on the rich!), but will protest a hospital for taking money from David Koch (He only cares about his bottom line!).

In many ways Hillary is the perfect embodiment of this liberal mindset. She’s committed to fighting poverty and income inequality one charity gala at a time, growing increasingly confident in her moral superiority over her ideological opponents. Her multiple mansions are her just reward for being a good person. She has earned the presidency.

Clinton also thinks it’s pretty adorable that students at the University of Nevada, Las Vegas would protest her $225,000 speaking fee in the face of rising tuition costs, and then refuse to return the fee to the university as they requested. Those silly commoners don’t know what’s best for them, and what’s best for them is for Hillary Clinton to make a lot of money giving lots of speeches.

"They’re not worried about my speaking or my household," she recently told ABC News. "They’re worried about their own. And that’s the kind of debate I think I’m furthering as I go around the country speaking." And the liberal bloggers in New York and Washington couldn’t agree more. Maybe a majority of voters will find Hillary to be likable enough, and Republicans will probably find a way to screw up. But objectively speaking, she is no less out of touch with middle class Americans than Romney was.

When it comes to actual policies, Hillary will support the ones that can be most easily appropriated to attack the moral character of the people who oppose them (i.e., Republicans), and Jon Stewart will EVISCERATE them on television. But there’s plenty of evidence to suggest that actual policies were less important in determining the outcome of the 2012 election than the broader question of which candidate could relate to average voters.

Exit polls, for example, show that voters preferred the "in touch" Obama, despite giving Romney a narrow edge on the economy, rated as the most important issue in the election.

At the end of the day, that didn't matter, in part because enough of them were convinced that Mitt Romney would literally inject their loved ones with cancer, thanks to a pro-Obama Super PAC, but also because Romney was an actual out of touch rich person. And so is Hillary. In fact, comparing her to Mitt Romney is actually a bit unfair to Mitt Romney. Seriously, when is the last time she used duct tape or picked up other people’s trash? 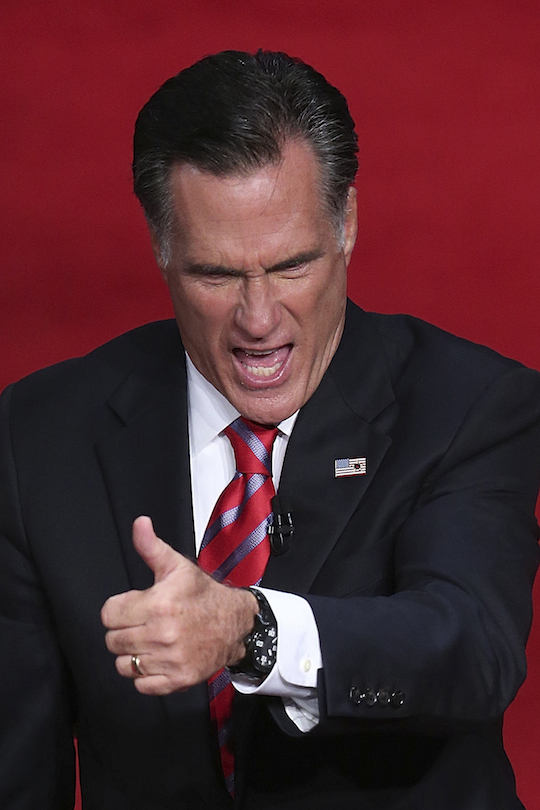