How Trump Can Cut Aid to a Horrible U.N. Program

These have been good weeks for supporters of the U.S.-Israel alliance and peace in the Middle East. The president made history with his Jerusalem announcement, and his critics—the U.S. foreign policy establishment, Europe, the media—were embarrassed after their dire and hysterical predictions of violence failed to come true.

What's more, it appears the president and his advisers, in dramatic contrast to the previous administration, take the Palestinians seriously and understand that anti-American, anti-Israel, and anti-Semitic rhetoric from Palestinian leaders is meaningful. The president also appears to believe that enormous U.S. spending on the Palestinian Authority—more than $5 billion since the mid-1990s—has earned us a negative return. The billions haven't promoted peace, but instead kleptocracy, terror, and hate—in the course of making Palestinians the greatest per capita recipients of foreign aid in the world.

Conflict with Israel is what keeps American and European aid money flowing, so conflict is what we get. As Trump might tweet: Not smart!

There are three major streams of U.S. funding for the Palestinians: INCLE, ESF, and UNRWA. 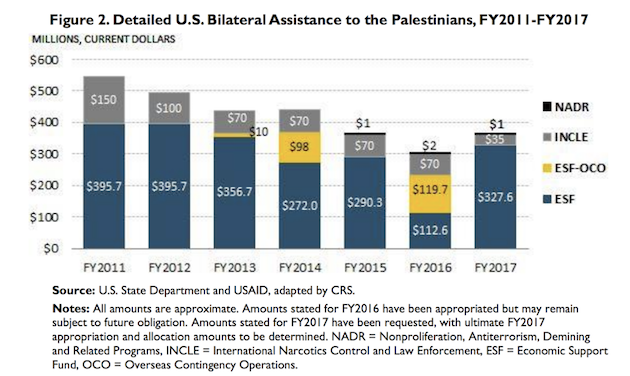 INCLE is the security assistance program, which costs $70 million a year (although it was reduced to $35 million in 2017) and is probably the worthiest aid program. The money promotes the competence of PA security forces, cooperation with Israel, and helps the PA keep Hamas and other jihadists down in the West Bank.

ESF, the Economic Support Fund, is the program through which the United States directly assists the PA, in recent years between around $300-$400 million per year. ESF money is paid to PA creditors (mostly hospitals and Israeli utility companies) and funds USAID projects, many of which supplant the basic governance responsibilities of the PA (building infrastructure, etc.). Since 2015, the United States has reduced ESF funding equivalent to PA spending on its "pay for slay" program, in which it pays salaries to terrorists and their families. The amount of this reduction is classified, largely to help the Palestinians save face. Today, with the Taylor Force Act near passage, ESF will soon be reduced even more. Any remaining amount should be subject to cuts, of course, because foreign aid isn't charity or an entitlement. But what's left to cut may be fairly small.

The big, expensive, terrible program that desperately needs reform is UNRWA. This UN bureaucracy was established in 1950 after Israel's War of Independence, when a coalition of Arab states failed to wipe the new nation off the map. The war the Arabs started but lost created around 650,000 Arab refugees. These refugees were then exploited by the UN and the Arab states, which realized they could be used as pawns in the permanent war on Israel's legitimacy.

UNRWA was created, and along with it a clever new definition for refugees: For Palestinians, unique among all people in the world, refugee status would be hereditary. This has been terrible for Palestinians, but it has worked splendidly in maintaining a false grievance for Israel's detractors, who can blame the constantly growing "refugee crisis" on Israel. Today there are 5.2 million "refugees" living in Jordan, Syria, Lebanon, Gaza, and the West Bank, only a fraction of a percentage of whom were even alive during the war in 1948 and 1949.

As the number of fake refugees increases, so does UNRWA's budget, which today is well north of $1 billion a year. Since the beginning the United States has donated close to $6 billion in total, and is (by far) UNRWA's single biggest donor at around $400 million a year. The United States is contributing to the cruel exploitation of millions of Palestinians, who are raised in dependency, grievance, and victimhood, and taught in UNRWA schools and community centers to believe in the fantasy of Israel's destruction and their "return" to homes they never had.

1) In the short term, a shot across the bow. UNRWA has something called a "cash assistance" program that involves UNRWA literally handing out cash to people in Gaza (controlled by Hamas) and Syria (controlled by Iran). There is no accountability or oversight for these disbursements, which in 2016 amounted to an astonishing $192.3 million. How skeptical should we be of this program? Here is how UNRWA itself describes it:

"Cash assistance is a dignified, cost-effective, and flexible tool to address the most immediate and urgent needs of vulnerable refugees in crisis. By allowing conflict-affected civilians to independently determine and meet their respective essential priorities, short-term cash assistance boosts individual coping strategies and enables refugees to allocate scarce financial resources to their own household priorities."

UNRWA's cash handouts program undoubtedly involves an enormous amount of waste, fraud, and diversion of funds to terrorists and other bad actors. Future U.S. donations to UNRWA should be conditioned on either the termination, or the strict reduction and dramatic reform, of this program.

2) In the long term, condition U.S. assistance on a change in UNRWA's definition of a refugee. U.S. and international law reject hereditary refugee status for obvious reasons. UNRWA should adopt the refugee definition that is observed everywhere else in the world, including at the UN: that of the 1951 Geneva Convention. This is the policy change UNRWA fears the most—and it is the policy change that will do the most good, because it will allow the descendants of refugees from 1948 to finally have a chance at normal lives.

Delaying or reducing the U.S. donation to UNRWA this year won't accomplish much. What will put us on a much better path, and what the administration should do if it wants a lasting humanitarian legacy in the Middle East and enormous savings for U.S. taxpayers, is condition future donations to UNRWA on permanent policy changes. It is time for UNRWA's mission to be transformed from enlarging the number of "refugees" and promoting an ever-expanding problem, to helping integrate Palestinians into the countries where they live, consistent with the treatment of all other refugees in recent history.