Thanks to the influx of television money, every school in the "Big Five" conferences have similarly lavish budgets. So to score that next five-star defensive back, college football is getting more creative than ever to poach recruits. Epic photoshops and coach websites are two such tools.

For Texas Tech head coach Kliff Kingsbury, he has a recruiting edge no other coach in America can claim. 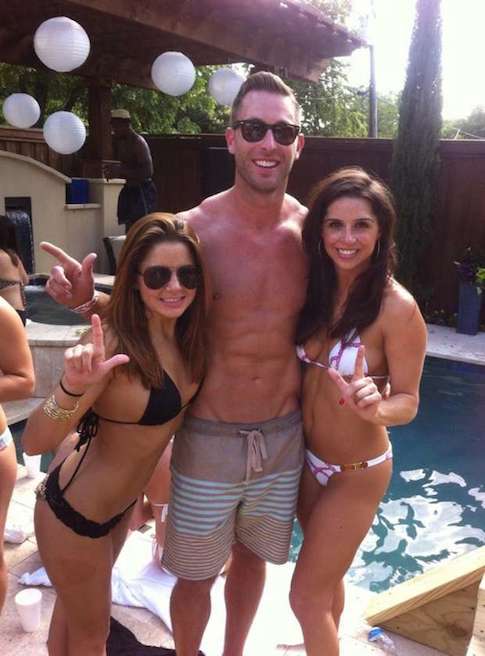 This blog usually lauds such stellar recruiting, but it bears pointing out Kingsbury is getting paid nearly $2 million a year to lead and mold young men. What message does that send to recruits' families that the 35-year-old head coach is creeping in public and getting photographed without a shirt on?

While Kingsbury is single and the ladies above are supposedly of-age, he should know better. According to Clay Travis who broke the photo, the lady on the right is named Bonnie. She's a current Dallas Mavericks cheerleader. 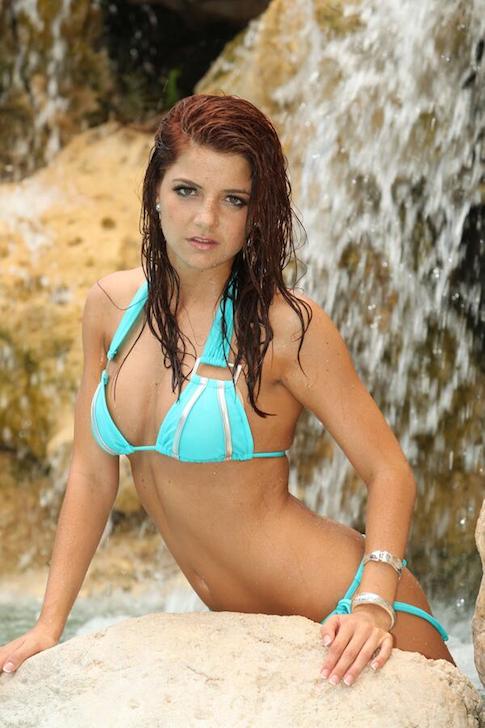 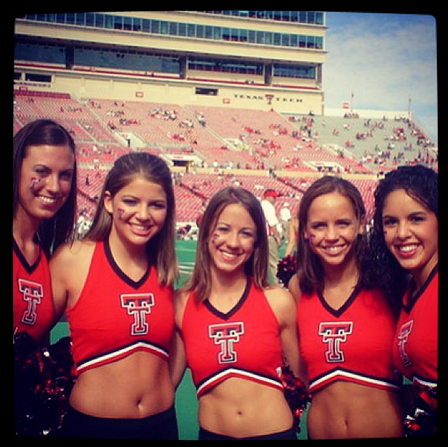 Travis posted the photo on condition of anonymity so its likely that Kingsbury, Bonnie, or the third lady did not plan on the snapshot being plastered all over the Internet.

Even if Kingsbury resembles Ryan Gosling, it's mind boggling he would allow himself to be put in a position that could harm his image, Texas Tech football, and the school writ large.

Didn't he learn anything from his former quarterback? (Ed. Note: Kingsbury was the offensive coordinator and quarterbacks coach for Johnny Football's Heisman season.) 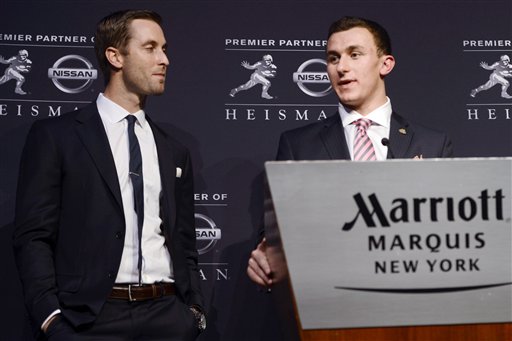 Penn State offensive line coach Herb Hand tweeted this morning that he rescinded a scholarship offer to an athlete because of, you guessed it, something posted on the Internet.

Dropped another prospect this AM due to his social media presence…Actually glad I got to see the ‘real' person before we offered him.

If we're holding players to that high standard, why aren't we holding coaches to the same? It's one thing to pose with Bonnie in a bar. That's just part of college football coach politicking. 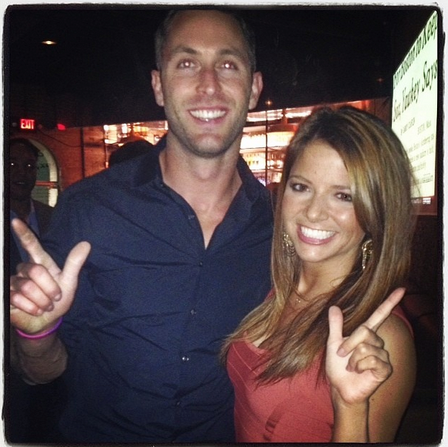 It gets dicey when Kingsbury uses his recruiting charms on a prospect's mother. College football has gotten so competitive, coaches are now using their uncanny resemblance to one of the most desired men in Hollywood to sweet talk recruits' mothers. Coaches flirt with moms all the time, but they don't look like Kingsbury and they aren't single.

Oregon has Nike and Texas Tech has Kliff Kingsbury. Whatever it takes to win, I guess. If you were the most eligible bachelor in Lubbock, why not use it to your recruiting advantage? At least he remembered a shirt this time. 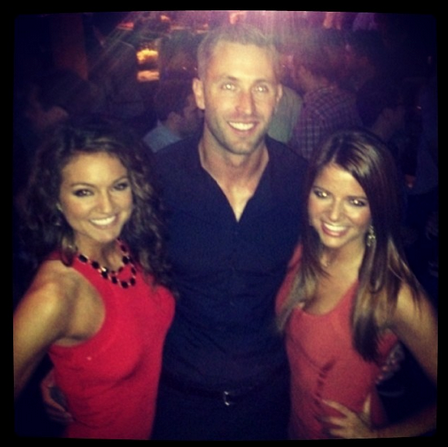 I can't crush on Kingsbury's behavior too hard because it's a problem at Texas Tech at large. First off, the #OurCoachIsHotterThanYourCoach hashtag sucks. It chews up too many characters on Twitter. You can be the hottest person on the planet but if you don't back it up with victories, your time is limited until the next P.Y.T. comes along. 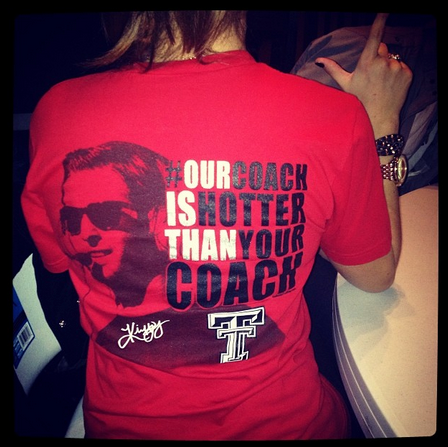 Kingsbury lost five straight games to end last season. A first year head coach may get a pass for that kind of slide, but it's unacceptable for future seasons. At least Bonnie was able to cheer for a playoff team last year. 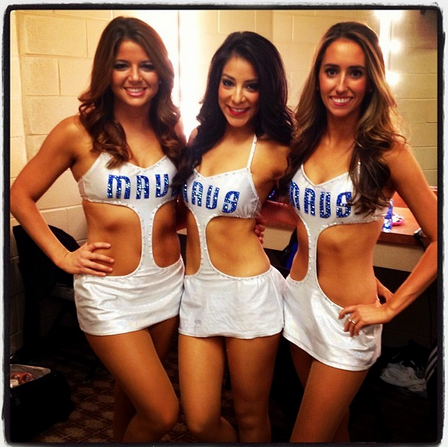 I know Kingsbury is a legend in Lubbock, but consider what happened to Mack Brown at Texas. Brown was coaching in the national championship in 2010; three short, sub-par years later, he was sent to pasture at ESPN to yap across Lou Holtz. No one is going to want to see Kingsbury, with or without a shirt on, if he can't beat Oklahoma or Baylor. 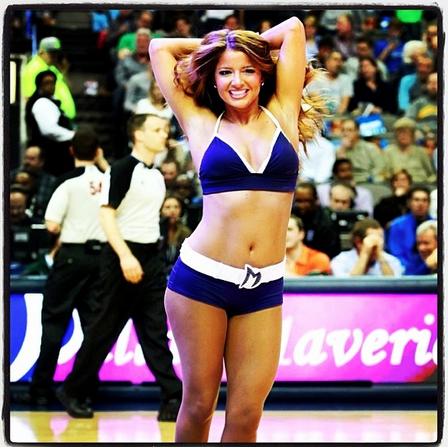 Mack Brown won a national championship not even ten years ago, and now look at him. Good looks only go so far. Bonnie observed a championship-level coach who keeps a low profile while cheering for the 2011 Mavericks. Rick Carlisle is one of the best coaches in the NBA. 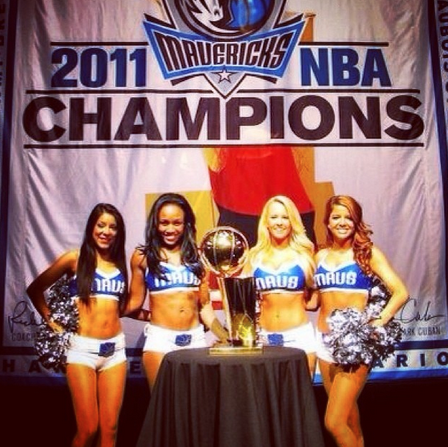 If you're going to pose with fans, Kliff, be smarter. And remember a shirt.