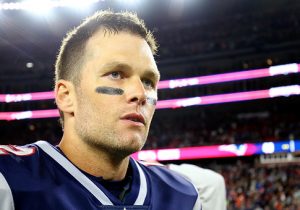 Something about Tom Brady was different. New England sports diehard Jerry Thornton realized this when the cover of the February 18, 2002, edition of People magazine caught his eye. "Why I Had Plastic Surgery" blared the big-blocked letters. But it wasn't Greta Van Susteren featuring her new "talk of TV" look that grabbed his attention. Thornton was fixated by the top right corner: a space occupied by a visor-wearing quarterback who until now had been a pop-culture anonymous. "Those lips, that chin, that Super Bowl win!" read the accompanying tease with Brady's photo. If Celtics icon Larry Bird had gotten a "That wispy mustache, those tiny shorts—the best in sports" treatment, Thornton couldn't recall.