The Fareed Zakaria of comedy?

Earlier this week, former comedian Stephen Colbert launched a disgusting attack on hardworking female reporter Alana Goodman, who recently uncovered correspondence  between Hillary Clinton and left-wing radical Saul Alinsky. Liberals immediately sought to discredit Goodman’s work, presumably because she is female. Being a devoted liberal and friend of the Clintons, the Colbert Report host was obligated to pile on.

Unfortunately, Colbert and his team of writers couldn’t even be bothered to come up with original "jokes" for the segment, and resorted to plagiarizing a member of the left-wing blogosphere, a community renowned for its sophisticated sense of humor. In the course of mocking Goodman’s female reporting, Colbert said:

There's so much we still don't know about [Clinton]. For instance, I went even further back into her mysterious past and obtained a letter Hillary wrote in 1953. It proves she was in communication with a foreign leader. It starts "Dear Santa."

The award-winning celeb appears to have stolen the idea from Oliver Willis, a Media Matters research fellow. 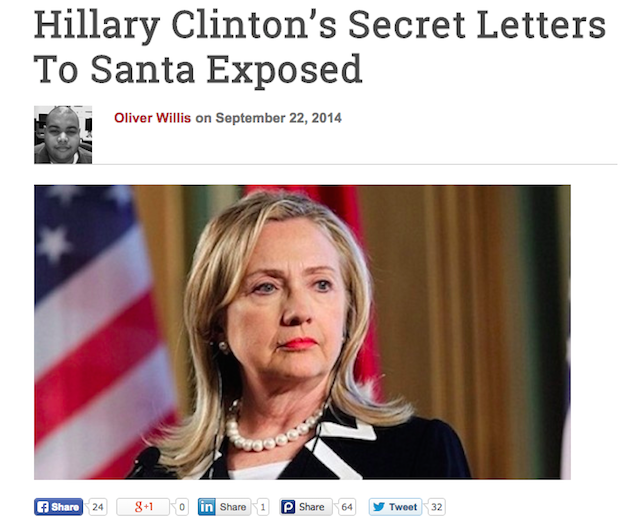 Colbert's fans deserve better. Presumably, CBS isn't paying him millions to replace David Letterman so he can regurgitate nasty cracks from the likes of Oliver Willis. That's just lazy. The irony, of course, is that the Santa "joke" actually underscores the significance of Hillary's connection to Alinsky. Though fictional, the Santa Claus mythology is steeped in leftist ideology, and threatens to indoctrinate young minds into a culture of government handouts. And that's nothing to laugh at.