Yesterday's/today's dumb controversy runs something like this: During a meeting with some people from California about illegal immigration, Donald Trump called MS-13 members "animals," which the Democratic Party and its militant wing, the media, misrepresented as Trump having said that all immigrants are animals. See, for instance, how the NYT describes Trump's statement:

Trump lashed out at undocumented immigrants during a White House meeting, calling those trying to breach the country’s borders "animals" https://t.co/aQNeu29T6e pic.twitter.com/ogrFKaWyDZ

(Update: For a more exhaustive treatment of the coverage, see David Rutz's piece this morning. /Update) The problem with getting outraged over calling members of MS-13 animals is that, for starters, they behave like animals: 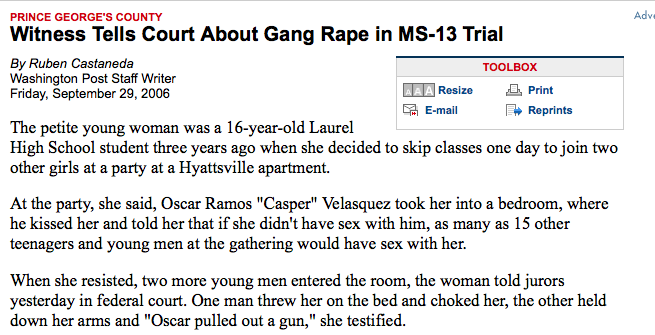 The more pedantically minded will say "Oh, but, it's still wrong to call them animals because they are humans and not animals and all humans are worthy of dignity." This is foolish literalness that obscures the point more than it illuminates any real problem with what was said. I don't, for instance, think that the media is actually the militant wing of the Democratic Party: this would suggest that I think the media, writ large, is a terrorist organization dedicated to furthering the ends of a corrupt pseudo-terrorist entity through political violence.

The media only does violence to context! And the context here is clear: Trump was talking about MS-13 members and other violent criminals who a.) enter the country illegally and then b.) do horrible things. This isn't rocket science; it's basic reporting. Tweeting that Trump called immigrants animals is at best deeply misleading and more likely a willful misinterpretation designed to gin up angst amongst the easily riled.

That's only part of the problem, however. The other issue here is that when the media conflates MS-13 with non-kill/rape/control illegal immigrants they play right into Trump's hands. Commingling the two groups of immigrants suggests to people who are deeply concerned about illegal immigration that folks in favor of granting illegal immigrants amnesty don't actually care if a few murders and rapists come along for the ride. It suggests that they aren't truly interested in trying to restrict immigration to otherwise-law-abiding citizens who are just here to depress wages and send their money out of the country.

I'm the weird, rare person who really doesn't care either way about immigration and is kind of torn in both directions simultaneously: I'm basically okay with letting the DREAMers stay (it seems cruel to send people who have spent their whole lives here to some country they can't remember, and saying "blame their parents!" doesn't change that) and I think that legal immigration levels should be increased (We Are A Nation Of Immigrants™) but also think that illegal immigrants shouldn't be allowed to stay solely by dint of the fact that they're here illegally (I am a law and order reactionary, after all). But I do find it … strange that the pro-immigration side has let itself be worked into a position where they're forced to explain how the murderous rapists of MS-13 don't behave like animals. That doesn't strike me as a winning strategy.