It’s come to this. Because the entire American media establishment could not bring itself to ask Hillary Clinton about her 1975 defense of a child rapist, the task fell to, of all places, a British parenting website called Mumsnet.

The website asked its readers—aka "mumsnetters"—to submit questions for the former secretary of state, who took part in a webcast-style interview over the weekend. One of those questions prompted Clinton to make her first public comments on the rape case since the Free Beacon unearthed previously unpublished audio tapes of Clinton discussing it in the early 1980s, a story that broke nearly a month ago, on June 15.

Clinton answered with clinical, poll-tested precision, making the case that she, in a way, was also victim because she was forced to defend a child rapist against her will—even though she said on the newly unearthed tapes that she took the case "as a favor" to a local prosecutor.

Meanwhile, Hillary’s rape comments are still the lead story on the Mumsnet homepage, next to a Sticky Chinese Chicken recipe that is "guaranteed to become a family fave."

It's not as if the U.S media didn't have the chance to ask the question themselves. Since the Free Beacon story posted on June 15, Clinton has been interviewed by: CNN, Fox News, C-SPAN, ABC News, and PBS. She was also interviewed by Walter Isaacson at the Aspen Ideas Festival.

How many times do you think she was asked about the rape case? (Hint: It’s less than the number of years in prison to which Hillary’s child rapist client was sentenced after Hillary, in her own words, "got him off.") Maybe they were all too busy laughing it up?

So to recap, the U.S. media big shots reluctantly covered the publication of the Hillary tapes, unearthed by an "anti-Clinton website," then promptly forgot about it, and, despite numerous opportunities, failed to ask Clinton to respond to the story. Weeks later, they are bested by a British website for moms, are forced to frantically cover the story once again, and are finally beginning to acknowledge some of the problematic details of the case. 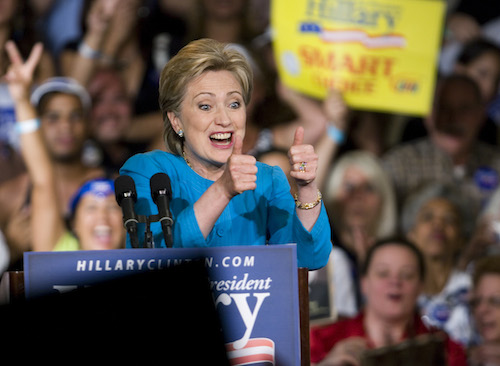