The Kamala Harris campaign is struggling to come to terms with the swift demise and inevitable collapse of a once-promising candidate who no longer has the authority to arrest and imprison her enemies. Case in point: Harris campaign staffers have started lashing out at meme-blog editors on Twitter.

"This kind of stuff is just a really horrible look for you guys," the Harris staffer texted. "Frankly, it's whiteness manifest. If Kamala shrugged off a Warren critique of how she wasn't with her on [breaking up] Facebook, we'd get raked over the coals and [Warren] would be lauded as taking on corporate power."

Miller's "blithe mockery here of Kamala, while lauding Warren's style," the Harris staffer continued, was "not up to par" and "a bit problematic."

Smith responded appropriately, writing: "Do you seriously not have real problems? This text makes me think you are totally, totally unready for an actual presidential campaign."

Smith did not, however, denounce the staffer for repeatedly employing the problematically patriarchal phrase "you guys."

This is not the first time the Harris campaign has implied the media have a (possibly racist) double standard when it comes to their coverage of Warren and Kamala. Harris is currently polling at 5.2 percent in the RealClearPolitics national polling average, down from a high of 20 percent in late June.

As if trying to prove Smith's point about campaign readiness, Sams on Thursday tweeted out a terrible photoshop of Harris as president being berated by Speaker of the House Nancy Pelosi (D., Calif.). Also, for some reason, "President Harris" has decided to keep Trump's entire cabinet on staff.

UPDATE: Sams has since deleted the tweet out of shame, but here's a screen shot: 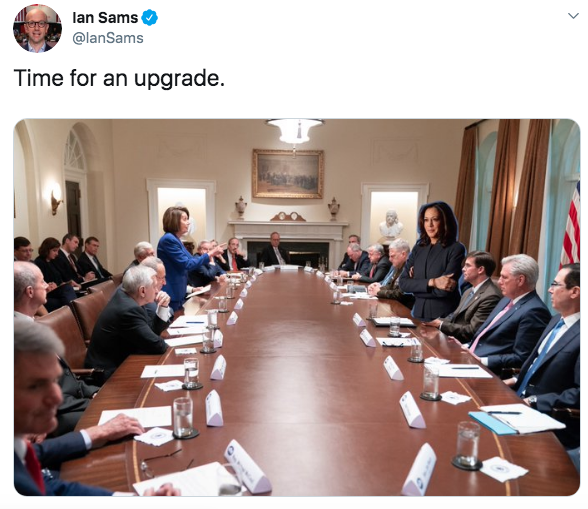 Sams also complained that "Rightwing twitter is a really sad place." However, conservatives are hardly the only ones criticizing the Harris campaign, in particular the candidate's mind-boggling obsession with banning Trump from Twitter. Former Obama bro Tommy Vietor recently described it as "f—ing stupid."