This week, we saw the dark side of what happens when one of the Democrats' new stars in Congress closely follows Alexandria Ocasio-Cortez's advice about Twitter: "Be yourself."

If you're a dishonest buffoon, like Rep. Ilhan Omar (D., Minn.), an active social media presence will help reveal that fact in short order. In the span of two days, she sent two tweets that were equal parts bizarre, false, self-destructive, and, eventually, deleted.

You're well aware at this point of the ongoing furor over a confrontation last week by the Lincoln Memorial between a Native American man, some Catholic high schoolers wearing pro-Donald Trump hats, and some crazy people called the Black Hebrew Israelites. It is now established, despite the best efforts of mainstream media to cover their colleagues' behinds, that this story was horrifically botched from the start and the narrative that MAGA-hat wearing teens ganged up on and harassed Nathan Phillips was balderdash.

But that didn't stop Omar from wading in with a tweet that crammed an astonishing amount of misinformation into 280 characters.

After some conservative outlets—no mainstream firefighters who seek to keep democracy out of darkness apparently felt the story worthy of their time—reported on the tweet, she deleted it Wednesday morning, with no explanation or apology.

A good, if cynical, strategy, for a politician's press office in modern times is to wait it out after sending a dumb tweet. Soon, other stories will come forward, and people will forget about your error.

Unless you're Omar, and you decide to emphatically own ... yourself, as she did Wednesday afternoon. 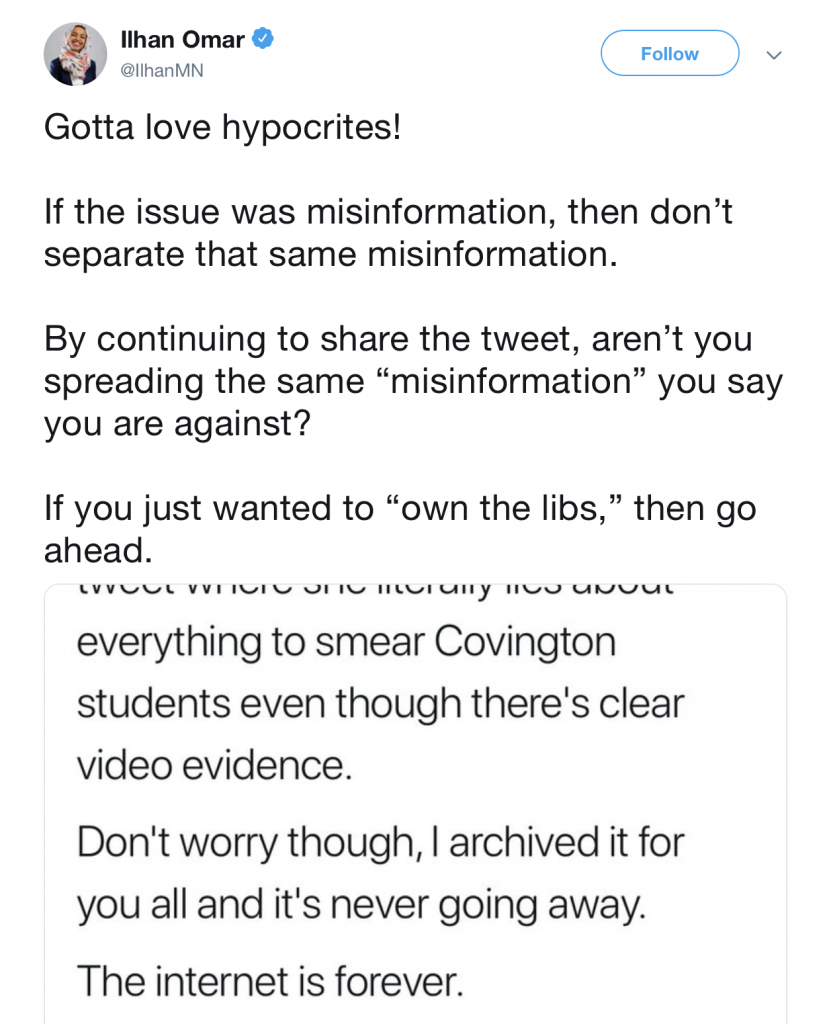 Linking to a conservative account that archived her earlier gobbledygook for posterity, she called the person a "hypocrite" for sharing the tweet full of "misinformation." Again, a tweet she had written and did not apologize for sending, but nevertheless acknowledged was false.

Turns out she was "whipping votes" and the situation was "handled," whatever that means.

Credit is due to Yashar Ali, a rare example of a non-conservative journalist who was troubled by Omar's utter nonsense.

My first thought on Tuesday night was Omar needed a better press office, but then I remembered that she was just taking Ocasio-Cortez's advice.

After all, this is the same person who smeared Sen. Lindsey Graham (R., S.C.) as "compromised" without any evidence. She deceived Minnesota voters about her support for the anti-Israel Boycott, Divestment and Sanctions (BDS) movement. She tweeted Israel had "hypnotized" the world and acted flabbergasted that Jews would find that kind of mystical anti-Semitism offensive.

In short, she's the kind of person who will keep doing these sorts of things. And don't forget, her friend Ocasio-Cortez also said being factually correct isn't as important as being "morally right."