Don’t You Mess With Marilinda Garcia

Sunday’s 33-20 dagger of a loss to the Dolphins was the New England Patriots’ first opening day muff since 2003 and awarded New England sole ownership of the AFC East cellar for the first time since Christmas Eve 2000, which is when Tom Brady took over as starting quarterback. The last time the Patriots were in last place, New Hampshire state representative and Republican candidate for Congress Marilinda Garcia wasn’t old enough to vote.

The Patriots were entering their tenth championship-less offseason, sticking with an aging quarterback/fashion model when Garcia started her congressional run back in February. Sure enough, the Pats’ decision bore fruit in Miami just as I returned to New Hampshire over the weekend to witness the blossoming of Garcia’s campaign before today's primary. On paper, Garcia is a five-star, can’t miss prospect, and I had to make the return trip to see how she performed under the live rush.

No one could have forecasted that the New Hampshire snow would melt away into one of the most scorched-earth primaries in the country. Death Valley doesn’t hold a candle next to New Hampshire's 2nd district in 2014.

Untold ink and treasure has been spilled in New Hampshire’s second district primary over immigration. President Obama’s Ray Guy-esque punt on his promised executive reduction of deportations is sure to affect both Tuesday’s primary and November’s general election.

"As it seems to be the case with the president, it’s a little peculiar," Garcia said. "It’s fine to delay it after the election, but to tell people that’s what you’re doing? He usually seems to telegraph what he’s willing or not willing to do."

Garcia made sure to clarify where she stands on the topic.

"Regardless of when he acts, I think it is the absolute wrong thing to do," Garcia said.

The fight over immigration has been the most bitter in Garcia’s scrap with her most formidable primary opponent, former New Hampshire state senator Gary Lambert. Garcia and Lambert have come to blows over the air and in their sole debate over Lambert trying to stitch the scarlet "A" for amnesty onto Garcia for her signing her name on a resolution last year calling for comprehensive immigration reform.

"Unfortunately, people have said this is one of the most negative and vicious campaigns of character assassinations that they’ve seen in this state coming from his campaign," Garcia said.

Garcia and Lambert’s brawl reached its crescendo when Garcia borrowed a page out of Ronda Rousey’s playbook. 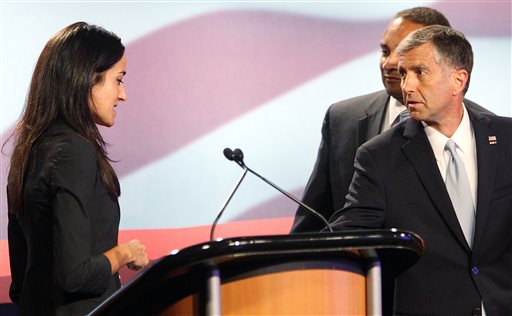 "I’ve been running as an unconventional candidate and new generation of leadership. It was just a moment where after the debate, I had to reply and defend myself in front of all of our major papers that called his attacks completely blatant lies and baseless claims coming from his campaign," Garcia said.

"So I felt, why not have a little self respect, not really for myself, but for the values and policies that I’ve been espousing and working towards with all of my colleagues. The fact that he’s pretending I’m something I’m not, it was offensive," Garcia said.

It was apparent that not everyone in attendance caught Garcia standing up for herself. One visitor in attendance didn’t even know who Garcia was.

He came for the event’s special guest, Sen. Ted Cruz.

Regardless of the difference in pulpit experience, Garcia’s potential Democratic opponent, Rep. Ann Kuster, has a last name that writes its own ads. If homophone jokes aren't your speed, maybe Kuster tweeting that she signed her own birthday card and her not being able to point to Benghazi on a map work just as well for attacks.

Garcia’s collection of endorsements from not only Cruz, but also from fellow border hawks Iowa Senator Chuck Grassley and Texas Governor Rick Perry, is not only impressive for a 31 year-old rookie congressional candidate. It's made Lambert’s Hail Mary pass of trying to tie Garcia to amnesty appear even more ludicrous.

Steve Given from Jaffrey, N.H. came to Sunday’s event to decide which candidate he’d support in the primary, but the Cruz co-sign spoke volumes.

One person who had made up his mind, albeit only three days before Sunday’s event, was former New Hampshire state senator Jim Luther. Until the Wednesday before, Luther was in Lambert’s camp. The nastiness of Lambert’s campaign, combined with how Garcia stayed composed under fire and was able to present her argument, swayed Luther’s endorsement to the 31 year-old.

I think this is the broader range of the electorate to which Luther was referring:

As a Hispanic conservative woman with an exceptional biography and legislative experience, Garcia has a big, fat target on her back. Thus far, she’s proven she can plant her feet and take a hit, but only time will tell whether she will be able to convey her message of "opportunity for all" to a wider electorate. Tuesday’s primary will be her first test. But Garcia has a supporter that not even the Ted Cruz can claim.

Happy to have the endorsement of Miss NH 2013 @SamanthaRusso01! She is also a member of my Women's Coalition. pic.twitter.com/r4rGQ5fHrG — Marilinda Garcia (@MarilindaGarcia) September 3, 2014

"It’s a pretty rigorous process, you have to put yourselves out there, answer a lot of questions, perform on stage, and have poise, and present yourself well. To the extent I can highlight being a part of the political process and she as a leader of that stature and honor, I’m really happy about (her endorsement)," Garcia said.