President Donald J. Trump and his administration were widely mocked on social media this week after announcing a meeting with the 2018 World Series Champion "Boston Red Socks."

Official White House website announces it will host the "Boston Red Socks." Has been changed. pic.twitter.com/shCwSFnEOJ

Big whoop. I was initially inclined to dismiss the gaffe as an innocent typo, or perhaps yet another example of the Fake News Media's militant campaign to overthrow a legitimately elected president. Until I saw the following post on Twitter, a popular social networking website:

If you thought calling them the "Red Socks" was bad…. OMG. #WorldSeries pic.twitter.com/hCFY6Vt20A

I'm sorry, but this is a deal breaker. I can no longer continue to support a president who abides such an egregious gaffe on his watch. Equating baseball's World Series with the World Cup, an international soccer competition in which teams from France and Belgium(!) regularly outperform the United States, is a sin I can't forgive.

Soccer, for those who don't know, is "global sport" characterized by low scores and matches that frequently end in draws, with neither side being declared the winner. The so-called "beautiful game" is rife with tedious "action," and involves an exorbitant amount of whining, often combined with extravagant faux-suffering over an alleged "injury." America, a country infused with a passion for winning, dominance, and unrelenting brawn, does not excel at soccer, for obvious reasons.

The sport, however, has found a considerable fanbase in this country among select demographics, such as: liberals who hate America, liberals who studied abroad, liberals who didn't study abroad but still want to appear "cultured," and liberal white men who lack the natural athletic ability to excel at real sports. Like many activities popular among these demographic groups, soccer is a moral abomination.

I might have been able to forgive Trump's negligent leadership if the "World Cup" gaffe had been an isolated incident, absent any disturbing context. But when you consider the fact that Trump actually played soccer in high school, the benefit of the doubts goes out the window. And that's why Donald Trump is no longer my all-time favorite president. 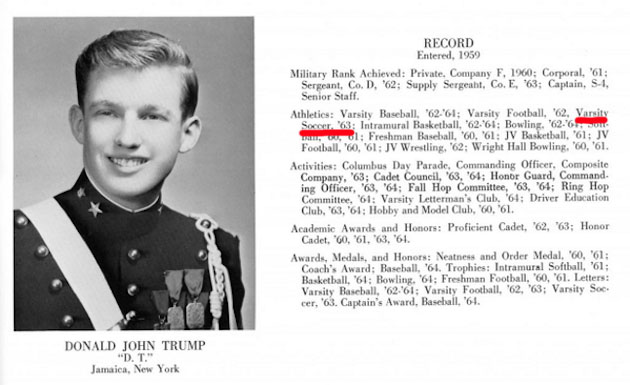