Democrats: Koch Brothers to Blame for Every Major Problem in the World

Democrats are obsessed with libertarian philanthropists Charles and David Koch. They seem convinced that the brothers are the embodiment of pure evil.

Senate Majority Leader Harry Reid (D., Nev.) has accused them of being "un-American" from the floor of the United States Senate and has suggested that they are to blame for basically every bad thing that has ever happened, ever.

In the past several weeks, Democrats have blamed the Koch brothers for:

Reid suggested that the events in Crimea may have "unfolded differently" if not for Republican "obstruction" on an aid package for Ukraine. Why were Republicans obstructing? "In order to protect the Koch brothers and billionaires like them," Reid said.

Reid’s statement in response to House Speaker John Boehner’s (R., Ohio) decision to establish a select committee to investigate the Benghazi attacks mentioned the Kochs in the second sentence. The new committee was a "political circus" concocted by Republicans, who are only interested in "protecting the Koch brothers," Reid said.

Reid said the "multizillionaire" Koch brothers are the "main cause" of climate change. "Not a cause," Reid said. "The main cause."

Senator Bernie Sanders (Socialist, Vt.), a favorite to win the Democratic presidential nomination in 2016, incoherently suggested that the Koch brothers were responsible for the emerging scandal at the Department of Veterans Affairs.

"Right now, as we speak, a concerted effort to undermine the VA," Sanders said. "What are the problems? The problems are, is, that all of these are large, governmental institutions and you have folks out there now, Koch Brothers and others, who want to radically change the nature of society, and either make major cuts in all of these institutions, or maybe do away with them entirely."

The Dangerous Proliferation of Hospitals in America

In March, liberal groups and local Democratic politicians protested outside a New York City hospital that received a $100 million donation from David Koch. Seriously, that happened. 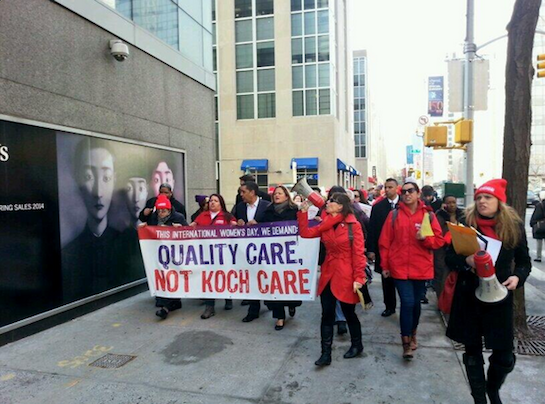