President Trump appears set to announce the United States' departure from the Iran nuclear deal, and thus the deal's supporters are working hard doing something they are admittedly very good at: crafting narratives for the media and political class.

One of their main #narratives is this one, encapsulated beautifully in a New York Times headline last night: 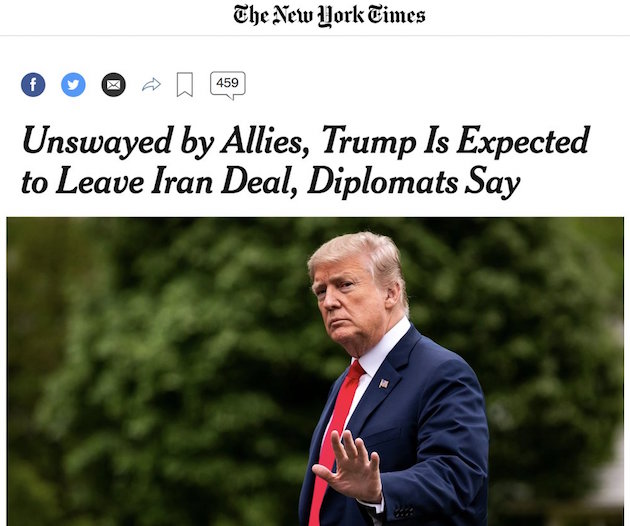 This idea is being reiterated everywhere today by embittered deal supporters:

Beyond the potentially catastrophic consequences with Iran, Trump's decision is devastating to U.S. credibility globally. After this, why would anyone trust an international agreement that the U.S. negotiates?

President Trump’s decision unravels the signature foreign policy achievement of Barack Obama, isolating the U.S. among its allies and leaving it at even greater odds with its adversaries in dealing with the Iranians https://t.co/avcNxEDWre

This is a high quality #narrative—it is simple and sounds plausible. Trump is alienating our allies. That is not good!

Except that he's not. He's actually doing right by our allies—by our allies in the Middle East, those who are suffering the most harm and danger from the deal, namely Israel and the Gulf Arab states.

The deal's supporters appear to only designate countries our allies if they were involved in lobbying the Trump administration to preserve something the Obama administration imposed on the United States against the wishes of Congress and the American people.

To be sure, western European countries are our allies—but they are not our only allies, and especially when it comes to the Iran deal they are not the allies who matter most.

The allies who are upset about our departure are the distant and cynical western European countries who have little to lose from an Iran unleashed in the region, and much to gain from access to de-sanctioned Iranian markets. Their protests are important and ought to be handled respectfully, but they are less important and meaningful than the protests of allies who are in Iran's crosshairs.

Think of it this way: When it comes to North Korea, the concerns of which allies matter most—South Korea and Japan, or France and Germany? When it comes to, say, protecting western Europe from Russia, whose views are most important—those of France and Germany, or those of Israel and Saudi Arabia? Iran deal supporters would have you believe that the more distant a country is from a region, the more its interests count.

Leaving the Iran deal is a great moment for American diplomacy—a moment of loyalty to our friends and a demonstration of strength on the world stage. Our alliances will be strengthened and our isolation reduced, no matter how many times the Echo Chamber and the New York Times declare the opposite.