DreamWorks CEO and major Obama donor Jeffrey Katzenberg is forcing Lassie, the beloved American collie, to endure a grueling publicity tour in an effort to turn a profit for his struggling movie studio. DreamWorks acquired the rights to the storied franchise in 2012, and Katzenberg is determined to turn Lassie into a "merchandizing star" in order to milk the innocent pooch for all she’s worth. According to the New York Times:

Studios typically revive old characters with new movies. But DreamWorks Animation dismissed that idea, aware that Lassie’s rural escapades would have little relevance for viewers now keen on explosions, aliens and superheroes. Instead, the studio decided that the best hope for making money from Lassie was to make her a merchandising star, and it turned to a suitably old-fashioned tactic to prepare an onslaught of products next year: the publicity stunt.

Katzenberg, who has donated millions to President Barack Obama and other Democratic candidates and committees, has been doing all he can to exploit the cheap canine labor for profit, including hitting up other celebrity Obama donors for favors:

Resuscitating the character is such a priority that even Jeffrey Katzenberg, the studio’s chief executive, is working the phones. He called Harvey Weinstein and persuaded him to put Lassie on a coming episode of "Project Runway." Mr. Katzenberg has also pitched the dog for a guest spot on "The Amazing Race."

Other items on Lassie’s brutal, nationwide PR schedule include an appearance on Ryan Seacrest’s radio show, a silly video of Lassie pretending to be an intern at People magazine, and Vanity Fair feature on how "Lassie’s Hair Regimen Is On Par with Kate Middleton’s." 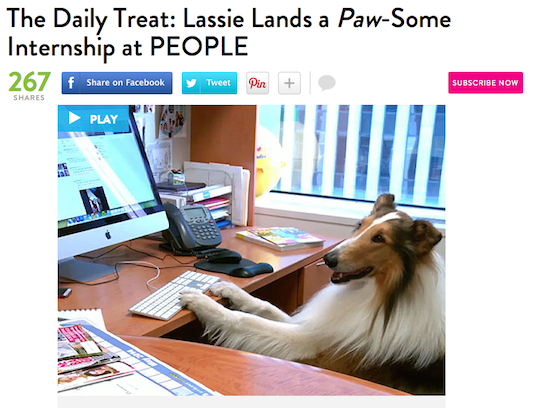 The Times described a particularly harrowing scene of animal torture at a Fox studio in Los Angeles:

Maybe it was the three publicists in tow. Maybe her hairdo was wilting under the hot television lights. Maybe a dog, even a showbiz one, was just not meant to be a meteorologist.

Whatever the reason, Lassie seemed unfocused as the cameras rolled last month at KTTV, the Fox affiliate here. Booked to help give the weather report, she woofed off cue and let loose a torrent of drool. "I’m not sure," a Fox anchor said as the segment ended, "but I think Lassie is annoyed."

No matter. The publicists cooed their approval, deciding that the appearance had done its job: Lassie had inched a bit closer to a comeback. "Good work, gorgeous," said one of the public relations people, Ame Van Iden, giving her client a pat on the snout.

Poor pooch. It would seem the liberal war on animals knows no bounds. Having already targeted the likes of bald eagles, adorable kit foxes, baby tortoises, bats, and rabbits, the left-wing donor class is determined to inflict its campaign of suffering on the canine community, just so it can add a few dollars to its bottom line.

DreamWorks hopes the campaign will generate tens of millions in revenue, which it desperately needs after posting loses in back-to-back quarters due to Katzenberg’s subpar leadership skills. It doesn’t help that Katzenberg is the subject of multiple Securities and Exchange Commission investigations into questionable activity ranging from suspicious stock trades to suspected bribery in China, a country where dog meat is widely consumed.