Let's take a moment to say thanks that the hardest rapper working today was able to escape Killa Cali alive.

According to TMZ, The Hairweave Killer was detained after TSA agents uncovered evidence of Tauheed Epps’s famous affinity for purple drank. 2 Chainz was in his usual high spirits when he left booking.

Always turning that negative into a positive, that 2 Chainz.

He documented that he had bond money in addition to the promethazine that caused his arrest.

The amount of green found on his person was less than an ounce. Perhaps the alleged tree was brought down from the Bay Area where Chainz headlined Summer Jam and lauded the quality of NoCal weed. Cali kush is a favorite among rappers across America.

Chainz almost wasn't able to make it out of the Bay Area alive. News outlets were quick with initial reports that Chainz had been shot and robbed after his set despite tweets to the contrary in real time from the rapper himself.

Then the reporting was clarified: Chainz was merely robbed (as if that's better). But 2 Chainz is firmly denying anything happened, other than just getting lit in the figurative sense.

Rule# 3 we definitely got geeked up in San Fran , best smoke in the world. 2 blessed 2 stress

The rapper was pulled over for marijuana possession in Maryland earlier this year. County police posed with the rapper for a mid-processing photo. It’s surprising more police don't pull over celebrities to score a photograph. 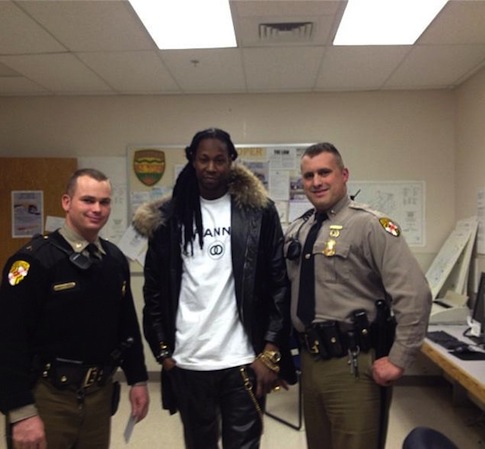 Police must have an eye out for Chainz. During the dust up over NSA leaker Edward Snowden, Chainz dropped his latest single, "Feds Watching." No wonder he looks fresh as hell because he knows the feds are watching. Those two chainz the rapper dons must give him the ability to see the future.

Chainz should just play it safe and fly private again.