"What we say on the Democratic side is we can not waste this historic moment, this singular opportunity," Durbin said on the Senate floor while discussing the legislation proposed by Scott, who is black. "Let's not do something that is a token, half-hearted approach."

As Durbin is almost certainly aware, "token" is a problematic, racially charged term used to denigrate the accomplishments of people of color.

Scott responded by asking whether Democratic leaders were still wearing the kente cloths they donned for an embarrassing photo op earlier this month. He also suggested that it wasn't such a bad idea for a police reform bill to be drafted by "a person who has faced racial profiling by police, been pulled over dozens of times, or been speaking out for YEARS" on the issue.

It's not the first time Durbin has experienced "white fragility" when forced to confront the accomplishments of a nonwhite Republican. During the George W. Bush administration, for example, Durbin led the 2003 effort to filibuster U.S. court of appeals nominee Miguel Estrada, who was widely considered to be a top candidate to be nominated to the Supreme Court one day.

Emails revealed that as early as November 2001, Democratic lawmakers and liberal activist groups had been debating whether to filibuster Bush's judicial nominees. At the time, a Durbin aide emailed his boss to note that liberals viewed Estrada as "especially dangerous" because "he is Latino."

It is also unclear why Durbin is apparently afraid to stand close to his colleague Sen. Cory Booker (D., N.J.). The following photo (and accompanying visual analysis) speaks for itself. 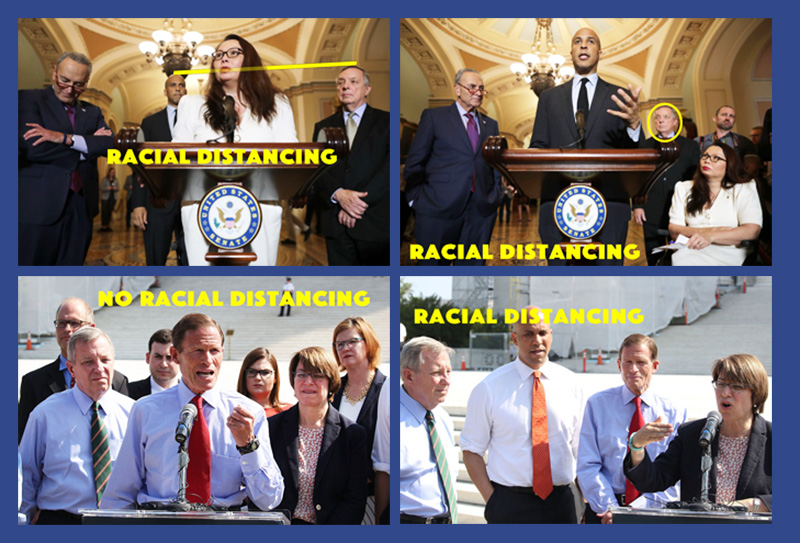