Yahoo News on Wednesday paraphrased a quote by Sen. Lindsey Graham (R., S.C.) in a way that made it appear like he made a sexist remark about one of the women who accused Supreme Court nominee Brett Kavanaugh of sexual misconduct.

In an interview at the The Atlantic Festival, Graham defended President Donald Trump's recent criticism of Christine Blasey Ford.

"Everything he said was factual. He's frustrated his nominee has been treated so badly," Graham said.

"Factual? It was a personal degrading attack on someone who is a private citizen," responded interviewer Jeffrey Goldberg, editor in chief of The Atlantic.

"You know, here's what's personally degrading," Graham pushed back. "‘This is what happens when you go through a trailer park with a $100 bill.'"

The audience gasped at the quote, leading Goldberg to clarify that Graham was reciting a famous line said by someone else. Graham's quote was actually a reference to a comment made by James Carville, an adviser to former President Bill Clinton, about Paula Jones, who accused Clinton of sexually harassing her in 1991.

"If you drag a hundred dollar bill through a trailer park, you never know what you'll find," Carville said of Jones, after she went public with her accusation.

"Most of you all are too young to remember this," Graham joked to the audience.

When Yahoo News posted video of the exchange on Twitter, however, it paraphrased Graham's quote as "Everything he said was factual … this is what you get when you go through a trailer park with a $100 bill," giving the impression that Graham was referring to Blasey Ford. 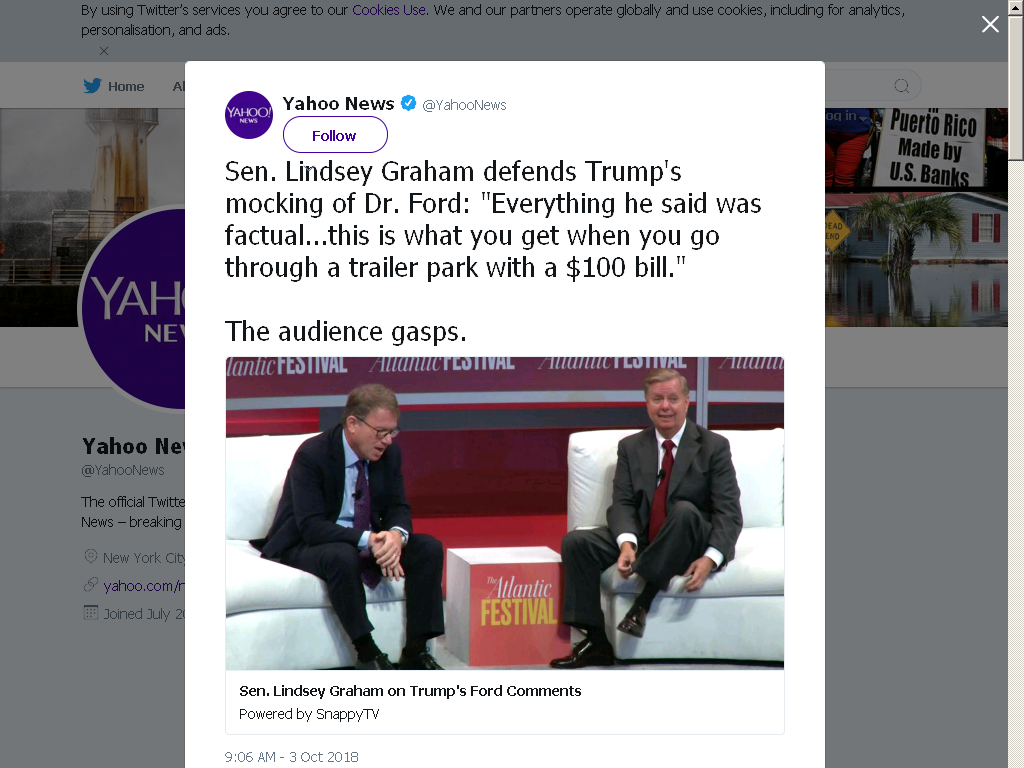 Liberals and journalists on Twitter also spread tweets giving the false impression that the "trailer park" quote was from Graham. Only some deleted their tweets and apologized.

Lindsey Graham on Christine Blasey Ford: "This is what happens when you go through a trailer park with a $100 bill."

And on Donald Trump viciously mocking a sexual assault victim: "Everything he said was factually true." pic.twitter.com/ZPJEDJaxjg

Graham defends Trump's insulting of Dr. Ford last night. "Everything he said was factual," he says. "This is what you get when you go through a trailer park with a $100 bill." Audience gasps. Somebody in my row: "Are you fucking kidding me?"

"This is what you get when you go through a trailer park with a 100 dollar bill".

Apologies – I deleted my tweet about Lindsey Graham's comment, which confused me and the Atlantic audience. He was arguing that Trump was "factual" regarding Blasey Ford, unlike James Carville when he made his "trailer park" comment about Paula Jones.

.@LindseyGrahamSC just said: this is what you get when you walk through trailer park with a hundred dollar bill.
When discussing allegations against Kavanaugh and the president mocking Dr. Ford at a rally last night.
What does that even mean?

Yahoo News later deleted its own tweet and acknowledged that it "did not accurately reflect the context" of Graham's comment.

We deleted a tweet that did not accurately reflect the context of Lindsey Graham’s quote in the below video clip. pic.twitter.com/U5ihRhiP27

Ford has accused Kavanaugh of drunkenly groping her and trying to take off her clothes before she escaped while they were at a high school party in the early 1980s. Kavanaugh denies her allegation, which remains uncorroborated.