Elizabeth Warren campaign press secretary Alethea Pieters Harney—then known as "Alethea Pieters"—was earning an annual salary of $78,000 from the state of Massachusetts in 2008 for her work in the executive office of administration and finance, according to records updated Wednesday by the Boston Herald.

Harney has since received criticism for her salary from Twitter users.

Harney’s personal Twitter account, @BostonAlethea, is now protected, and her tweets are only available to confirmed followers.

Before it was locked, Harney’s personal Twitter page included frequent references to "Blasians" ("Black Asians"), racially charged taunts directed toward Mitt Romney (whom she referred to as "Romneezy"), shout-outs to her "Saudi sisters" and her "multiracial peeps," and observations about people who "look like they could be Indian."

Harney has also mocked white Iowa farmers in interviews, saying, "A lot of them have never seen anyone like me."

On her Twitter profile, the Warren spokeswoman refers to herself as "The official voice of Blasians in Boston." 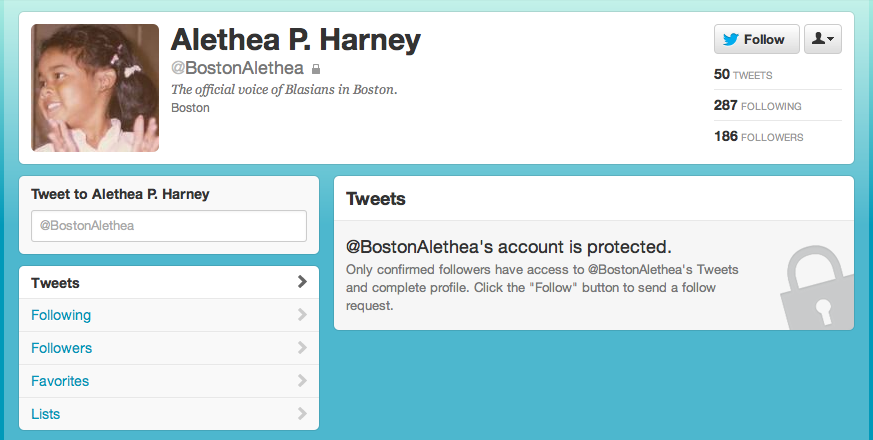 On July 5, 2011, Harney replied to a friend’s Tweet announcing that "4 percent" of the guests at a wedding were Indian. Harney wrote, "does that tally include people who look like they could be Indian?" followed by a winking-face symbol.

Harney’s current boss famously declared that she knew of her American-Indian heritage because her grandfather had high cheekbones. Questions have been raised as to whether Warren used that "heritage" to her professional advantage.

Harney also made a disparaging remark on Twitter about the physical appearance of Pippa Middleton, writing that "I’m not trying to hate, but JLO, Kimmy K, and Blasians across the nation just don’t get the hype re:pippa’s tush."

Warren has received the endorsement of the National Organization for Women’s political action committee.

Harney also repeatedly referred to Republican presidential candidate Mitt Romney as "Romneezy" or "Rneezy" in response to a Politico analysis on his appeal to African-American voters.

Omar: Biden Is Not Progressive Enough