A former senior official at a pro-Iran activist group has been a member of the Department of Energy’s National Nuclear Security Administration (NNSA) since June 2012, sparking concern among proponents of a tough U.S. policy stance toward Tehran.

Patrick Disney worked as an assistant policy director at the National Iranian American Council (NIAC), an Iranian-American advocacy group long suspected of lobbying on behalf of the Iranian regime.

Disney sought to accommodate Tehran’s nuclear ambitions and later became enmeshed in a lawsuit that raised questions about the group’s potentially illicit lobbying activities during his two-year tenure with NIAC.

Now Disney is working for the NNSA, which overseas "the management and security of the nation’s nuclear weapons, nuclear nonproliferation, and naval reactor programs," according to its website.

Disney’s new role dealing with sensitive nuclear issues is raising red flags among some government insiders and former intelligence officials who worry that he may be toeing Iran’s line from within the Obama administration.

"Putting an alumni of NIAC on a nuclear policy desk is the domestic policy equivalent of having David Duke monitor civil rights," said Michael Rubin, a former Pentagon adviser on Iran and Iraq.

Disney—who has personally met with Iranian President Mahmoud Ahmadinejad—could be privy to classified information in his new role at NNSA, and he is likely offering top NNSA brass advice on Iran.

Critics called this situation dangerous given Disney’s past advocacy work and sympathetic writings on Iran.

"This is one of the single most bizarre appointments I’ve ever seen and I’ve been around a long time," said one former senior Capitol Hill aide with personal knowledge of Disney. "I guess someone was impressed with what he’s said."

Disney, who became an NNSA Graduate Program Fellow in June 2012, now conducts "analyses of proliferation threats," which could include Iran, according to his LinkedIn profile.

Disney also has "managed implementation of $2M nuclear forensics program" and has "coordinated interagency planning for major events, including creation of the briefing book for the Secretary of Energy and U.S. delegation to the 2012 [International Atomic Energy Agency] General Conference," according to the profile.

As a NNSA graduate fellow, Disney is a full-time salaried employee.

"This 12-month, full-time, salaried fellowship program provides participants with specialized training and practical experience on projects and initiatives that contribute to a safer world," according to a description of the program on the NNSA’s website.

"In addition to gaining valuable experience working with federal government programs, participants have opportunities to collaborate with the U.S. Department of Energy (DOE), as well as other government agencies, national laboratories, and non-governmental organizations," the description states.

Disney did not respond to a Washington Free Beacon request for comment on his precise role and duties at the NNSA. A DOE representative also did not respond.

"I presume he has a security clearance now or will get one," said the former Capitol Hill aide. "It’s an extremely strange thing."

"The question is what will he be doing? What will he has access to?" asked the source. "There’s a lot there that’s quite wrong."

Disney has long pushed to roll back U.S. sanctions on Iran and increase engagement with Tehran’s radical leaders.

He also offered kind words about Ahmadinejad in a 2010 letter to the New York Times.

"I saw a man wholly convinced of the righteousness of his actions, not cynical in the least," Disney wrote about his powwow with Ahmadinejad. "His combination of earnestness and cleverness convinced me of the need for the United States to drastically alter its current approach."

"It’s not enough to wait for sanctions to work; nor is half-hearted engagement sufficient," he wrote. "The United States must commit to one of only two remaining options: war or substantive and prolonged negotiations."

He has speculated that "Western intelligence agencies" may be "planting fraudulent evidence of an Iranian nuclear weapons program," according to a 2010 post on his personal blog, Talking Warheads.

"Is it possible that American, Israeli, or some other intelligence agencies might have provided taken [sic] advantage of that and provided fabricated intel? Yes," he wrote.

"Disney’s writings expose him as a conspiracy theorist, readily and publicly suggesting that the United States would fabricate intelligence to entrap those poor, innocent Iranian nuclear scientists," Rubin said.

Disney also was named as a central figure in a longstanding lawsuit focusing on NIAC’s potentially illegal lobbying activities.

He was caught altering NIAC calendar appointments and other materials to make it appear as if the organization was not engaging in lobbying activities, according to court records.

The revelation led the judge in the case to express concern.

"The only alteration that gives this Court pause is that Patrick Disney, a NIAC employee, changed at least 82 references to ‘lobbying’ in his calendar entries to say ‘legislative direct’ in February 2010," the judge stated in a 2012 opinion. 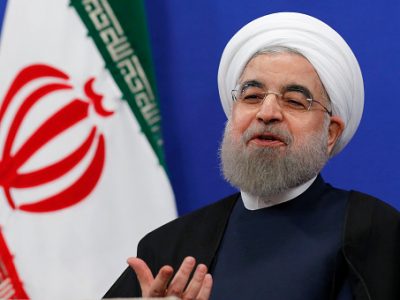