Twitter attached a warning reserved for graphic, gory, or violent content to a pro-life video from the Trump campaign, prompting accusations of censorship against the social media giant.

Hours before Trump is scheduled to become the first sitting U.S. president to attend the annual March for Life, his official campaign account posted a video showing couples with newborns and a pregnant woman looking at an ultrasound of her baby.

"Life is the greatest miracle of all. We see it in the eyes of every new mother who cradles that wonderful, innocent, and glorious newborn child in her loving arms," Trump says in the video. "Let us work together to build a culture that cherishes innocent life."

The video was flagged as containing "sensitive material," despite showing no sexual, violent, or hateful imagery. 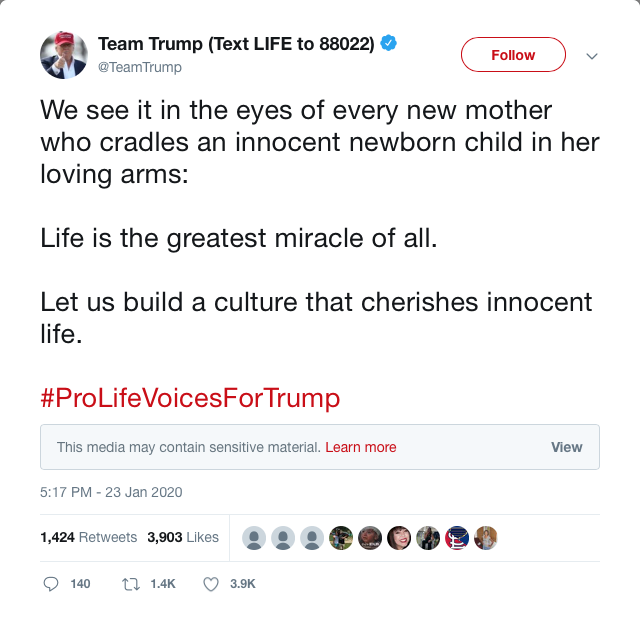 Such warnings are reserved for graphic or hateful content.

"You may not post media that is excessively gory or share violent or adult content within live video or in profile or header images. Media depicting sexual violence and/or assault is also not permitted," the social media giant says in its guidelines. "Our aim is to limit exposure to sensitive images and videos and to prevent the sharing of potentially disturbing types of sensitive media."

The Trump campaign said Twitter's content warning amounted to "censorship" and an attempt to hinder pro-life messages on the site.

"Twitter’s censorship of the video launching President Trump's pro-life coalition is a perfect example of the left stomping on any idea they don't like," spokeswoman Kayleigh McEnany said. "This video shows children and families and highlights the sanctity of life. President Trump is the most pro-life President ever and his support for unborn children cannot be silenced."

Not all videos discussing abortion have been flagged as potentially "sensitive." Planned Parenthood videos featuring women discussing their abortions automatically play for any user.

Ylonda. Nick. Hannah. Brittany. Four people living full and empowered lives because they had the freedom to access abortion. Their stories are a call for compassion and self determination. Watch the full film: https://t.co/7DsppFvVNP #OursToTell pic.twitter.com/XVlHDUZdqB

Friday's episode is not the first time social media platforms have removed or hidden pro-life messages. In June, Twitter banned activist Lila Rose from posting videos on the site. In 2018, Facebook blocked pro-life organizations from advertising on the site.

A spokeswoman for Twitter said the video was flagged "in error" and the settings have since been changed.

Some activists called on the company to apologize. Terry Schilling, executive director of the American Principles Project, said Twitter's history of censoring pro-life content casts doubt upon its explanation for the warning label.

"This is one of the biggest moments in the history of the pro-life movement and Twitter decides to try and shut it down," Schilling said. "Jack Dorsey [Twitter CEO] owes the pro-life community an apology."

Trump is scheduled to address the March for Life at noon.